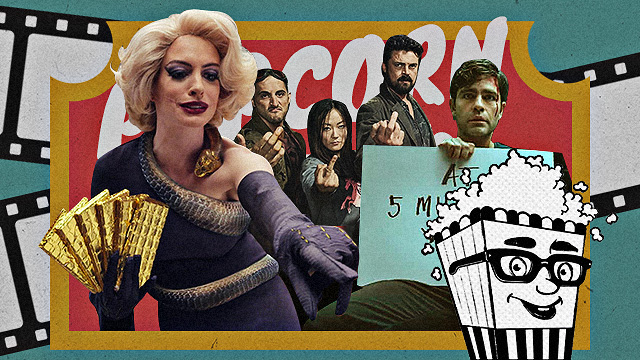 From Anti-Superhero Heroes to an Erm, Pandemic Movie: The Must-Watch Titles to Stream This Weekend

Is The Flu on Netflix worth watching?

(SPOT.ph) It is finally the weekend! And better yet, it's the first weekend of the Christmas season. Okay, that kind of made us panic a bit, too, so if you're in need of some time-out this weekend, Popcorn Pedro wraps up some of the coolest titles to check out online.

Popcorn Pedro says: Looks like people have a thing for stressing themselves out—which is probably why this 2013 movie about a virus outbreak is currently at the top of the PH Netflix trending list. Hey, can't say I didn't enjoy watching 2012 at the height of all that 2012 apocalypse talk.

The Flu is arguably one of the earliest big-ticket apocalyptic disaster movies to come out of South Korea, way before Train to Busan came crashing in. The H5N1 virus—remember that one, from way before COVID-19 was a thing?—has made its way to Seoul and anyone who is infected dies in 36 hours. Unsurprisingly, chaos ensues and yup, it looks like authorities are shooting dead anyone with infections. Plus, to kick the stakes up even higher, the story follows a doctor and a young girl. Definitely the type of thrilling watch if you need a metaphorical adrenaline shot.

Popcorn Pedro says: If you think the Sweet Girl plot twist was insane, wait till you see this one Netflix dished out in this mini-series. Adrian Grenier plays Nick, seemingly your average family man—until he is kidnapped and a video of him beat up with a sign accusing him of terrible things (Read: Toying with women online, killing one) starts to go viral. Best part? Wait, I meant, the clincher: If the video gets to five million views, he dies. Exciting stuff, people.

His sister Pia Brewer (Zoe Kazan) and wife Sophie (Betty Gabriel) meanwhile, set off to try and save him, only they aren't so sure what to believe either. Come for the hardcore catfish premise, stay mostly for Kazan's performance and that surprise ending.

Popcorn Pedro says: If you spend 24/5 already stressed during the weekdays, then mellow out with this remake of a childhood classic. We bet Anjelica Huston as the Grand High Witch is still in your nightmares—time to replace that with the Anne Hathaway version!

This updated version still stays true to the Roald Dahl classic, if only with much more CGI. It stars Jahzir Bruno as the Hero Boy and Octavia Spencer as the Grandmother. And even Stanley Tucci pops up as Mr. Springer! Yup, it's a slight The Devil Wears Prada reunion.

Popcorn Pedro says: Billie Butcher (Karl Urban) had me at that Spice Girls analogy alone. In a world where superheroes are practically gods (Read: similar to untouchable, can-do-no-wrong politicians) and are managed by a corporation called Vought International, Butcher has decided that it is time to give them a lesson. This sets off an absolutely crazy-brutal, cutting, and hilarious fight between Butcher's gang, called The Boys, and the Vought's legendary Seven, led by the ultra arrogant Homelander.

The first season dropped on Prime back in 2019, with a second season soon following. A third season has also been greenlit, so there's no need to worry if you get addicted.