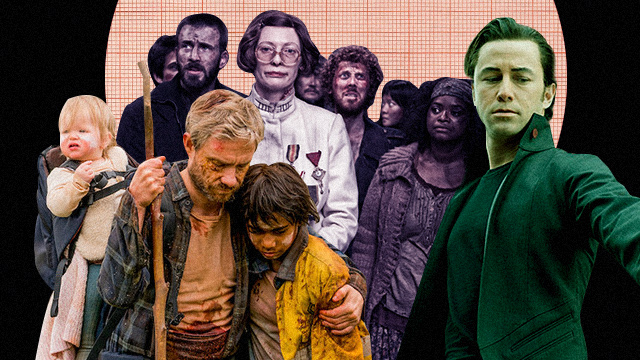 (SPOT.ph) Living in the real world can feel pretty miserable nowadays. When the going gets tough, watching dystopian movies can give you a form of catharsis because no matter how bad things are in the present, they can’t be worse than the predicaments these movies’ protagonists find themselves in. Just look at how popular survival series Squid Game is. If you need some other titles to fill the void, these flicks will be right up your alley.

Stream these dystopian movies on your next movie night:

Bong Joon Ho of Parasite fame directed this film, which was adapted from the French novel Le Transperceneige. Starring big names like Chris Evans, Song Kang Ho, and Tilda Swinton, critically acclaimed Snowpiercer made the rounds in various film festivals and won awards both in Korea and abroad. The film is set in a dystopian future where technological advances to help stop global warming have caused an everlasting ice age. What’s left of humanity now lives on a train that never stops running, but the class divides still exists with the rich in the front cars and the poor suffering in the tail cars. When enough is enough, tail passenger Curtis (Evans) ends up becoming the face of the revolution. Will the rebels survive on their way to the front cars?

This Spanish film is a raw and gory commentary on capitalism. It revolves around a vertical prison cell multilevel tower with prisoners changing levels every month. Food gets served from the topmost level and trickles downward with only the leftovers getting passed to the lower cells. This means prisoners in the bottom cells get no food. Protagonist Goreng (Iván Massagué) enters the tower for six months in exchange for receiving a diploma, but as the film continues, it soon becomes apparent that he has bigger things to worry about aside from getting his prize: It’s a bloody struggle for survival as Goreng deals with starvation and violence.

This film is the sequel to the 1982 sci-fi cult hit, Blade Runner. While it might come across as a heavy action flick, Blade Runner 2049 is actually more of a slow-burn thought piece that questions what it is to be human. Set 30 years after the original film, it tells the story of bioengineered humans called replicants. K (Ryan Gosling) is a replicant himself, but he works as a blade runner whose task is to bring in rogue replicants and kill (a.k.a. “retire”) them. When he discovers a replicant corpse with signs of having given birth—a feat deemed impossible—he’s ordered to find the child and retire it. But as he goes about his mission, K uncovers secrets that make him doubt himself.

In this dystopian world, the Korean won has lost its value, and the country is in chaos. Jun Seok (Lee Je Hoon) just got out of prison for a failed theft he committed with his friends. They were able to escape with the money, but now that the won has fallen, the cash is useless. In an effort to inject joy back into their lives, Jun Seok plans a new heist with his friends, this time stealing from a gambling house running on US dollars. Things go awry when a contract killer (Squid Game’s Park Hae Soo) starts hunting them down.

This unique sci-fi thriller premiered at the Sundance Festival in 2019 before eventually appearing on Netflix. In this exhilarating yet heartbreaking film, humanity has just undergone an “extinction event.” Now a robot powered by AI is tasked to start humanity’s journey all over again. Mother (Rose Byrne) raises a human embryo she refers to as Daughter (Clara Rugaard), doing her best to protect Daughter from the outside world. But when a stranger (Hilary Swank) appears in their midst, Daughter starts questioning who she is and forming a worldview of her own. The film is full of twists that will have you second-guessing what you thought you knew until the end.

Sherlock’s Martin Freeman helms this horror film, which was adapted from an Australian short film that premiered at the Tropfest Short Film Festival. In it, he plays Andy Rose, a man struggling to save his child in the midst of a pandemic where an unknown virus turns people into zombie-like creatures within 48 hours. After Andy gets bitten himself, it becomes a race against time as he must find someone to take care of his daughter before he succumbs to the virus and becomes a threat to her survival. But finding a good person on his journey is just as hard as avoiding zombies. Will Andy be able to make it in time?

In 2074, killing people has become hard because technological advances make it easy to track the bodies. The Kansas Crime Syndicate now sends people back to 2044 wearing hoods, where assassins called Loopers get rid of their enemies for them. If they end up surviving until 2074, the Loopers eventually get sent back to be killed by their younger selves. When Young Joe (Joseph Gorden-Levitt) meets his future self (Bruce Willis), Old Joe escapes before he knows it. Can Young Joe find him before it’s too late?

Denzel Washington and Gary Oldman star in this post-apocalyptic film set 30 years after a nuclear holocaust. Washington plays Eli, a survival expert and a fighter, wandering around the wastelands that were formerly the United States. He catches the ire of the villainous Carnegie (Oldman), who rules over a small town, when the latter realizes he has a book Carnegie wants to use to control humanity. But Eli has a mission of his own, and he won’t take Carnegie’s efforts lying down.

Directed by Neill Blomkamp, the same brains behind award-winning sci-fi film District 9, Elysium tells the tale of a polluted and contaminated Earth where only the poor are left to live and suffer. The rich stay in Elysium, a pristine space station where disease is a thing of the past, thanks to the power of new technology called Med-Bays. When Max (Matt Damon) gets exposed to radiation and is given only a few days left to live, he decides to sneak his way into Elysium to save his life.

Visual spectacle Ad Astra takes its audience to a future where a power surge randomly occurs and kills people. The source is traced back to a 29-year-old mission called The Lima Project, whose crew mysteriously disappeared somewhere near Neptune. Astronaut Roy McBride (Brad Pitt) agrees to go on a mission to Mars in an attempt to make contact with his father, H. Clifford (Tommy Lee Jones), captain of The Lima Project. The film follows his breathtaking journey through space and his rediscovery of what makes humanity important.