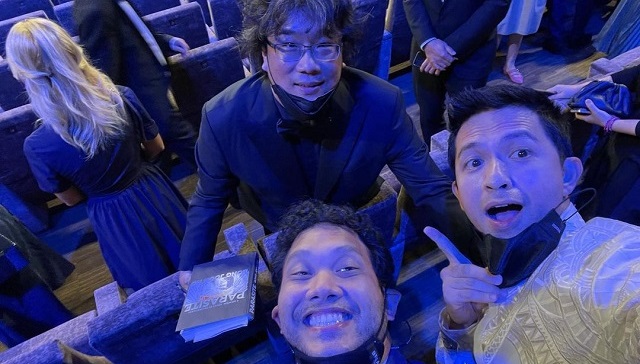 Seems the Parasite director approves of OTJ: The Missing 8!

(SPOT.ph) Dennis Trillo is living the dream in Venice, Italy, where On the Job: The Missing 8 just had its world premiere! On Instagram, he dropped a couple of pics from the 78th Venice International Film Festival—and it looks like he made a wholesome connection with Parasite director Bong Joon Ho. In one clip, you'll see the director and other industry greats praising Trillo's performance in the Erik Matti OTJ sequel. Best part? We can't get over Trillo referring to the South Korean director and film fest's President of the Jury as "Tito Bong." Yup, looks like we have a winner for the "Wala kayo sa tito ko" game!

In a clip Trillo posted on September 12, you can see Bong Joon Ho, German filmmaker Alexander Nanau, English actor Cynthia Erivo and Canadian actor Sarah Gadon congratulating him on the movie. Bong Joon Ho dropped two phrases, "We all love you" and "You're so great," in the short moment—so we totally get why Trillo captioned the post "Nananaginip ba ako???"

In totally understandable fan-boy fashion, Trillo posted pictures of him excitedly pointing to Bong Joon Ho after what looks like the awarding event. Turns out Trillo had the director autograph his copy of the Parasite: A Graphic Novel in Storyboards book, which contains Bong Joon Ho's hand-drawn storyboards for the Oscar-winning film.

"Mission Accomplished!!! Thank you Tito Bong!!!" wrote the actor for the first post, complete with all the exclamation points. Trillo posted another one of the two seated next to each other with him happily holding the signed book. "Labyu Tito Bong! Thank you for signing my book," was the cheeky caption.

Trillo plays Roman Rubio in the sequel to the 2013 sleeper hit. Rubio is another unwitting pawn in the prisoner gun-for-hire business. Rubio crosses paths with John Arcilla's Sisoy in the OTJ follow-up; Sisoy is a journalist and staunch believer in the government. And if you're wondering why they put Trillo in that prosthetic nose, well, it's because Direk Matti had gotten sick of the pretty-boy looks from Gerald Anderson in the first movie, he joked in the mini-series' press conference held by HBO Go.

The long-awaited OTJ sequel from Erik Matti first made waves after Arcilla became the first Filipino to win a Volpi Cup for Best Actor on September 12—and now we're living seeing Trillo be able to call the Bong Joon Ho "tito"!

Adventurer Savvy Seasoned Erik Matti Dennis Trillo Bong Joon Ho On The Job Staying In
Your Guide to Thriving in This Strange New World
Staying
In? What to watch, what to eat, and where to shop from home
OR
Heading
Out? What you need to know to stay safe when heading out