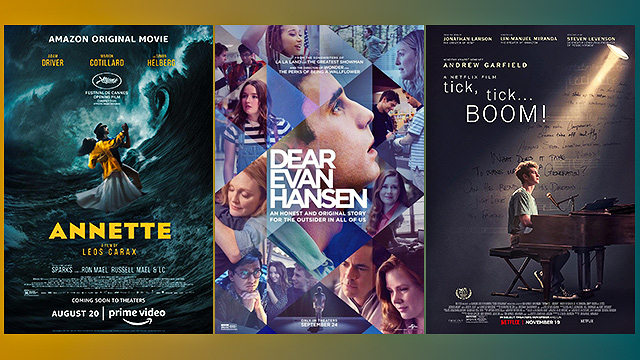 Front-row seats and no dress code!

(SPOT.ph) Do you miss watching musical plays in person? So do we, but live productions in the Philippines are still grounded by COVID, and traveling to Broadway and West End isn’t as easy as it used to be. Thanks to the top streaming services, you can just sit at home and watch the newest international musicals, from recorded theater productions to film adaptations and original musical movies.

Also read: 10 Fraud-Related Crime Titles on Netflix if You're Into Getting Conned

Here are new movie musicals on Netflix, HBO Go, and other streaming platforms:

Lin-Manuel Miranda has sure been busy. This 2021 American biographical musical drama film is his directorial debut. If you’re a theater buff who’s seen Tick, Tick… Boom! live on stage, you will enjoy Miranda’s film version with a singing Andrew Garfield playing the lead, Jonathan Larson. For the uninitiated, Larson is the late American composer, lyricist, and playwright who gave us the musical sensation, Rent. Tick, Tick… Boom! is based on his semi-autobiographical rock monologue, when Larson was on the brink of turning 30, wondering if he made the wrong career choice while navigating the pressures of love and friendship. He tragically passed away in 1996, on the night before the first public performance of Rent at the New York Theater Workshop.

Stream it on: Disney+

The 1957 musical just got the Steven Spielberg magic. Ansel Elgort and Rachel Zegler portray the star-crossed lovers, Tony and Maria, alongside a stellar cast. Set in mid-1950s New York, two gangs—the Puerto Rican Sharks and the American Jets—battle for control of the streets. The situation becomes complicated when one gang member falls in love with a rival’s sister. Fans will see several tweaks, but Spielberg’s remake stays closer to the original Broadway version than the 1961 film version. After a year of delay due to COVID-19, this more diverse adaptation finally danced into international theaters in December.

The gripping, psychological musical, Dear Evan Hansen, was launched on Broadway in 2016, and it earned Ben Platt a Tony for Best Performance by a Leading Actor in a Musical. He plays Evan Hansen, a high school student with crippling anxiety, depression, and social awkwardness. An acquaintance named Connor signs Hansen’s cast, and then takes his own life. The story links the two loners as Evan battles his inner demons, with standing-ovation performances such as “Waving Through a Window” and “You Will Be Found.” Five years later, the Tony and Grammy Award-winning musical was adapted to film. While we agree with critics who say that Platt, now 28, can no longer pull off looking like a teen, the mental health community and theater fans who were unable to watch the original will appreciate the screen adaptation of their beloved Evan Hansen.

Stream it on: Apple TV

Based on actual events, this Tony Award-winning musical tells the story of 38 flights grounded in Gander, Newfoundland, a small Canadian town on September 11, 2001. As the town hosts 7,000 stranded people, a.k.a. “come from aways,” into their community in the aftermath of 9/11, passengers and locals alike process the tragedy that just happened while finding love and hope in the new and unlikely bonds they form. This special live performance was filmed on Broadway in 2021 for an audience that included 9/11 survivors and front-line workers.

Stream it on: Amazon Prime and Apple TV

If you’re sick and tired of musical tropes and Disney-esque storylines, then you’ll be glad to know that award-winning French director Leos Carax has awakened from his hibernation. His rock opera Annette opened the Cannes Film Festival last year with his signature idiosyncratic cinematography, this time starring Adam Driver as a dark stand-up comic who falls in love with a world-famous soprano played by Marion Cotillard. The birth of their first child Annette, a mysterious little girl eerily but brilliantly portrayed by a puppet, turns their lives upside-down. Set in modern-day Los Angeles, this original musical is a journey of passion, love, and fame.

Hey, ’70s and ’80s kids! Did you hear about the former Talking Heads frontman’s 2019 Broadway show based on his recent album and tour of the same name? It was such a hit that Hollywood director Spike Lee decided to lend his powerful visuals and direct a film version. Watch David Byrne and a group of international musicians perform songs from the Broadway musical with wireless portable equipment. American Utopia premiered at several international film festivals in 2020 and received a limited theatrical release in the U.S. in 2021.

If this feels like Glee on steroids, you’re probably right. When Ryan Murphy watched The Prom on Broadway in 2019, he loved it so much he decided to adapt it into a film for Netflix. He gathered a star-studded ensemble led by Meryl Streep, James Corden, Nicole Kidman, and Andrew Rannells, who play down-on-their-luck Broadway stars shaking up a small Indiana town as they rally behind a teen who just wants to go to the prom with her girlfriend. The teen couple is played by Ariana DeBose (Alyssa) and newbie Jo Ellen Pellman, whose character Emma is loosely based on Constance McMillen, a then high-school senior whose school refused to let her go to the prom with her girlfriend. The Prom addresses LGBTQ+ prejudice and exclusion with glitzy musical numbers.

Minor spoiler alert: It’s a lot different from the original version. Lin Manuel-Miranda, who conceptualized the play, composed the music, and starred as the original Usnavi de la Vega in the 2008 Broadway version, helped director Jon M. Chu (Crazy Rich Asians) work on a lot of creative freedom for the film. Many original songs, dialogue, and characters were removed; many new elements were added, and the timeline was slightly tweaked. While it’s a feel-good production filled with sparkling numbers, it also fulfills its goal of highlighting the plights of New York’s Colombian-American community. Miranda fans, look for his cameo!

Stream it on: Disney+

Remember when the sung-and-rapped-through style of Hamilton became a Broadway hit in 2015? Miranda created a revolutionary moment in the theater when he transformed the cultural and political story of American founding father Alexander Hamilton into a score that blends hip-hop, jazz, R&B, and Broadway. While Hamilton continues to run in New York, Los Angeles, and other international locations, Disney+ got exclusive streaming rights beginning July 2020 for those who are unable to score tickets. It features a recorded production at The Richard Rodgers Theatre on Broadway in June 2016.

While this falls more under the animation genre, it would be a sin not to include Encanto on this list. The songs aren’t as memorable as the likes of Frozen (but see if you can catch the “Let It Go” Easter eggs) and Lin-Manuel Miranda’s previous compositions. But what makes Encanto one of Disney’s best works is how they tackle layers of family dynamics, from the plight of immigrants to childhood trauma. The plot centers on the Madrigals, an extraordinary family who live hidden in the mountains of Colombia in an enchanted home called the Encanto. The magic of the Encanto has blessed every child in the family with a unique gift—all except Mirabel. You will enjoy grooving to the cumbia and other Colombian rhythmic styles that bring life to this colorful production. By the end of the movie, you’ll realize why therapists and mental health groups have been fondly referencing Encanto since it was released.