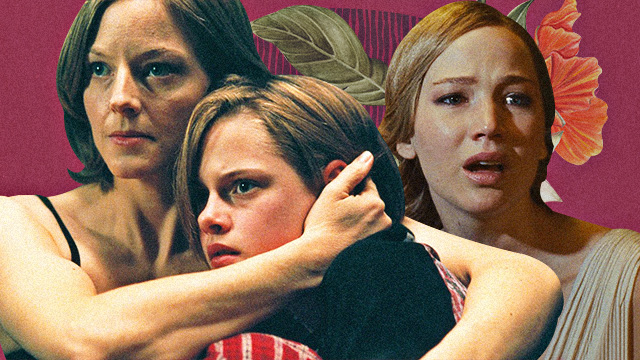 Mother's Day movies that aren't for the faint of heart.

(SPOT.ph) Mother’s Day is normally the time of year that we make a dedicated effort to relieve Mom of all stress, worry, and unhappiness. And in case you're still worried about what to get her, we even prepared a gift guide just for you. That’s your typical approach to Mother’s Day, anyway. If you want to be a bit more playful this year, we say treat Mom to these stress-inducing and heartbreaking maternity-themed movies for a change of pace. We picked out movies that highlight the importance of motherhood—they just so happen to be psychological thrillers and somber dramas. It’ll surely make it a Mother’s Day that Mom will never forget!

Also read: 10 Unforgettable Pinoy Movie Moms, Ranked by How Much We’d Like to Be Their Kid

Surprise Mom with these stressful and upsetting Mother's Day movies on streaming platforms:

Panic Room is an early-2000s David Fincher thriller, so you know what you’re getting yourself and Mom into. Unlike serial killer procedurals Se7en and Zodiac though, Panic Room is a single-location, home invasion suspense flick. Jared Leto, Forest Whitaker, and Dwight Yoakam star as burglars attempting to steal investor bonds from a four-story New York brownstone, but they’re unaware that a mother and child (played by Jodie Foster and a young Kristen Stewart) have trapped themselves in the panic room with said bonds. Despite the locations being small and compact, the stakes feel very high in this intricate game of leverage Fincher creates within the film.

Mother! is the type of incomprehensible psychological horror film that Mom would typically avoid, which is exactly why you should put it on for Mother’s Day. From visionary director Darren Aronofsky (the mind behind Black Swan and Requiem for a Dream), mother! offers a punishing slow-burn that aims to make us reflect on our relationship with God and (mother) nature. With Jennifer Lawrence starring as the titular “mother”—really, that’s the only name she’s given in the movie—the film invites us to watch her lose her mind, as her house and her relationships come crashing down on her. If nothing else, it’s the type of film Moms have the most shareable reactions to once it finishes.

Where to Watch: Netflix

One of the more heartbreaking films on this list, Marriage Story follows Nicole (Scarlett Johansson) and Charlie Barber (Adam Driver) as they finalize the legality of their divorce. It’s saddening to watch the two try to share custody over their son (Azhy Robertson), while failing to completely give him what he needs, interspersed with sequences of the couple’s lawyers fighting each other on their behalf. Of course, there’s also that argument scene which you’ve probably seen meme’d to death. However, the film reaches some cathartic conclusions about marriage and truly loving another person that’ll surely leave you and Mom in a pool of tears.

An indie film that’s gone relatively under the radar, Never, Rarely, Sometimes, Always is centered on Autumn (Sidney Flanigan, in her debut role), a teenage girl who travels to New York City seeking medical help due to an accidental pregnancy. It’s a somber and definitely intimate picture that aims to depict how young women navigate society and the systems they’re forced to be a part of. It’s raw and unapologetic but also lingers on a lot of beautifully sad, quiet moments set in the “great,” big city. It’s an emotional gut-punch though, so make sure you and Mom are prepared with tissues.

Where to Watch: Netflix

On the flipside of teenage pregnancy depictions, we have Juno. You don’t need to be sold on Juno. People who haven’t even seen Juno immediately recognize that iconic orange-striped poster. It’s Elliot Page and Michael Cera perfectly playing the most unlikely of parents. This classic, raunchy comedy is typically not classified as a parent-child bonding experience, but how else are you and Mom going to start a conversation on unusual topics?

While not exactly a film about motherhood, Malignant shows us the horrors of misguided children dealing with the failures of their parents. From horror master James Wan (of The Conjuring and Insidious fame), Malignant is one of the best and wildest Western horror films to have come out in recent years. Let’s just say it starts off as what seems to be a haunted house story, but then quickly goes off the rails after that. Start the movie with you and Mom knowing as little about it as possible. She’ll find it crazy then you crazy for recommending it.