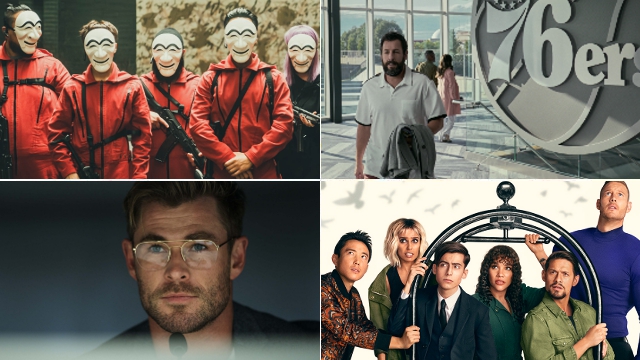 (SPOT.ph) June is nearly here and—don't quote us but—we definitely want to get up to no-good before the month closes. Luckily, Netflix has got us covered in that department with a new Money Heist crew, a shady high-tech prison run by Chris Hemsworth, a pro racer caught up in the world of drugs, and much more. Here's what's coming out on Netflix this June.

Put these 10 Netflix series and films on your watch-list for June 2022:

"Welcome to capitalism." In a world where North and South Korea have ended the war and established a joint economic area, of course it only makes sense to stage the world's largest money heist in this location boiling with political and social unrest. Combining two of the top countries for international dramas right now, Netflix' new Money Heist is a Korean adaptation of the hit Spanish series La casa de papel, so we're definitely going to be there day one.

Yeah, the NBA playoff finals are just around the corner, but we got our sights set on another piece of basketball entertainment coming out soon: Adam Sandler and Lebron James' Hustle. Starring Sandler as an NBA scout for the 76ers, Hustle follows Sandler's character as he tries to revive his career with his latest prospect, a gifted athlete from Spain, without his team's approval. We're looking forward to it, even if we're still recovering from Sandler's last film about misplaced bets on basketball, the riveting Uncut Gems.

The Umbrella Academy is finally back!—er, sort of. They're back but in the wrong timeline and are now facing off against their stranger and more deadly counterpart, the Sparrow Academy. The new season promises more superhero fighting, time travel shenanigans, and silly dance sequences from Netflix' favorite superpowered orphans.

Not Hustlers and not The Backup Plan, this is Halftime, an intimate look at the personal life of actress, dancer, model, and singer Jennifer Lopez. This American idol will be putting on her "I'm Real" face in this documentary that'll cover her rise to fame, personal life outside of the media circles, and moments of success and failure. You have our love, J. Lo.

If you enjoyed catching Top Gun: Maverick in cinemas, you should next check out Netflix' upcoming release Spiderhead, also directed by Joseph Kosinski and starring Miles Teller. The new film centers on Teller's character, an inmate at a prison wherein he's subjected to state-of-the-art, mind-altering drugs by a visionary warden portrayed by Chris Hemsworth. This unsettling sci-fi mystery definitely looks disturbing with its dialed up formality and Hemsworth's overly friendly smile.

Not going to lie, we're pretty excited for this series that pits Mr. Bean actor Rowan Atkinson against... a bee. We were sold on that casting alone, but the premise also sets this war at a rich person's mansion—which houses classic works of art and priceless cars—that Atkinson's character is only supposed to be house-sitting for a weekend. We can't wait for all the wacky hijinks and physical comedy.

Body-possession and body-swap stories always make for fun watches. In the upcoming K-drama Ghost Doctor, an arrogant yet highly gifted surgeon accidentally possesses the body of a first-year resident, making him the most sought-after doctor on the medical scene. Essentially, it's Ratatouille but set in a Korean hospital instead of a French kitchen.

From the studio behind JoJo's Bizarre Adventure, the upcoming series Spriggan is finally releasing this month after over a year of being teased by Netflix. The anime follows the titular Spriggans, an organization formed to keep ancient and powerful relics out of the hands of the world's powers, who seek to wield them for evil. The design of the series depicts a clash between ancient magic and modern technologies; all signs leading to an exciting, visual feast.

For you adrenaline junkies, the Spanish film Centauro combines the world of crime and drugs with the world of pro motorbike racing. The film looks to offer gunfights, high-speed chases, and a tragic protagonist just trying to look after his family. Honestly, can't ask for more from a crime thriller.

The events of the Rwandan genocide in 1994 have been of large interest to filmmakers and documentaries for years, and rightfully so. Netflix is bringing a new retelling of these harrowing events to our screens with Trees of Peace. Based on real events, the film is an account of what happened at Rwanda from the perspective of four women who hid in a basement for days on end as a massacre was carried out beyond their walls.