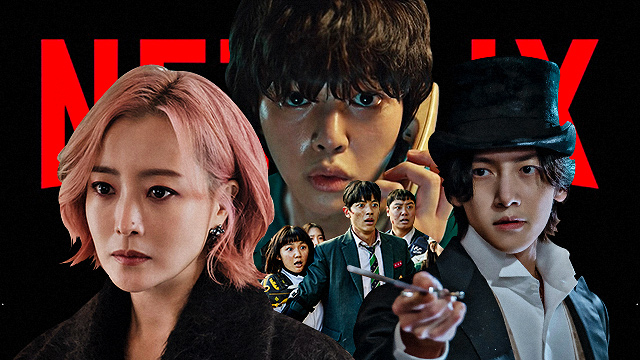 Webtoon Supremacy: K-Dramas on Netflix That Started Out as Digital Comics

From romance, fantasy, to thriller ones-we, or rather, Netflix, got you.

(SPOT.ph) Here’s a scenario: It’s three in the morning, the lights are all out sans the lone one emitting from your phone or laptop screen. You’re either silently—because you’re afraid a parent's going to come in and scold you for a) staying up late, or b) being loud, or c) you've moved out long ago but old habits die hard—giggling, crying, or fuming as you watch your favorite Korean drama on Netflix in the comforts of your bed. Yes, we see you. No, not literally. Everyone just can’t get enough of watching them.

Case in point: Almost half of the titles currently sitting pretty on the popular streaming platform’s Top 10 TV Shows in the Philippines list are, lo behold, from Korea. We know that you’ve probably added them to your own watchlist, if not already in the middle of watching it. Again, we don’t blame you. They are charismatic and (mostly) wholesome, with a compelling and unique way of telling stories that pushes their viewers to fall easily and quickly into the rabbit hole. They also don’t drag on for too much, mostly finished with one season.

Over the past year, there has been a surge of Korean dramas that were based on popular webtoons available to stream on—where else?—Netflix. So, if you’re looking for your next weekend binge watching plans (with the cold, rainy weather? We know you’ll be staying inside and burrowed in your covers).

Also read: 10 Underrated K-Dramas You Can Stream on Netflix

Here are some of the recent K-Dramas on Netflix that were based on webtoons:

A Business Proposal has 12 episodes at one hour each.

The Sound of Magic

The Sound of Music only has six episodes at one hour each.

If you loved Goblin, Tomorrow also has grim reapers (many of them… and they function as employees at a workplace)—but rather than escort souls into the Good or Bad place, they save people from becoming souls. SF9’s Rowoon, Kim Hee Sun, and Yoon Ji On make up the team of reapers who follow people on the verge of giving up and swoops in to help them find their will to live. This was based on a Naver webtoon of the same name by creator Rama in 2017.

Tomorrow has 16 episodes at more or less one hour each.

All of Us Are Dead

A normal day in school turned nightmarish for the students in Hyosan High School when one of them gets bitten by a failed science experiment. Trapped with no food, water or basic necessities amid flesh-eating zombies who were once their classmates, a group of students try to survive and find a way out of the place that has become ground zero. The webtoon it was based on is called Now At Our School, which ran from 2009 to 2011, by Joo Dong geun.

All of Us Are Dead has 12 episodes at more or less one hour each.

(Did you know that a Filipina appeared in this popular zombie flick?)

Sweet Home, which as a webtoon ran from 2017 to 2020 with 140 chapters by creator Kim Carnby and illustrator Hwang Youngchan, revolves around suicidal teen Cha Hyun Soo (Nevertheless’ Song Kang) and his neighbors as they try to survive and hold on to their humanity while trapped inside their apartment building where humans-turned-savage monsters roam around freely. Song is joined by Lee Do Hyun, Lee Si Young, Go Min Si, and Lee Jin Wook, among others, in the cast.

Sweet Home has 10 episodes at 45 minutes to one hour each.

Adventurer Savvy Seasoned Netflix K-drama A Business Proposal Tomorrow The Sound Of Magic All Of Us Are Dead Sweet Home
Explore Spot.ph