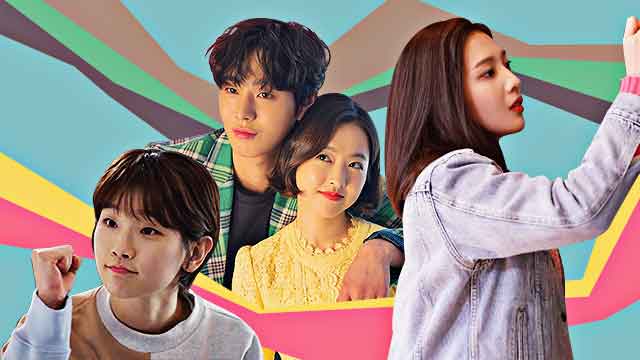 10 Underrated K-Dramas You Can Stream on Netflix

Looking for a hidden gem?

(SPOT.ph) Diehard K-Drama fan or not, there's no denying that you've watched a season (or two!) upon the recommendation of a friend or that suggested tab on Netflix. A quick scroll through your feed will also tell you what Korean series everyone's watching, and you might have taken a cue and added it to your list. While highly rated dramas are popular for a reason, there could be some you're missing out on. If you're in the market for more hidden gems, we rounded up 10 streamable Korean dramas that might not have appeared on your radar, but deserve a watch.

These must-watch underrated K-Dramas are streaming on Netflix:

Stranger follows emotionally detached prosecutor Hwang Shi Mok (Cho Seung Woo) as he investigates a serial murder case. He enlists the help of passionate detective Han Yeo Jin (Doona Bae) to reveal the truth about the case, and expose the corruption that led to it. If you're thinking actress Doona looks familiar, it's because you might have seen her in Netflix originals Kingdom and Sense8, and Bong Joon Ho's The Host.

This 2020 drama stars Kim Tae Hee as Cha Yu Ri, a ghost that has been hovering in between life and death ever since she died in an accident years ago. She is permitted to reincarnate, and gets 49 days to find her way back home to reunite with those she left behind. It seems easy enough, but she encounters a small hiccup—her husband Jo Kang Hwa (Lee Kyu Hyung) has remarried and now has a young daughter.

Longtime celebrity Yeo Woon Gwang (Park Sung Woong) is in need of a bodyguard and hires Kim Seol Woo (Park Hae Jin), a handsome and secretive man with several tricks up his sleeve. The drama's filled with bizarre twists and turns, and highlights the hilarious and lovable budding bromance between the star and bodyguard.

Cinderella and the Four Knights (2016)

Based on the 2011 novel of the same name, Cinderella and the Four Knights follows optimistic college student Eun Ha Won (Parasite's Park So Dam) who falls under the mercy of a cruel stepmother when her family dies. Her fate changes when an old man she helped makes her move into the Kang family mansion, where she must help the three Kang cousins (Jung Il Woo, Ahn Jae Hyun, and Lee Jung Shin) become worthy heirs to the family fortune. Bodyguard Lee Yoon Sung (Choi Min) rounds up the titular four knights and Ha Won finds herself stuck in a complicated love quadrangle.

Adept detective Moo Jin Hyuk (Jang Hyuk) is still recovering from the loss of his wife who was murdered while he was at work. Meanwhile, rookie cop Kang Kwon Joo (Lee Ha Na) uses her ability to tell voices and sounds apart to become a voice profiler following the death of her father. Years later, the two team up in order to find the perpetrator who took away their loved ones. The series was a hit in South Korea and even got a Japanese remake in 2019 which went by the title Voice 110 Emergency Control Room.

Wealthy heir Kwon Shi Hyun (Woo Do Hwan) feels he has nothing to lose when he makes a bet with his friends that he could seduce diligent college student Eun Tae Hee (Red Velvet's Joy), who no longer believes in love after her parents' marriage falls apart. Victory is apparent once Shi Hyun successfully tears down Tae Hee's walls, but finds himself losing as he begins to seriously fall for her.

Aspiring movie director Kang Dong Goo (Crash Landing on You's Kim Jung Hyun), budding actor Cheon Joon Ki (Lee Yi Kyung), and struggling writer Bong Doo Sik (Son Seung Won) had grand visions of success, but reality did not meet their expectations in this 2018 comedy. Aside from their failed dreams, Waikiki—the guest house that they run in Itaewon—is facing possible closure. Though ready to give up, the gang regroups when a single mother and her child show up at their door.

Ambitious prosecution lawyer Go Se Yeon (Park Bo Young) is quite the looker, while her childhood friend Cha Min (Ahn Hyo Syeop), who is a rich heir to a cosmetics empire, is just a face in the crowd. The two meet their untimely deaths in separate incidents, but see themselves reincarnated with the help of the Abyss, a mythical object that revives a person's soul into a different body. With their new bodies, the duo work together to find out who murdered Se Yeon.

Rivals Jung Geum Ja (Kim Hye Soo) and Yoon Hee Jae (Kingdom's Ju Ji Hoon) are ruthless lawyers who serve South Korea's elite and will do whatever it takes to make money, protect their reputation, and assert their supremacy. Determined to come out on top, the two duke it out in the court room and serve their own motivations.

A grim reaper named Black possesses the body of detective Moo Gang (Song Seung Heon) and works with Kang Ha Ram (Go Ara), a woman who can foresee how and when people die, in order to bring souls to rest. As he goes deeper into investigations to help souls, he must uncover the truth behind a series of murders, and guard his heart from falling for doctor Yoon So Wan (Lee El).

Kingdom Crash Landing On You Arthdal Chronicles Love Alarm My Holo Love Vagabond My First First Love Something In The Rain Stranger Man To Man Streaming Netflix Adventurer Savvy Seasoned Guide Evergreen Streaming Services
Your Guide to Thriving in This Strange New World
Staying
In? What to watch, what to eat, and where to shop from home
OR
Heading
Out? What you need to know to stay safe when heading out