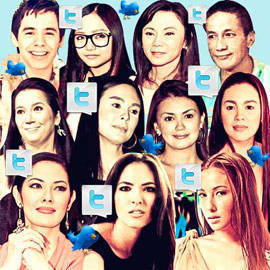 Top 30 Tweets of the Year

SPOT.ph culls this year’s most controversial, hilarious and twisted Tweets from the Twitterati. 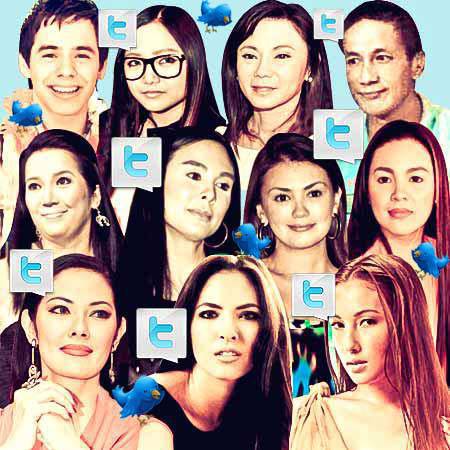 
29. KC Montero makes a Twitter bet with his ex-wife Geneva Cruz’s son, Heaven Arespacochaga:
Montero:
@HCAres if i can get this kid over 400 followers i win a bet. Help me beat a 14 year olds ass please. hahah
Arespacochaga: If my dad @KCMontero loses he has to shave his gray balls.
Montero: you lil shit! no dinner for you!
Arespacochaga : @KCMontero I’d skip dinner to see you shave your nuts

28. KC Montero on dressing in drag for his former radio show:
- For all who dont know, I will be in drag all week cuz I got Bieber to follow me. Ill keep my promise and it will be on ustream
Cassandra Monteriod a.k.a KC Montero in drag:
I want to have a love team. Maybe John Lloyd? Jossandra. Or Piolo? Piolandra? or Dingdong? Cassadong..
- A just got an endorsement for shampoo. The commercial will show me washing my wig in the shower. Im such a sexy bitch.

25. Gang Badoy, Rock Ed founder on the closing down of NU 107:
- Please let me win the lottery so I can buy a radio station to house Rock Ed Radio. And all the U92 people in the world. Thanks.
- Just walked back from NU to take a few last photos. 3 candles still burning outside. "Ang tanging pabaon ko ay pag-ibig." Thank u @nu107.

23. Maria Ressa, journalist, on life after ABS-CBN News and Current Affairs and being one of Esquire’s Sexiest Women Alive:
- what a surprise! ABSCBNNews.com: Ressa is Esquire’s Sexiest Woman Alive for Philippines http://t.co/EDcVAlK
- Thank you, Tweeps, for all your thoughts and well-wishes. I am happy and planning what’s next. Will let you know once I know! :-)

22. Senator Miriam Defensor-Santiago on falling down onstage in Turkey:
- Don’t lose your confidence if you slip Be grateful for a pleasant trip And pick yourself up, dust yourself off and start all over again...
- Video of me falling on Istanbul stage: http://www.youtube.com/v/dSUz6IzU_zg

21. Dr. Vicki Belo, celebrity cosmetic surgeon, on Charice’s Botox treatment:
- Just to clarify everyone: i did not do anything surgical with charice. Just a facial and thermage. No nose job. She’s fine the way she is :)

20. Charice, international singer and Sunshine Corazon of Glee:
- Sunshine Corazon’s Hello Kitty backpack. hahaha. http://twitpic.com/2qz7ed
Tweet exchange between American Idol finalist David Archuleta and singer Charice, who invited Archuleta to a gay bar in New York where she promoted her song "Pyramid":
Archuleta: Mental note to self: always ask where before you go! Wasn’t my kind of place lol, and I had no clue! I guess you live and learn. The..
- upside was that Charice was awesome, and she has an incredible voice. Hope that clears things up! Been seeing some of the tweets.. sheesh!
Charice: Before i go to my interviews, i just want to clear up some things, about the saturday night. David went to see me there perform as a friend
- One more thing, i just got invited there because Pyramid is no.7 on Billboard dance remix and i really had to go there to promote it.
- But bottomline, David just showed his support for me. and i wanna thank @DavidArchie for doing that.

19. Angel Locsin, actress and FHM Sexiest Woman of the World 2010, on her body shape:
- God made a very obvious choice when he made me voluptuous; why would I go against what he decided for me? My limbs work, so I’m not going to complain about the way my body is shaped

18. Veejay Floresca and Martin Bautista, designers and Venus Raj fans, on their viral Youtube video:
Veejay: I didn’t expect I can touch many people’s hearts by a simple funny video :) Thank u dear God for using me as instrument to bring joy! :)
Martin: Holy. I can’t believe we’re on Perezhilton already http://bit.ly/bLBpZy and you guys know how much I HATE HIM for bashing Xtina

17. Solenn Heussaff, model, VJ, and Survivor Philippines celebrity castaway:
- we said we will run naked if we’re in top 3 not top 4;) were crazy!

15. Maxene Magalona and Pauline Luna on the "Ampalaya Anonymous" issue
Magalona: Please bear with me. In my 8 yrs in showbiz, I’ve never been part of any intrigues until now. I love you all. :)
- Hi @marieluna! See you at the workshop on Monday, hope we could talk then. Dapat diba diretso tayo sa isa’t isa? Di ko nga alam pano napunta sa media lahat nito eh :) take care see you!
Luna: I just wanna clear that I never claimed that the girls were referring to me with their tweets until some of their friends confirmed it.
- Also, this isn’t publicity because in the first place, I’m not the breadwinner of the family and being in showbusiness is purely my choice.

14. Michelle Madrigal and Aubrey Miles, actresses and Survivor Philippines castaways, on their Twitwar:
Madrigal: Sooo easy to judge..mga wala naman kayong alam.oh well! things people say para lang may masabi.
Miles: i just watched micth’s interview.i have nothing to say to her,wat she did was a release from her pent up emotions.nothing personal,what for?
Click here to read more.

12. Drew Arellano, TV host, on the lady dentist who died in Shangri-la Plaza Mall:
-Holy SH*T. Some girl is lying on the flr inside shang mall. Seems like she jumped from somewhere. Not yet sure.

11. Bianca Gonzalez, TV host, on the Robin-Mariel wedding:
- now it can be said, congratulations and best wishes mr. and mrs. robin and mariel padilla! <3

10. Ruffa Gutierrez, TV host and beauty queen, on her issue with John Lloyd Cruz:
- I’m sick and tired of people asking me about John Lloyd Cruz! My gosh wala na bang iba dyan?!?! I’m trying to be polite pero nakakasuka na!!
- IM FABULOUSLY SINGLE BY CHOICE! Unattached, happy and stress-free! :) Wanna keep it that way. Enjoying life,travels, work n my girls.
- RT @TweetsNiAA: Ruffa G to John Lloyd Cruz: It’s not enough that you are cute and lovable. You have to have a backbone. FIERCE MO!
- A MAN 2 others may be BOYS 2 some. Sorry hindi kasi ako sanay. My exes were all warriors. May panindigan at lalaking lalaki in all aspects.
Ruffa on Venus Raj’s answer in the Miss Universe 2010 pageant:
- What would I answer if I was Venus? With my past mistakes i have sooo many 2 choose from. Mag-iisip muna ako in a MAJOR MAJOR way! LOL! :)
Read Tweets of the Week: Trending Topics Edition.

9. Kris Aquino, TV host and actress, on suspending her Twitter activities:
- I received this tweet several days ago- bakit hindi nyo minemention si james sa mga tweet nyo, only josh & baby james? I replied to it w/ honesty. My attention was called by Noy about this. So in the interest of keeping what is left of our privacy- I will suspend being active on twitter. It doesn’t make sense for me to leave SNN & Buzz & keep this avenue open for people to speculate & judge. Sometimes being quiet (obviously difficult for me) is the only prudent course when u r the sister of the country’s president elect. Thanks to all who followed my tweets.
Kris on independence after breakup with James Yap:
- Learning a lot from being on my own. I thrive when I have my independence but I need the responsibility of caring for my 2 sons to keep me grounded. I love new challenges & I can now just relax & release when I see that some things & some people aren’t for me. I’ve learned the hard way that life can be easy- it’s just a matter of our choices.
Kris on her supposed mall date with Makati Mayor Junjun Binay:
- I tweeted Monday about watching movie w/ Vice Ganda while the kids watched Cats&Dogs. I was told that in Pepscoop box may story that Mayor Jun2 Binay & me were malling together in Glorietta. Super not true- we just saw each other sa entrance near Tony Roma’s.
Kris on baby James’s "Villar" moment during the campaign period:
- Hay naku, ang ka naughty-han ni bimby! Talagang heaven’s way of making me feel all I did be4 to stress Mom. True, he said "veeyar" in Bacolod rally. Nag naughty sya kasi 10th event namin that day- pagod na. Bimby is sikat so nasa news.

8. Tim Yap and radio DJ KC Montero exchange Tweets about Justin Timberlake’s Manila concert this year:
Yap: Confirmed: Jessica Biel is flying in with Justin Timberlake tomorrow 5am,PAL flight.JT just left LAX& is on his way to Guam,on his way here
Montero: FYI, from what we know (we did book the tickets) at our station Justin is flying alone. Jessica did not make the plane.
Yap: Breaking news: JT and Jessica Biel apparently had a fight, and Jessica Biel bailed out of the flight to Manila. Wow we are outscooping TMZ-"
Montero: Clarification! We’re bringing Justin in. No fight between Justin and Jessica. We just forgot to book an extra ticket for her awesome butt.
Yap: As per Ruffa as per Angeli Pangilinan--JT is coming SOLO.No Jessica Biel.So good luck,girls!For JT stalkers,he’ll be @World Trade Center l8r

7. Tim Yap, TV host and writer, on giving false information about the recent lotto winner’s identity:
- Okay, ladies& gents excited about the winner of the lotto jackpot--I received reports that Miko Morelos is the Inquirer reporter who reported about the lotto. Not necessarily the winner. #sorrynacarriedawaylahat

5. @iamhubertwebb, fake Twitter account of Hubert Webb, recently acquitted in the Vizconde Massacre case after 15 years of incarceration:
- on way to Vira Mall to trade-in my beeper
- Wait, how do you put a CD into this iPod thing?
Read Tweets of the Week: Fake Hubert Webb Edition.

4. Jackie Chan, international movie star, on the Manila bus hostage incident:
- I come back to hk & I hear terrible news about what happened in filippines. A lot of things dont happen to your own country you don’t pay attention
Read Tweets of the Week: Trending Topics Edition.

1. Carlos Celdran, performance artist, Manila tour guide, and RH Bill advocate Tweets his grievances against the Church and calls on people to join his cause:
- is going to go to Manila Cathedral at 3pm to COUNTER the CBCP/Bible anti-RH group. Anyone want to join me? I’m seriously PISSED.
- says its just hitting me now. I can’t believe the cbcp has the capacity and THE DESIRE to see me jailed. Who is next?
Carlos on the "Pilipinas Kay Ganda" tourism slogan:
- does NOT like the new "Pilipinas Kay Ganda" DOT slogan for tourism. It would work for local Filipinos but um. foreign tourists will say "What the **** does that mean?" HELLO???!! Let’s all #HelpDOT come up with a better slogan before it’s too late. Seriously, Secretary Lim. WTH?
Read Tweets of the Week: Carlos Celdran Edition.