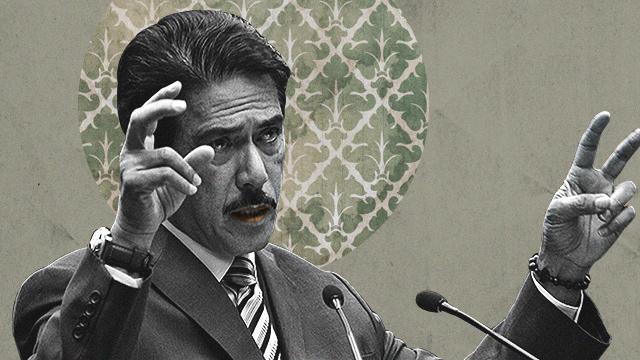 (SPOT.ph) Senator Vicente Sotto III, a.k.a. Tito Sotto, never disappoints. We mean, in a way, at least—he’s always exactly as you'd expect. The 71-year-old has had a very colorful career in showbiz, bowling (he was a seven-time national team member, says his resume), and (how could anybody forget?) politics. It’s been nearly three decades since Sotto was first elected as Senator in 1992 and we’ve been gifted with more quotable quotes than we wish we had, honestly speaking. So whether you’re completely over it or not—the man is still Senate President, so we hope you’re listening—we round up some more Sotto-isms.

It’s time for another round of Tito Sotto’s most intriguing statements:

"So this, to me, the SOGIE bill is a bill against women’s rights."

During the latest discussion on the SOGIE Equality Bill on September 4, Sotto dropped the biggest bomb of all. According to him, the bill is a "class legislation" that would benefit only a certain sector of society. He also added, "I hate to say this, but I have to. If you are a man, you will never be a woman no matter what you do."

"Did we apologize to [Hong Kong] when their citizens were massacred in Luneta?"

After the Chinese shipowner involved in the "little maritime acccident" that left a Filipino fishing boat and her crew sinking near Recto Bank finally apologized, Sotto also brought up the Manila hostage crisis that happened in 2010. A formal apology was issued by the City of Manila in 2013, and President Rodrigo Duterte also issued his own apology in 2018.

"Why the lengthy letters? Why not just 'homo sapiens?' We are all the same."

If you look at it from very, very, far away, Sotto isn't wrong—technically. This "homo sapiens" remark was said during a discussion on the SOGIE Equality Bill, and as Hontiveros—who authored the main proposed measure—replied, the labeling wouldn’t be necessary if "may equality among all regardless of identity and expression. Kaya lang po hindi ganoon ang nangyayari."

"I cannot think of an outright solution except to have a benevolent dictator."

After news broke that the government was losing around P700 billion of the national budget due to corruption, Sotto chimed in with this "solution." He added that every person with even a "whiff of corruption" to their name should be removed, ironically saying, "We can move for a moral regeneration of the entire bureaucracy."

"The fish could be coming from China."

This was a very interesting take from Sotto himself regarding the territorial dispute with China over our fishing waters. “There are exclusive types of fish that are only found in China but can be found here because of migration, perhaps," he said in an interview with ABS-CBN News Channel in June. True to form, the Twitterverse pretty much erupted with calls to give fish their own nationalities.

In the midst of the matrix conspiracy said to be a plan to oust President Rodrigo Duterte earlier this 2019, Sotto called out those tagged in the list for having been too affected, apparently. "Pinapatulan kasi. You should have dismissed it," he told CNN Philippines. This, after several of the list’s inclusions, such as Olympian Hidilyn Diaz, said that they fear for their security.

"'Mind your own business, scratch your own galis,' that’s what my kalaro says when I was young."

As proof of his diplomatic skills, Sotto told off U.S. Senator Marco Rubio for filing a resolution condemning human rights abuses in the Philippines using an old childhood taunt. Rubio, along with four other U.S. senators, called for the release of Senator Leila de Lima, a political prisoner of the current administration.

"[RA 9344] must be further amended to lower the minimum age of criminal liability in order to adapt to the changing times."

Sotto filed a bill in 2018 to amend Republic Act 9344, a.k.a. the Juvenile Justice and Welfare Act of 2006, lowering the age of criminal liability from 16 years old to 12 years old. Under this bill, a child who commits a crime, having “acted with discernment,” will be punished. We’re not sure what time zone Sotto is living in, but we’re not about to call this a step forward. BTW, Sotto has refiled the bill in the current 18th Congress.

This is the line Sotto proposed to replace the last line of the Philippine National Anthem: according to him, the current "ang mamatay nang dahil sa 'yo" sounds defeatist. In September 2018, at a time when the nation was going through several crises (the aftermath of Typhoon Ompong, a falling stock market, and an is-there-or-isn’t-there national rice shortage), this was what the senator was thinking about.

"For example, 'yong sinabi ko na binibiro lang, hinipuan na gano'n, will they be liable? You [pertaining to Senator Risa Hontiveros] said yes, the answer, I think, it's no."

Remember August 2018, when Sotto hit us with a classic? Except nobody was laughing? During a discussion on the Safe Spaces Bill (authored by Hontiveros and now a law), he questioned what and what doesn’t count as sexual harassment. Unsurprisingly, the lines are incredibly blurred for our senate president.