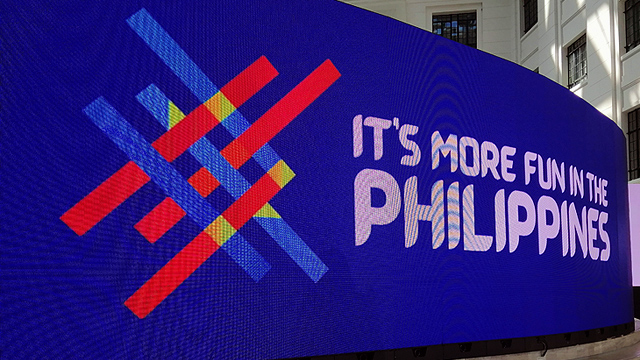 New Tourism Font Is a "Wonderful Homage," According to Filipino Designer

What do you think of "Barabara"?

(SPOT.ph) When the Department of Tourism, then under Sec. Wanda Teo, released its "When with Filipinos" campaign in September 2016, the public was quick to post their reactions. Tweets ranged from mistaking it as a "Cornetto ad" to something as political as "When you're with Filipinos, make sure he is not a police or your family is in danger." [sic] So when Bernadette Romulo-Puyat assumed office in 2018, everyone eagerly awaited her new advertising campaign for the tourism agency. Finally, on February 18, the Department of Tourism (DOT) rolled out its slogan: The tried-and-tested "It's More Fun in the Philippines" but with a fresh look—a new logo and a new font.

The campaign, which is primarily crowdsourced, encourages everyone to post their local travel photos on social media and tell the world why it's more fun in the Philippines. Of course, you should use the hashtag #ItsMoreFunInThePhilippines. Puyat explained that for every photo, the agency will donate U.S.$10 to the World Wide Fund for Nature.

You can also download the free font called Barabara, which is inspired by the typeface of hand-painted jeepney signboards, to go with your snapshot. Unlike the previous font used for "It’s More Fun in the Philippines," the new look has more curves around the edges and features an all-caps set. The fresh logo also dropped the Philippine map and stuck with a design that "weaves the unique colors of the Philippines together," Puyat pointed out.

AJ Dimarucot, Filipino graphic designer and director of the Communication Design Association of the Philippines, is a big fan of this "bold move to create a special typeface for a huge government endeavor such as a tourism campaign." In an interview with SPOT.ph, he described the creation of this custom-made font as a wonderful homage to everyday local artists like sign painters and letterers. The agency could have even gone as far as collaborating with those artisans from all over the country.

"I’m even more impressed with the fact that they have given this font away for free and allow a conversation through design, something I am passionate about. As with any form of rebranding exercise, there will always be a divide. As long as there is a dialogue and design is being talked about, then I’m all for it no matter what side you’re on," he continues.

Jowee Alviar, co-founder and creative director of TeamManila Lifestyle, has similar thoughts: "The font is very representational of what we see around the Philippines. The handwritten  letters is seen on signages, jeepneys, boats and ports in different forms and styles. As a graphic designer,  I always try to be inspired by my surroundings and the jeepney lettering has been one of them."

"It's More Fun in the Philippines" was created in 2012 under former Sec. Mon Jimenez through the help of advertising agency BBDO Guerrero—the same group that rehashed Puyat’s tourism campaign. The catchphrase was lauded for its flexibility, allowing anyone to use it in memes and on official DOT billboards.

Speaking before the press during the launch at the National Museum of Natural History, which incidentally was the former building of the Department of Tourism, Puyat explained why she revived the old slogan: "I actually believe in continuity. In other countries, they never change their campaign. In Malaysia, it’s been 'Malaysia Truly Asia.' In India, it’s been 'Incredible India.' I am the third Tourism secretary to use the hashtag. I believe it’s because it works. The Philippines has embraced the hashtag. We’ve made it our own. Why not continue what’s good?" But more than the revamped design, the campaign also highlights sustainable tourism which the agency started with the rehabilitation of Boracay, and now with other tourist destinations like Coron, El Nido, and Siargao.

What do you think of the new look? Let us know in the comments section!