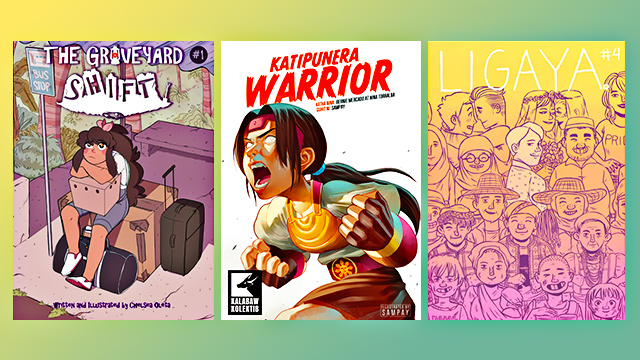 (SPOT.ph) Comics have gone a long way from punchlines in single strips to full-blown universes. And the Philippine comic scene hasn’t been left behind either. Don’t think there’s anything beyond the old-school dailies? Let these 10 wonderfully illustrated titles from Filipino creators change your mind. For this list, we round up a couple gripping stories told through gorgeous illustrations that we think would definitely be great for the small screen as well. Yup, there’s a whole lot more beyond Trese. Best part? You can check out the vivid worlds of all these comics and more for free on Penlab.Ink, the digital platform for komiks.

Champion of the Rose by Cat Aquino and Dominique Duran

With every page in full color, this comic would be peak every-frame-a-painting material if it were ever adapted for the screen. It is set in a fantastical version of colonial Philippines called the Empire of Sagrada. There, the King’s daughter has been put up by her father as a prize for a deadly tournament—except that she has her dreams of ruling alone. She then connives with a trans swordsman—who has his own reasons for joining—in a ploy to become her own champion.

In rich black-and-white illustrations, this still-continuing saga follows a child as she defends her home from enemies, with help from strange spirits. The young warrior is the sole survivor of strange events that ended her whole village. She is saved by others but shunned for her supposed cursed origins. Add the fact that this version of colonial Philippines is plagued by demonic ape monsters and you’ve got a rich world with lots to explore. The old-school inked-like art takes us back to the comics we used to read as kids—mixed with an updated digital edge.

Thicker Than Water by Dominique Duran

From the same illustrator that gave Champion of the Rose its rich setting comes a oneshot tale with great depth. Set in a Philippines that now lives underwater after the surface has been rendered unlivable, this quiet tale follows a young woman who exits her new home in search of her mother. There is no dialogue in this one, only an unexpectedly colorful and vibrant world that definitely has us hoping we could explore it more. We totally see this take on post-apocalyptic Philippines in a Midnight Gospel-esque series.

Read the oneshot on Penlab.Ink.

A murder mystery, folklore, and social commentary blend together in this literally graphic novel. The illustrations are done entirely in black and white—with a very fitting touch of red here and there. It follows a media crew as they cover a party held by an elite family on their hacienda. Shit hits the fan when the night reveals an army of the undead bent on revenge. The media crew find themselves at the center of it all, trying to figure out who the bad guys really are. Imagine if this became an animated series that still follows the unique OG art style.

The Graveyard Shift by Chelsea Oleta

Maya has moved to a small town in the U.S. where her mother now works as a nurse. Don’t be fooled by the average Fil-Am story though—Maya and her mom are both mangkukulam, a.k.a. they practice sorcery. And as it turns out, the small town they live in is exactly the strange type of place full of strange creatures that need their magic. We’re getting huge Gravity Falls vibes from this one—even the art style feels so alive it’s practically animated at times—but it is definitely it’s own unique Filipino take.

Memories of walking home from school with friends in the late afternoon sunlight—getting into all sorts of antics before actually heading to your house—are arguably the best ones most of us had growing up. In Dapit Hapon, 13-year-old Nemo is the perpetual second-placer in his school. One day, he finally gets the opportunity to walk home with his fave classmate RapRap, only it turns out Mimay, his completely unaware mortal enemy (she is the top student), is RapRap’s walking-home buddy. The once-bullied Nemo must now learn what it is to make, and even have, friends. Told in a simple but detailed black-and-white, this nostalgia-tinted tale will definitely take you back.

What if Jose Rizal’s Maria Clara suddenly finds herself transported to modern-day Metro Manila? And then promptly becomes a showbiz star? Yup, that’s the crazy interesting story at the center of this series. Aside from the cool plot, we also love the unusual color treatment! We didn’t know a green-haired Maria Clara made sense until now. Note that the pages itself are in shades of black and white but if an animated adaptation ever happens, those vivid colors are a definite must.

Colonial Manila takes on another grand form in this richly illustrated series by Tori Tadiar. Two orphaned siblings, a soldier in the Guardia and a feisty gunsmith, end up in the Palacio after saving the life of the new ambassador. In this rich world of Colonial Manila—with a futuristic edge—the two must deal not just with the new ambassador from the colonial powers, but also the mysterious courtesan he is paired with. Except it seems they are far more entangled in the city’s powers than they think. There’s fantasy, mystery, and gorgeous costumes. Someone make an animated series already.

Three college kids. One Metro Manila. This sometimes irreverent, sometimes serious take on life in Metro Manila—complete with detailed and somehow hilarious illustrations of the city—is a cool look into the gig scene. Oh, and did we mention Jose Rizal’s ghost pops up once in a while to add some fun commentary? Yup.

You know how sometimes comics and cartoons can take you to a quiet space in your mind? That’s the type of feeling you get from the Little Wolf, an official selection to the first Philippine International Comics Festival. In a wondrous forest—that would also make a great cartoon setting, just sayin’—lives a curious little wolf. Follow him as he goes around the world discovering the little things that make living what it is.

Adventurer Savvy Seasoned Penlab.ink Comics Trese Champion Of The Rose Sagala Katipunera Warrior Thicker Than Water Patay Kung Patay The Graveyard Shift Dapit Hapon Nagmamahal Maria Clara Ligaya Little Wolf Staying In Guide Greener Reads
Your Guide to Thriving in This Strange New World
Staying
In? What to watch, what to eat, and where to shop from home
OR
Heading
Out? What you need to know to stay safe when heading out