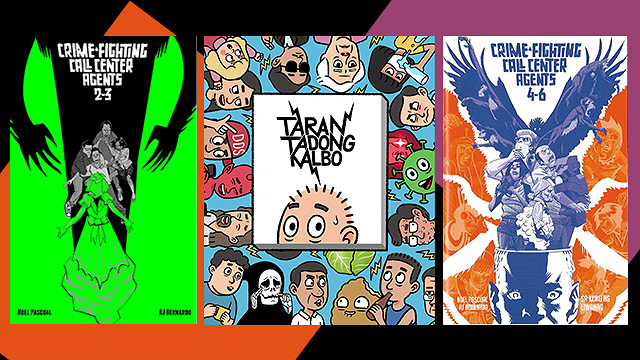 10 Best-Selling Comics You Need to Check Out From Komiket

With tales from mech-age Intramuros to sad-funny comic strips.

(SPOT.ph) When Komiket first launched in 2015, there was really no telling what would become of one of the first market platforms for the local comics industry. But co-founder Paolo Herras and team were sure of one thing: they wanted to grow the community, “to be an accessible and affordable entry point for new creators and new readers,” he says in an interview with SPOT.ph.

And grow they did. By 2016, they formalized as a non-government organization. “We needed to professionalize so that we stay as law-abiding citizens,” he shares with a laugh. They spent the next few years setting up Komiket runs across the nation, teaming up with local creators along the way, until February 2020, when they had their biggest convention yet attended by around 9,000 people at the SM Megamall Megatrade Hall. Herras explains that he was one of the people by the doors spraying alcohol on attendee’s hands; remember when everyone was still blissfully unaware of what 2020 would bring?

Their team opened the Secret HQ in 2019—a physical store that also functioned as their office—thanks to the continuing speedy growth of their community and the literal need to store around 20,000 copies of their annual comics anthology Kommunity.

With everything going on, Komiket has shifted to online selling—still with the same fervor to support local creators and be the bridge to readers. We asked Herras for the best-selling works on Secret HQ’s shelves that you need to read, and we ended up with a pretty impressive list! Aside from popular series, Herras slid in personal favorites and absolute must-reads from the comics community. Check it out below for the next addition to your own shelves.

Also read:
10 Popular Pinoy Comics You Need to Read on Penlab.Ink
10 Online Bookstores to Follow for Scoring Hard-to-Find Books
10 Filipino-Made Comic E-Books You Can Get Online

Dive into the world of Filipino comics with 10 best-sellers from Komiket:

For Herras, one of the more unique books on Komiket’s shelves is The Courageous Princess by Rod Espinosa. This series follows a princess who is as far from a damsel in distress as you can get. When Princess Mabelrose is captured by a dragon—and then told she isn’t valuable enough to be rescued by anyone—she makes her own way. The first volume was published in 1998 so you can expect a lot of nostalgia! And we’re not just talking art style, it is the type of novel that will remind you of those wholesome tales in your school’s library.

Who knew all of our anger could be encapsulated in a cartoon of a bald jackass? We know you’ve seen the cutting, so-sad-it’s-funny (or sometimes just really, really sad) strips of Kevin Eric Raymundo online. His works are known for reflecting all the tired and angry feels of current events—with a small peppering of very relatable bits and pieces from our childhood. Herras explained that Komiket was one of the bodies that helped make Tarantadong Kalbo Volume 1 come to life, so he’s particularly proud of this bestseller.

The magic surrounding Trese is still as real as it was when it was first published in 2005. Volume 1, Murder on Balete Drive was the best-selling Komiket book in March, said Herras, and it looks like the interest isn’t going to fade anytime soon! If you still haven’t gotten on board the hype train behind Alexandra Trese, supernatural detective extraordinaire, then best get on before the Netflix animated series adaptation drops in 2021.

The First Hundred Years of Philippine Komiks and Cartoons (P1,500) by John A. Lent

If you want to take a deep dive into how komiks evolved through the years, check out this book—the rarest and most expensive in Komiket’s collection, says Herras. It is a collection of everything from “Kenkoy to Zsa Zsa Zaturnnah” as well as several inserts explaining the history and context of the art form in the Philippines. Fun fact: As early as 1821, Ilocano painter Esteban Villanueva depicted the Basi Revolt of 1807 in a series of paintings—a possible origin of comics in the country, alluded U.S.-based professor John A. Lent in their book.

Tori Tadiar was a part of Komiket’s first Philippine International Comics Festival in 2020 for her work Twinkle, Twinkle. An acclaimed illustrator, her wonderfully drawn series Sagala was first published in 2017 and you can check out the whole colonial Manila-esque world in the best-selling edition on Komiket. It follows sibling duo Riel and Constantino, the first a feisty gunsmith’s apprentice who wants to become a courtesan and the second a humble Sargento, as they become entangled with the Corrido, the ambassador of the colonial powers, and his renowned escort Awit.

An ultra-colorful take on Philippine history, Dead Balagtas is a retelling of Philippine history, taking things all the way back to the creation myth of Tungkung Langit and Laon Sina in Tomo 1. It combines these age-old tales with today’s sensibilities through four poignant stories. With its unique take on visual storytelling, Dead Balagtas won a 2018 National Book Award for Best Graphic Literature and Book Design. This book is by "one of our most talented creators of this age," says Herras.

With just three copies left on their shelves—and no word of reprinting—you may want to hurry if you want a copy of this 2004 National Book Awardee. Siglo: Freedom is a collection of 10 stories spanning a century, from 1910 onwards. It contains works by master storytellers like Arnold Arre, Carlo Vergara, Lan Medina, Andrew Drilon, and more, with each one telling their version of the Filipino experience of freedom.

This graphic novel takes the big mech sci-fi tech genre and places it in an alternate Intramuros of the future. How are you not yet sold on this story? At the center of it all is Anya Valerio, a rookie of the Philippine Mech Force whose aim is to restore the honor of her father, a once-revered general—only not everything is as it seems with the war against aswangs outside their city. Gripping and action-packed, Tablay may be short, but it gets everything right.

Arnold Arre’s critically acclaimed graphic novel is another one of those works that may never leave the best-selling list—and deservedly so. First published in 2005, it follows a group of students who end up under the guidance of a mysterious Mrs. Enkanta, training to become warriors and capture mythic creatures loose in dystopian Metro Manila. It blends together Filipino folklore and our modern world perfectly. Not to mention the gorgeous illustrations of Arre! Komiket also carries the 2019 sequel, The Children of Bathala (P450).

All comics available for order online.

Adventurer Savvy Comics Komiket Secret Hq Paolo Herras Trese Staying In Reads
Your Guide to Thriving in This Strange New World
Staying
In? What to watch, what to eat, and where to shop from home
OR
Heading
Out? What you need to know to stay safe when heading out