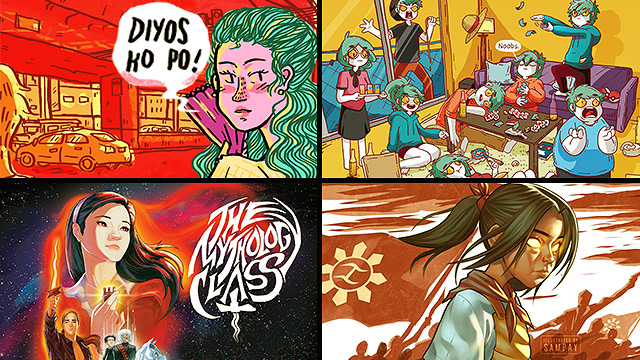 10 Popular Pinoy Comics You Need to Read on Penlab.Ink

From The Mythology Class to Trese.

(SPOT.ph) If stealing the Sunday comics section of the newspaper before your parents even had the chance to open it was a thing you used to do, then you’ll understand the magic of Penlab.Ink. This digital space hosts Pinoy creators and the comics that they make—everything from new series by up-and-coming artists to seasoned illustrators and writers sharing beloved graphic novels. Best part? They’re free to read.

Set up by creative content group Kalabaw Collective in October 2020, this platform plays host exclusively to Pinoy comics, referred to on the site as komiks. Sure, there has always been a strong komiks community, but Penlab.Ink serves as an “online presence” meant for when folks can’t physically gather to share and read their creations. The non-profit platform was “made by komikeros for komikeros”—which means it’s exactly where you can find all types, styles, and genres of komiks. Whether you’re fresh to the scene or a longtime community member, we round up a few must-read series—whether previews or full ones—currently on Penlab.Ink you need to check out.

Dive into strange new worlds through these 10 popular Pinoy comics on Penlab.Ink:

Yup, Alexandra Trese is on Penlab, too! You can preview the first few chapters of this popular dark fantasy series on the platform in case you’re yet to enter the underbelly of Metro Manila where Alexandra Trese operates as a hardened detective hounding down supernatural cases. The Trese series is currently being adapted into a Netflix anime so you can definitely get a sample of the OG material here.

Enter a luscious fantasy world based on colonial Manila in this series. In this comic, Manila is the capital of Hiraya, ruled by folks from the “Continental Empire.” Rein is the gunslinging younger sister of a Sargento Constantino; the two depend on each other as they were orphaned at a young age. When they are invited to the palace by the new ambassador sent from the colonial rulers, they find themselves tangled in a web of lies much more complicated than they could have ever dreamed.

Life in Orange by Lizmi

Forget living life with rose-tinted lenses. The soft orange hues of Life in Orange are far more inviting. One of the most popular BL series on Penlab, Life in Orange follows Vito, your typical and obedient schoolboy whose life is changed when he meets the strangely always upbeat Kahel. This series will take you through a Manila (and a childhood) that is probably similar to your own.

Old-school anime references? Check? Super corny but effective jokes? You got it. A ridiculous storyline? Definitely. This series follows self-proclaimed weeb Narutosasuke, who is bullied not only because he’s a weeb but also because his father, Janjalani, still runs a pirated DVD factory in the age of streaming (and torrents, but we didn’t say that). When their family factory is raided, Narutosasuke somehow gets reincarnated into a pirated DVD of an Isekai Anime. Yeah, we don’t get it either but we can’t deny this still on-going series has us hooked.

Take a peek at the works of National Artist Francisco V. Coching through the previews on Penlab. Widely regarded as one of the pillars of the local comics industry, Conching was born in 1919 and died in 1998—creating a trove of classic and influential comics in between, Pedro Penduko included! Ang Kaluluwa ni Dante is a 1949 graphic novel that follows Dante Magtanggol as he goes on a journey of vengeance with the help of Doctor Futiphar. And yes, it’s through a literal out-of-body experience.

The Mythology Class by Arnold Arre

If you haven’t checked out the works of Arnold Arre, then trust us when we say you’re missing out on one of the best contemporary komikeros out there. Check out the preview for The Mythology Class, first published in 1999, and go on an epic fantastical adventure based on Philippine folklore. Nicole Lacson is a student in the University of the Philippines with a deep knowledge of Philippine myths. When she ends up in a strange class with equally strange classes, they end up on a mission to save the human world from all kinds of mythic creatures threatening to ruin the balance between the two dimensions.

Sure, Maria Clara as the ideal Filipino woman is outdated, but her character as an historical and cultural influence can’t be denied—so what if she, as in the Noli Me Tangere character, ends up in 21st-century Manila? That wild situation is exactly what this popular series builds upon. And it looks like the Maria Clara we typecast into the subservient role is far from what we expect in this colorful version of Manila.

One of the most-read series on the platform is Katipunera Warrior, set in the richly stylized world of a colonial Philippines—but with demons abound. In this retelling, the Katipuneros are warriors with powers given by the gods to save the people from monsters. When a child with a mysterious past joins their ranks, she begins her journey towards becoming the legendary Katipunera Warrior. It’s dark, it’s gritty, and definitely gripping.

Illustrator Sampay’s own works are also up on the platform, and their series is all about a group of people you definitely wish existed (legally and fairly) IRL. The Super Proxies work when you, oh overworked and underpaid one, can no longer do so. Complete with manga-like artwork, this series follows an overly optimistic and driven group of friends as they take on all kinds of work—even as a proxy for someone’s date—with hilarity abound.

We all have our hunghang moments and this comic highlights all the best ones. Created by D. Borja, who just so happens to have a series especially for SPOT.ph (shameless plug alert), this hilarious collection of strips presents eight friends making their way about their yellow world. You can preview a couple of the funniest ultra-relatable strips on Penlab for a quick reminder that hey, you’re not the only one who gets hunghang sometimes.

Adventurer Savvy Seasoned Penlab Ink Budjette Tan Arnold Arre Drew Borja Trese Hunghang Flashbacks Reads Komiks Comics Staying In Listicle
Your Guide to Thriving in This Strange New World
Staying
In? What to watch, what to eat, and where to shop from home
OR
Heading
Out? What you need to know to stay safe when heading out