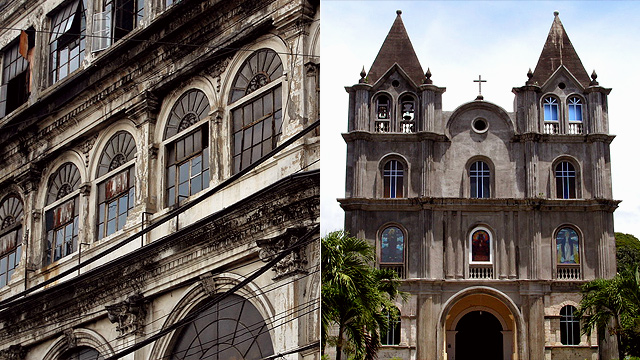 (SPOT.ph) Heritage sites will always deserve to be on everyone's bucket list. It's even better when they're declared cultural treasures by international agencies or local groups, because the recognition not only helps highlight these places' significance in our culture and history, but also helps in the preservation and protection of these awe-inspiring structures and natural wonders.

If you've already seen your fair share of local heritage sites, here's a new list of recently declared National Cultural Treasures and Important Cultural Properties by the National Museum of the Philippines. Whether you're visiting up north, traveling to Visayas and Mindanao, or even just looking for a fun weekend date,  these places are worth a stop.

During the Spanish colonization, the sitios of San Vicente de Balanac and San Guillermo de Dalangdang were annually plundered by pirates during seasons of calm seas. As a solution, the two sitios came together and moved inland, building a church. The Pindangan Ruins in Barangay Parian, San Fernando are actually remnants of this old church, built during the mid-18th century.

Santuario de San Pedro Bautista, one of the oldest churches in Manila, was founded on a hilly area in 1590, first as a chapel made from bamboo and nipa palm. It was later replaced with a wooden structure, then a stone structure with clay, and finally rebuilt with adobe in 1599. But the chapel was later destroyed at the hands of Chinese rebels in 1639, and further damaged when an earthquake hit the province in 1645. The present Santuario de San Pedro Bautista, including the preserved Baroque altar, was built in 1699. It also features a courtyard, gardens, a cave underneath the original site of the first chapel, and a life-size sculpture of St. Peter Baptist.

At five storeys, it’s almost hard to believe that this building in Escolta was once considered a skyscraper. One of the oldest structures in Manila, it was built in 1914 as a wedding present for Doña Margarita Zóbel y de Ayala and businessman Don Antonio Melián Pavía. Its Neoclassical architecture, which includes courtyards, balconies, and even an ornate griffin staircase, made it an impressive building during its time, and an example of pre-war architectural artistry.

It’s only fitting that National Artist for Architecture Pablo Antonio has a house that deserves cultural preservation. This heritage house, built in 1948, is located in Pasay and mixes mid-century modern style with plenty of lush greenery (including a pond). Part of the house now also serves as the atelier of designer Malu Veloso, Antonio's daughter. If his name sounds familiar, it's because this National Artist was also the architect behind Casa Juico—now Las Casas Quezon City.

With our country’s strong Catholic roots, it’s no surprise that many of our national cultural treasures are religious relics. Enshrined in San Roque Church in Cavite, the Nuestra Señora del Soledad de Porta Vaga or Our Lady of Porta Vaga is the patron of Cavite, and a venerated image by the Catholic Church. It has a rich history spanning centuries, including a theft (and eventual return) back in 1984. It was included as a national cultural treasure back in 2017 by the National Museum of Fine Arts.

The areas near Laguna de Bay have proven to be a wealth of archeological finds, being an important place of trade and culture during the Sung and Yuan dynasties in China. It was the center of the Porcelain Age in the Philippines, and multiple excavations have unearthed artifacts that are now displayed at Pila Museum. A quick visit to the museum shows ceramics from the pre-Spanish era, as well as items found from excavated burial sites.

This ancestral home built in the '30s was the first Art Deco home in Bacolod. Its architectural design by Salvador Cinco is reminiscent of a boat, which earned it the nickname "The Boat House" from locals. Aside from its architectural significance, it also survived both the Japanese and American occupation and was spared from destruction during the war, as a Japanese lieutenant and an American general both chose it as their seat of power. It was eventually relinquished back to its owners.

Built in 1872, this balay-nga-bato or bahay na bato was home to Doña Enrica Alunan Lizares and her husband, sugar baron Don Efigenio Lizares. Doña Enrica became a Kapitana, which earned her the nickname "Tana Dicang." The large house features 18 rooms, hardwood floors, and design that was common during the Spanish era, where horse-drawn carriages were parked on the ground floor and living quarters were on the second and third floors. The house has been impeccably preserved by Tana Dicang's descendants, and remains as an example of how homes were built and how well-off people lived back in the 19th century.

If you’re up for a trip to another historically noteworthy church, don’t miss Bohol’s Santo Niño Church. Also known as the Valencia Church, it was completed at the end of the 1800s. The church’s layout is in cruciform, and features steep roofs and stone architecture common in churches and cathedrals during that time. Its hardwood floors are made from balayong, tindalo, molave, and tugas—types of wood that are no longer commonly used today.

Guinsiliban, which came from the local term "ginsil-ipan" (to look out for pirates from a watchtower), is one of the oldest settlements in Camiguin. There's even a documented history of Ferdinand Magellan himself arriving on their shores. It is home to a triangle-shaped tower, which is unlike your usual Spanish-era circular forts, that gives sweeping views of the sea and even Mt. Balatukan and Sipaca Hill from a distance.