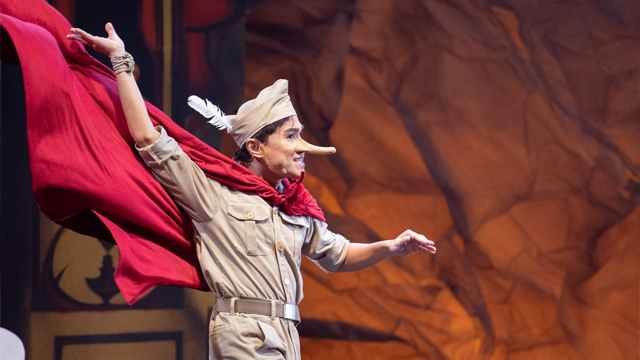 Filipino Musical Mula sa Buwan to Be Adapted Into a Movie

It will be directed by Treb Monteras of Respeto fame.

(SPOT.ph) While Hollywood has the likes of Grease, West Side Story, and Les Misérables among musicals that have been turned into movies, the Philippines has Changing Partners and Ang Larawan. It won't be long before we see another all-original Filipino movie musical on the big screen as Mula sa Buwan has just gotten funding through the recently concluded Film Development Council of the Philippines Project Market. The news was shared by Mula sa Buwan creator, writer, and stage director Pat Valera in a Facebook post on the evening of September 15.

The first Film Development Council of the Philippines (FDCP) Project Market ran from September 13 to 15 at Novotel Manila Araneta Center in Quezon City. It allowed filmmakers to pitch their projects to local and international industry professionals with the hopes of getting funding and collaborations to continue their works-in-progress.

While Mula sa Buwan didn’t get the FDCP seed money of P500,000, it secured post-production grants that are worth millions of pesos. This includes services by Central Digital Lab, Wildsound Studios (worth P1.2 million), and EDGE Manila Creatives Corporation (worth U.S. $1,000). "Not bad for our very first try,” Valera said in an online exchange with SPOT.ph.

The film adaptation will be directed by Alberto "Treb" Monteras II, writer and director of 2017 award-winning film Respeto. It will be produced by Valera alongside Monster Jimenez (producer of Respeto and Apocalypse Child) and Dev Angeo (board member of Quezon City-based microcinema Cinema Centenario).

"Other details for the film adaptation [are] not yet definite, but for sure, it’s a period movie-musical—still about love and defiance! I’m certain too that it will have the heart of the play, but now also with the fantastic visual splendor only film can create. So just imagine when we fly to moon? It’ll be magic," explains Valera.

Mula sa Buwan is based on Edmond Rostand's Cyrano de Bergerac and Francisco "Soc" Rodrigo's Filipino translation of the French classic. Valera’s version is set in 1940s Manila where Cyrano is an ROTC cadet and Roxane is a blushing colegiala. Christian, the lead's best friend, falls in love with the beautiful damsel and it’s up to Cyrano to make this connection happen.

It was originally titled Cyrano: Isang Sarsuwela in 2011, before it became a full production in December 2016. It was restaged in February 2017 and again in November 2018. Songs from the musical will be performed at a one-night concert on October 1 at 12 Monkeys Music Hall and Pub in Pasig City.