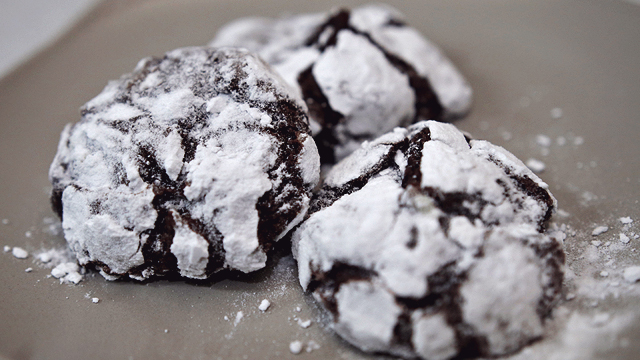 For those who want these chewy, chocolatey treats!

(SPOT.ph) You could call them miniature chocolate cakes or cookie-fied brownies, but as anyone who loves this snack-cum-dessert would agree, chocolate crinkles are in a league of their own. They’re usually made using a batter with cocoa or melted chocolate, rolled into balls and coated in powdered sugar, resulting in its telltale “cracks” (i.e., crinkles) as it flattens while it bakes. And sure, they’re a dime a dozen in these parts, but who makes them best?

For this list, we rated crinkles based on texture (our ideal cookie is dense, fudgy, and chewy), chocolate flavor (deep and dark is where it’s at), and level of sweetness (we expect them to be sweet, but not saccharine!). Other flavorings and additions are welcome, but our focus is on the cookie base itself.

The crinkles at Becky’s Kitchen are as close to homemade as you can get. They give you a balanced amount of darkness and sweetness, with a texture that’s slightly crisp on the outside and fairly chewy on the inside but still somewhat airy, thus keeping each bite light. The said lightness isn’t necessarily a bad thing; in our case, it allowed us to go back for more cookies without the umay kicking in. Thankfully, a box comes with a generous 24 pieces.

Mom & Tina’s crinkles come in a pack of three bite-sized cookies, each around one and a half inches in diameter generously covered in powdered sugar. Admittedly, they’re on the sweet side, but their crinkles stand out with the distinctive taste of cocoa and butter—a flavor combo you don’t usually find in crinkles, but reminds us of chocolate buttercream. Most of all, these crinkles stay wonderfully soft and fudgy, even after days at room temperature.

Medium in diameter and thickness (they’re about two and a half inches in width and around half an inch in height), Purple Oven’s crinkles are a dependable choice. They’re a tad on the airy yet dry side, but are still thick and chewy, offering a sweet, dusky chocolate flavor—likely from the use of Dutch-processed cocoa. Though you get a mild baking soda-y taste toward the end, these cookies are still better-than-average crowd-pleasers that satisfies our hankerings for chocolate.

Mo’ Cookies’ version wows with its size: it’s bigger than your palm, and about as fat as your thumb. Its cookie base is slightly crisp on the outside from the hardened powdered sugar, but fairly soft on the inside with a moderately dark flavor. This cookie is enriched with a generous addition of Nutella in the center—which works to its advantage in that it adds moisture and richness, but also makes the resulting bite rather sweet. You’ll want to keep water handy while you’re downing this one; still, if you’re on the hunt for a decidedly indulgent cookie (you can always opt to eat it in small doses), these crinkles are a pretty good choice.

Rather than full-sized cookies, Cru Kitchen’s Belgian crinkles come as fat, one-inch diameter minis that almost resemble balls, with a clumpy coating of powdered sugar from having absorbed the cookies’ moisture. Though not as moist as the others on the list—they’re dense and just chewy enough, but could be less well-done—they boast a bittersweet, yet smooth and robust chocolate flavor (seemingly employing Dutch-processed cocoa) that would make your inner adult pretty happy.

Asia’s Best Female Chef Margarita Fores’ take on the infamous ADB Crinkles is not completely identical to the original, but shines in its own right nevertheless. About two and a half-to-three inches in width and on the tall side as well, it features a not-too-sweet profile with what seems to be a heavy dose of vanilla. The vanilla can get in the way of the cocoa’s just-dark-enough depth—but the latter eventually makes its presence known, and you get a great, balanced tango of both flavors as you continue to chew. One caveat is that it’s cakey around the edges, but it does get chewier and more molten as you work your way to the middle.

Sold at Nono’s, Classic Confections’ crinkles are on the short side height-wise but are wide (around three inches) in diameter. They have a more or less even dusting of powdered sugar throughout with very little actual crinkles, but hey, it’s the inside that matters. Wonderfully molten and chewy within, these cookies give you a deep cocoa-heavy flavor that can feel salty, but are nonetheless dark and satisfying. We’d have ranked it higher, if not for the mild but present meaty aftertaste in our batch, as if it (or the ingredients that went into it) had been stored (and thus, absorbed other flavors) in the fridge.

3. Crinkles from the ADB Cafeteria (P16/piece)

The Asian Development Bank’s infamous crinkles can be hard to come by—you’ve gotta have an appointment to enter the building, and the security measures there are tight. But persist, and you can get your hands on one of the best of its kind in Manila. It’s medium-sized in diameter but on the fat side (we’re talking around three-fourths of an inch in height); and though it’s on the salty side, its cocoa-y flavor is just on the right side of bitter, seemingly enhanced with coffee. Taste-wise, it’s rather average; what really wins us over is its texture, coming molten at the center and dense and mega-chewy from edge to edge. At P16 a piece (note that there’s a maximum of 20 pieces per person per day), it far exceeds expectations. Now if only it weren’t so darn difficult to get ahold of for non-employees.

The Asian Development Bank is at 6 ADB Avenue, Mandaluyong City.

Like most other pastries at this proudly homegrown bakeshop, Hiraya Bakery’s crinkles aren’t just like any other of its kind. This version is imbued with mint, which blends well with its bittersweet body—these are some of the darkest-tasting crinkles on the list—and thankfully does not taste like toothpaste. We love that they’re not too sweet, in spite of the generous powdered sugar coating. They also score high on texture, coming on the especially dense side and are wonderfully chewy, with a moist, molten center that resembles that of a gooey brownie.

Wildflour is known for all their other excellent pastries, so we had high expectations for their crinkles—roughly three inches in diameter, half- to three-fourths of an inch in thickness—and they do not disappoint. This version ticks all the right boxes, with a chewy texture that gets even more molten and half-baked as you get to the center. Most notably, you get a far more well-rounded chocolate flavor here that has roasted and malty notes, and rounded out with just a hint of salt. Even if you weren't a crinkles fan, these would probably make a convert out of you.