VP Leni's Fave Best Pinoy Films: Four Sisters and A Wedding
Loading
Already a member? Log in
No account yet? Create Account
Spot.ph is your one-stop urban lifestyle guide to the best of Manila. 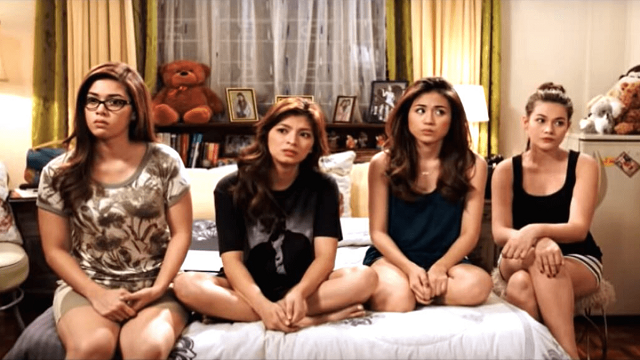 And admits to watching this and other Pinoy movies a couple of times!

Four Sisters and A Wedding

The 2013 drama centered around the Salazar family basically unravelling at the seams as a set of four sisters come home in time for the wedding of their bunso and only brother, Rebreb (Enchong Dee). It starred Toni Gonzaga as Teddie, Bea Alonzo as Bobbie, Angel Locsin as Alex, Shaina Magdayao as Gabbie, and Coney Reyes as their mom-with-the-favorites Grace.

The Cathy Garcia-Molina film became such a hit that even now anybody traipsing around social media is sure to come across GIFs and clips of some of the most pivotal moments and quotes. Think Teddie and Bobbie's heartbreaking confrontation with their mom (we know you've been either of the girls at some point in your lives) and of course, Locsin in character, dragging Mocha Uson—who plays the trash-talking girl Alex's ex-boyfriend goes with—out of a bar by the hair. A prequel was recently released in December 2020 with breakout star Charlie Dizon playing Teddie.

Plus, judging by the rest of the vice president's Netflix list, it looks like she's a big Bea Alonzo fan! In case you needed a recommendation or are looking for something to rewatch, take a look at the four other titles on her watch list below:

We can't get over how young LizQuen looks here! This 2013 movie—yup, Alonzo gave us both hits in one year—follows childhood besties Wacky (Dingdong Dantes) and Cat (Alonzo) as they go from friends to lovers. All thanks to another pair of younger besties, David (Enrique Gil) and Gillian (Liza Soberano).

The movie that started a #Hugot revolution; looks like the feels got even the Vice-President! It follows Mace (Angelica Panganiban) and Anthony (JM de Guzman) as two strangers who develop a bond during an impromptu trip to Sagada and elsewhere. Plus, for a bit of meta, Mace first gets Anthony's attention as she cries in a plane while watching Robredo's next pick, which is...

Bringing it back to the OG John Lloyd Cruz and Bea Alonzo movie, One More Chance arguably changed everything for Pinoy romance dramas. Don't lie: The many ups-and-downs of college sweethearts Popoy (John Lloyd Cruz) and Basha (Alonzo) still get to you—and we totally relate to Mace crying her heart out during that "Tayo na lang ulit" scene.

And for a bit of laughs and feels, revisit one of Ki Chiu and Xian Lim's most popular films! Rich boy Rocco Espiritu (Xian Lim) hires out-of-luck aspiring actress Rocky Dela Cruz (Kim Chiu) to play his wife in a bid to secure inheritance—which of course becomes more complicated as their ruse becomes all too real.

Adventurer Savvy Leni Robredo She's The One Bea Alonze That Thing Called Tadhana Bride For Rent One More Chance Four Sisters And A Wedding Charlie Dizon
Your Guide to Thriving in This Strange New World
Staying
In? What to watch, what to eat, and where to shop from home
OR
Heading
Out? What you need to know to stay safe when heading out