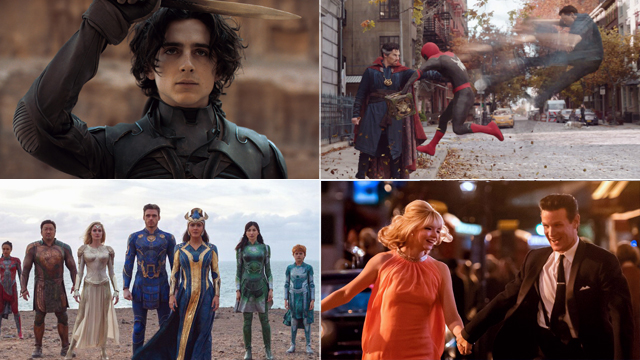 Are you ready to go back to watching movies in the theaters?

(SPOT.ph) Cinephiles, rejoice! With Metro Manila down to Alert Level 3, cinemas can now reopen and welcome moviegoers—with limitations and proper protocols followed, of course. Some cinemas in the Metro have already announced their opening dates in November, but there’s no telling when other theaters will follow suit. If this were a fantasy world and we could safely enjoy a movie experience without any consequences, there’s a bunch of cool blockbusters we’d love to see on the silver screen.

Here’s a roundup of the biggest movies of 2021 we wish we could watch in cinemas:

In the land of Kumandra, the peaceful life of humans and dragons gets disrupted when the evil Druun spirits start turning everyone into stone. Thanks to dragons’ sacrificing themselves, humanity survives. When the Druun return to wreak havoc 500 years later, it’s up to warrior princess Raya (Kelly Marie Tran) to stop them. She must find the last dragon, Sisu (Awkwafina), to save Kumandra.

What we’re most excited for: Southeast Asia, represent! Raya and the Last Dragon makes history as Disney’s first film about Southeast Asian culture, so we’re curious to see how it all plays out on the big screen. One thing’s for sure: Now, we can say there’s a Southeast Asian Disney Princess.

Who else felt robbed when they didn’t get to see Natasha Romanoff (Scarlett Johansson) on the big screen this July? A much-anticipated part of the Marvel Cinematic Universe, Black Widow revolves around Romanoff’s life in the aftermath of Captain America: Civil War (2016), giving audiences a look into her dark origin story while introducing important characters. When a new villain attacks Romanoff while she’s hiding from the U.S. government, she gets a blast from the past she didn’t ask for. As she’s forced to reunite with her “family”—that is, the Russian agents she once posed as family with—she must also confront her shadows.

What we’re most excited for: The anticipation of finally getting to see a standalone Black Widow film is enough to kill us, to be honest. We can’t wait to meet Yelena Belova (played by Little Women’s Florence Pugh), a fellow Black Widow who used to pose as Romanoff’s sister, and watch the two ladies kick ass together.

In this fun sci-fi comedy film, Guy (Ryan Reynolds) is just a bank teller living his everyday life, blissfully unaware that he’s actually an NPC (non-player character) in a video game called Free City. Sure, he gets shot at and held hostage every day, but that’s normal, right? When he decides to stray from his usual routine one day, he accidentally wears a player’s glasses and starts seeing the video game world like a player would. Guy begins a quest to become the hero of his life with player Molotovgirl (Jodie Comer) by his side.

What we’re most excited about: The movie’s hilarious premise is enough to get us hooked. Ever since Deadpool, we’ve learned to trust Ryan Reynolds in comedic roles, so we’re not going to question anything. We’re just here to have fun.

Here’s another Marvel Cinematic Universe (MCU) film on our to-watch list. Originally released in the U.S. in September, it tells the story of Shang-Chi (Simu Liu), a martial artist with a troubled past, just trying to make his way in the world. He leads an ordinary life as a valet with his best friend, Katy (Awkwafina), but his past eventually catches up to him. When crime organization Ten Rings attacks him, Shang-Chi finds himself reconnecting with his sister and confronting his past.

What we’re most excited for: Shang-Chi and The Legend of the Ten Rings breaks boundaries just by existing. We’re finally seeing an Asian superhero headlining a Marvel film! The film also features a largely Asian cast. Aside from Liu and Awkwafina, some other big names in the cast are Tony Leung as Shang-Chi’s father, Wenwu, and Michelle Yeoh as Ying Nan, his aunt.

Years after the events of Spectre, James Bond (Daniel Craig) has retired to Jamaica, but his peaceful life gets disrupted when a CIA agent contacts him for a mission. Bond also meets Nomi (Lashana Lynch), the next 007. While the two of them butt heads, they embark on an action-packed journey together to find a missing scientist and stop a bioweapon from being unleashed.

What we’re most excited for: It’s Daniel Craig’s last time to play James Bond, so we’re expecting him to pull out all the stops. The film also has an interesting set of new characters: terrorist leader Lyutsifer Safin (played by Academy Award-winning Rami Malek) and the first ever female 007, Nomi (Lynch was also in Captain Marvel).

Based on Frank Herbert’s iconic novel of the same name, this sci-fi fantasy is a feast for the eyes (and, no, we’re not just talking about Timothée Chalamet and Jason Momoa). In it, young Paul Atreides (Chalamet) and his family head to Arrakis, a desert planet that controls “spice”—a valuable drug that can increase humans’ lifespan and aid in interplanetary navigation. But Arrakis’ native race, the Fremen, are at war with invaders, and they’re caught right in the middle of it. Paul and his family must figure out who to trust, and fast, if they want to survive. And just who is the girl that keeps appearing in Paul’s visions? This movie is the first of two parts.

What we’re most excited for: The visual effects and action sequences are bound to be breathtaking in Dune. We can’t wait to see Arrakis come to life—especially the giant sandworms.

This Wes Anderson film revolves around The French Dispatch, a fictional newspaper about to have its farewell issue. The film dramatizes three articles from the paper, which include an article about Moses Rosenthaler (Benicio del Toro), a mentally ill artist; a student protest; and the kidnapping of the Commissaire’s (Mathieu Amalric) son.

What we’re most excited for: This film debuted at the Cannes Film Festival. It’s in anthology format, making it different from the other movies on our list. We’re intrigued to see how the impressive cast work together, among them names like Bill Murray, Tilda Swinton, Adrien Brody, Edward Norton, Willem Defoe, and Timothée Chalamet.

Eternals is the latest addition to the Marvel Cinematic Universe, which comes to U.S. theaters this November. Set in the aftermath of Avengers: Endgame, immortal aliens who’ve lived on Earth for thousands of years have to step up to the plate when a race of evil humanoids, the Deviants, threaten to end humanity. The Eternals’ superpowers range from super speed and super strength to mind manipulation and making illusions. Can they help mankind survive before it’s too late?

What we’re most excited for: The film has a diverse cast that features both fresh and familiar faces. We personally look forward to seeing Crazy Rich Asians breakout star Gemma Chan, who also played Minn-Erva in Captain Marvel, as protagonist Sersi, an Eternal who manipulates non-living matter. Meanwhile, Train to Busan’s Ma Dong Seok (aka Don Lee) plays Gilgamesh, the Eternals’ strongman who fights with his fists.

From Edgar Wright, director of Baby Driver, comes a psychological horror film that will keep you awake at night. In it, aspiring fashion designer Ellie (Thomasin McKenzie) has just moved to London to start college, but reality isn’t as wonderful as she’d hoped it would be. One night, she goes to sleep and dreams she’s in her favorite era, the ‘60s. The catch? She’s in the body of someone else, charismatic club singer Sandie (Anya Taylor-Joy). Ellie enjoys her nightly sojourns as Sandie, but she soon realizes that things aren’t all sunshine and roses in Sandie’s life, after all.

What we’re most excited for: We’ll watch anything with Anya Taylor-Joy in it, and we’re curious to see her in a role markedly different from Beth Harmon in The Queen’s Gambit.

The third Spider-Man MCU film is set to be released this December in the U.S., and we’re hoping we’ll get to see it in local cinemas too. After the events of Spider-Man: Far From Home (2019), everyone knows Peter Parker (Tom Holland) is Spider-Man, which makes his life take a turn for the worse. Desperate to turn things back to the way they were, he enlists Dr. Strange’s (Benedict Cumberbatch) help to magic his way back to having a secret identity. Only, things don’t go exactly as planned and villains from across the multiverse start making their appearance.

What we’re most excited for: We’re ready for some multiverse action! The first official trailer confirms the return of a bunch of villains from other Spidey films, including Doctor Octopus (Alfred Molina) from Spider-Man 2. Will the other versions of Spidey (Tobey Maguire and Andrew Garfield) make an appearance too?

Raya And The Last Dragon Black Widow Free Guy Shang-chi And The Legend Of The Ten Rings No Time To Die Dune The French Dispatch Eternals Last Night In Soho Spider-man: No Way Home Adventurer Savvy Seasoned City Life Heading Out Guide Greener
Your Guide to Thriving in This Strange New World
Staying
In? What to watch, what to eat, and where to shop from home
OR
Heading
Out? What you need to know to stay safe when heading out