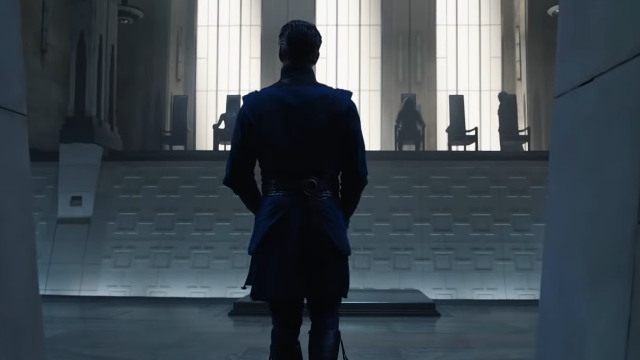 Comics 101: Who is That Character From the Doctor Strange Post-Credits Scene?

Breaking down all the multiverse characters from Doctor Strange.

(SPOT.ph) Still trying to wrap your head around the shocking twists of Doctor Strange in the Multiverse of Madness? Or maybe, as usual, you find yourself wondering who the hell was in that Marvel post-credit scene. Don’t worry, this isn’t the forbidden section. We’re here to bust open the Book of Vishanti and breakdown all the multiversal characters of the Doctor Strange sequel. Beware of spoilers ahead.

Also read:
MOVIE REVIEW: Doctor Strange in the Multiverse of Madness Is a Twisted Venture Into Multiversal Mayhem
Sam Raimi Tells Us About How the Stars and Last-Minute Scripts Changed Up the Multiverse-Opening Dr. Strange Film

Here’s what the Multiverse of Madness post-credit scene means for the future of Doctor Strange:

Charlize Theron is Clea in the MCU

The scene following the film’s end credits features Doctor Strange (Benedict Cumberbatch) walking down the street, when he’s suddenly confronted by Charlize Theron in a purple sorceress outfit that’s giving Narissa from Enchanted vibes. She informs Strange that his multiverse hopping has caused an incursion, and that they’d need to fix it together by heading to the Dark Dimension, where Doctor Strange came to bargain with Dormammu in the first film.

Theron is portraying Clea, a powerful sorceress and one of Doctor Strange’s classic supporting characters in the comics, alongside Wong (Benedict Wong). She eventually even becomes Strange’s wife for a period in the comics, so we may see that romance develop between her and Cumberbatch, now that his universe’s Christine Palmer (Rachel McAdams) is off the market. Clea is notably the niece of Dormammu in the comics, which means the return to the Dark Dimension in the third film is highly likely.

Who are the Illuminati in Doctor Strange in the Multiverse of Madness?

Next to Clea, the members of Earth-838’s Illuminati are sure to leave the audience wondering—who exactly these characters are and where they can watch them next? While we already know Baron Karl Mordo (Chiwetel Ejiofor) from the first film, let’s meet the characters in order of their introduction.

Captain Carter (Haley Atwell) is the answer to the question, “What if Peggy Carter took the Super Soldier Serum instead of Steve Rogers (Chris Evans)?” Quite literally. A variant of Captain Carter was first introduced in the premiere of Marvel’s What If? series on Disney+. While the Philippines has yet to have access to the streaming service, there’s no need to worry, since that version of the character is slightly different from the one we see in this film. Interestingly, the Captain Carter on What If? also joins a superhero team consisting of a less heroic Doctor Strange, so at least there are some constants in the Multiverse.

Black Bolt, King of the Inhumans

Next up is Black Bolt, a.k.a. Blackagar Boltagon (we aren’t joking), who’s the silent but deadly member of the Illuminati. For the film, Marvel brought back actor Anson Mount, who portrayed a version of the character in the quickly canceled television series Inhumans, which may or not be canon to the MCU…? Even Marvel Studios isn’t sure. Either way, the Inhumans are a race of humans in the Marvel universe who have a specific gene that allows them to obtain superpowers when exposed to Terrigen mist. Think the X-Men, but they have to inhale some green smoke to get their powers. In the comics, Black Bolt is the King of the Inhumans who live on the Earth’s moon and is a staple member of the Illuminati in the comics.

A familiar face on the team, this Illuminati’s Captain Marvel is Maria Rambeau (Lashana Lynch) instead of Carol Danvers (Brie Larson). In the 2019 Captain Marvel film, Captain Rambeau is Carol's fellow pilot and best friend. Since there’s no precedent for this happening previously in the MCU, we can only assume this universe’s Maria is the pilot who absorbed the Tesseract energy and got abducted by the Kree instead of Danvers. This development is possibly a spin on Maria’s daughter Monica becoming Captain Marvel herself in the comics.

In the most Reddit fan-casting case to ever happen in Hollywood, John Krasinski appears as Mr. Fantastic, a.k.a. Reed Richards, in the film. Dr. Palmer mentions that the Baxter Foundation funds the operation—a reference to the Baxter Building, the Fantastic Four’s headquarters in the comics—so he most likely plays the Tony Stark-esque role of the team. Richards also mentions to Wanda that he has kids and a wife, which is undoubtedly a reference to Susan Storm (the Invisible Woman) and their kids Franklin and Valeria Richards. Place your bets now on if Krasinski’s IRL wife Emily Blunt gets cast as Invisible Woman for the upcoming Fantastic Four film.

To me, my X-Men! Sir Patrick Stewart returns as Professor X, only just not the same Professor X as we think. This is not the Professor X from the mainline X-Men film series, neither is it the one from 2017’s Logan. Judging by the yellow hover chair and the theme that plays during his entrance, this Professor X is more akin to the one from the 1992 X-Men animated series. Charles doesn’t mention the X-Men or mutants in this film, but we’ll next see them explored in Marvel’s revival of the ‘90s series entitled X-Men ’97 on Disney+.

Doctor Strange in the Multiverse of Madness is now playing in cinemas.