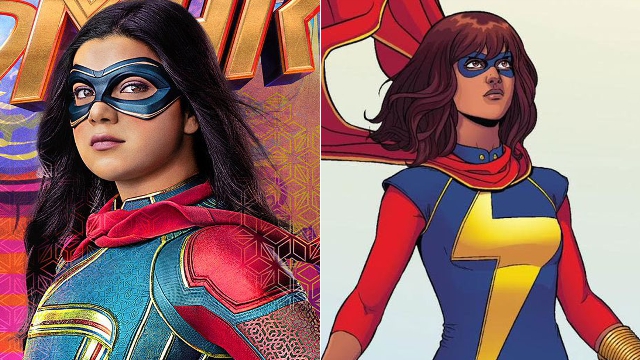 Comics 101: Who Is Ms. Marvel and What Will She Bring to the MCU?

Here's a breakdown to help you flex on your nerd friends.

(SPOT.ph) The full picture may not be quite evident for us Filipino fans of Marvel—due to the lack of the Disney+ streaming service in our area—but the Marvel Cinematic Universe has been full steam ahead on its expansion to the different forms of media, from their film franchise to streaming series, and inevitably, to holiday specials and short films too.

In the past three months alone, the studio was able to drop a six-episode series on one of their lesser-known heroes, Moon Knight, and the box-office-shattering sequel Doctor Strange in the Multiverse of Madness. In the next two months? The studio’s looking to drop its first four-quel in Thor: Love and Thunder, 10 episodes of a half-hour comedy in She-Hulk, and the coming-of-age origin story of Ms. Marvel.

Thor, Doctor Strange, and She-Hulk are already quite familiar entities within our pop culture, but Ms. Marvel—especially this iteration of the character—is definitely less so. While we’re not privy to her upcoming Disney+ series dropping this week, let’s breakdown the history of the character so we can see what we’re missing out on and what Ms. Marvel will bring to the Marvel Cinematic Universe (MCU).

Who is Ms. Marvel?

The Ms. Marvel that the MCU is introducing is Kamala Khan. To understand who Kamala Khan is and how she got the title of Ms. Marvel, we’ll need to back up a few decades.

In the 1977, Marvel Comics introduced Ms. Marvel, the superhero identity of one Carol Danvers. Yup, that Carol Danvers, the character Brie Larson plays in the movies. Larson’s character gets her Kree powers essentially the same way as the comics’ Danvers does, only that the films’ Danvers takes up the identity of “Captain Marvel” immediately, while the comics’ Danvers instead goes by “Ms. Marvel” for the better part of four decades.

At the time of her introduction, Danvers played a major supporting character to the original Captain Marvel, a guy named… Mar-Vell. Just roll with it; comics are weird. Originally a dude in the comics, this character ended up being played in the MCU by Annette Benning, for reasons.

Mar-Vell was Captain Marvel in the comics from 1968 to his mostly permanent death in 1982. Afterward, a bunch of other people tried taking up the title of Captain Marvel for a time, but they're mostly all relatively unimportant characters (to this story) whose names end in "-Vell," so we can skip them.

Fast-forwarding all the way to 2012, we get Danvers’ long-overdue inheriting of the Captain Marvel title. This was somewhat around the time in Marvel Comics when they were pushing diversity among their “main superheroes” line-up, which notably then included Jane Foster becoming Thor, Sam Wilson (a.k.a. the Falcon) becoming Captain America, and Amadeus Cho becoming the Hulk.

With the Ms. Marvel title now vacant and a dedicated push for more diverse voices in comics, Marvel soon announced, in late 2013, a new Ms. Marvel series that’d introduce Kamala Khan in the title role. Khan is a Muslim Pakistani-American teenager who lives in New Jersey. Alongside the likes of Miles Morales’ Ultimate Spider-Man, Khan’s Ms. Marvel is one of the more recent characters who rapidly rose in popularity within the comic book community. More than just due to diversity though, young readers unsurprisingly loved the accurate representations of the multi-cultural world.

In the comics, Ms. Marvel is an Inhuman—basically, a normal person who unlocks powers when they inhale green mist (We’re skipping past this. Again, comics are weird.)—with the powers of shapeshifting. Think: Mister Fantastic’s elastic powers. The creators of Ms. Marvel went with this powerset to emphasize the weird growth stage a teenager, especially a person-of-color in the U.S., experiences.

It was also done to avoid a glamorous, flashy power, such as the energy projectiles of Danvers’ Captain Marvel, who Khan worships and wants to emulate, which she later realizes that she can’t due to their different powersets and cultural backgrounds.

Ms. Marvel became an instant hit and her cultural presence within the comic book community was instantly felt. Her popularity led her to become one of the more well-known members of teams such as the young Avengers-type team known as the Champions, alongside Morales’ Spider-Man, and the Asian-American group known as the Protectors, alongside Shang-Chi. She even eventually joined the Avengers, which will no doubt happen on-screen too, when in all likelihood her popularity with comic readers translates over to the general audience.

Where Will Ms. Marvel Appear Next?

Ms. Marvel is set to debut in her own Disney+ series on June 8th, with Iman Vellani in the titular role. She’s the youngest Marvel character (in terms of publication) to receive their own MCU title, and for good reason. The series will depict her origin story, except that she won’t be an Inhuman with shapeshifting powers anymore. Based off the trailer, the MCU will have her be able to construct cosmic energy out of her mind via a bangle, a traditionally Indian clothing ornament. Think: Green Lantern’s imagination powers.

While thematically not as evocative of the central themes depicted in the Ms. Marvel comic series, the change so far looks to be the only major departure from the comics, as the trailers still show Khan being a Carol Danvers fan-girl and her (perhaps naïve) aspirations to be exactly like Captain Marvel.

Khan will also get to meet Larson’s Danvers on the big screen in the Captain Marvel sequel film that’s set to drop next year. The film is curiously titled The Marvels, no doubt in part due to there being Captain Marvel and Ms. Marvel now. However, Teyonah Parris’ character Monica Rambeau, the daughter of Danvers’ best friend introduced in the first film, is also set to appear in The Marvels, now with the superpowers she acquired in the Disney+ series WandaVision.

Given that Rambeau also becomes a superhero in the comics—who also goes by Captain Marvel, by the way… comics are weird, et cetera, et cetera—it wouldn’t be that much of a shock if the title The Marvels refers to her as well. Who knows, we may even see the many other characters who’ve taken up “Marvel” in their superhero names appear. Gotta’ keep that brand recognition strong!

However, whatever the case, Kamala Khan as Ms. Marvel is no doubt going to make a lasting impression on the MCU going forward. If her series is a success, expect a louder demand for the company to make more of an effort to present a world that reflects “the world outside your window,” as the late Marvel Comics legend Stan Lee used to say. It’s what the kids need these days.

Ms. Marvel drops on Disney+ on June 8. Disney+ has no current launch date in the Philippines.