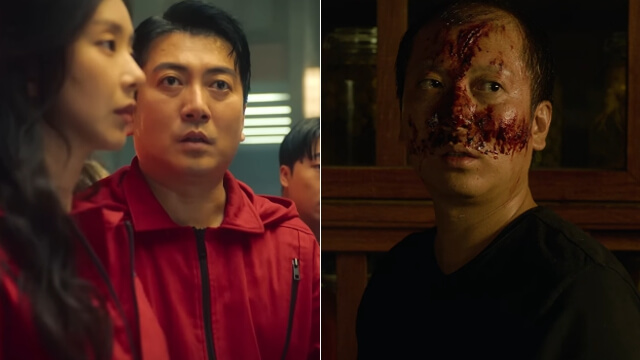 Did You Know? Money Heist: Korea’s Arturo Character Is the Basement Dweller From Parasite

Here's where you probably know the other actors from.

(SPOT.ph) A new Money Heist crew debuted on Netflix over the weekend! In case you've been living under a rock, the South Korean remake of the Spanish series La casa de papel introduces us to an even bigger heist taking place in a fictional Joint Economic Area between North and South Korea. With an abundance of K-content on streaming and music platforms, you've undoubtedly met some of the new faces under those Hahoe masks.

Feel like getting hit over the head with a scholar's rock? We've got a knowledge drop for you. Money Heist: Korea's adaptation of the infamous Arturo character,  Cho Young Min, is played by Park Myung Hoon, whom you undoubtedly remember as the basement dweller, Oh Geun Sae, one of the antagonists of Bong Joon-ho's Parasite. So yes, this means that although he's playing objectively the Worst Hostage Ever, we must still put some "RESPECT!" on his name.

Also read: The Cast of Money Heist Korea Tells Us How the Adaptation Takes Things a Step Beyond the OG

Here's where you may know the Money Heist Korea cast from:

If that bit of trivia still wasn't as surprising as a birthday party stabbing for you, don't worry. We have a few more recognizable faces we want to list off.

Yoo Ji Tae delivers a compelling performance as this iteration of the heist's elusive mastermind known as "the Professor," a role fitting for the actor given that he previously portrayed the main antagonist in Park Chan Wook's Oldboy. Yup, that incest man and architect of revenge himself is now the guy we're rooting for to win in this new series. We're not making this up, or else we'd have to cut our tongue out.

Next up, we got the point man of the operation, the love-to-hate-him Berlin, played by Park Hae Soo. This one is a bit easier to identify for Netflix fans, as you'll merely have to imagine the actor in a green jumpsuit instead of red, as he's none other than Player 218 (Cho Sang Woo) from "the best show on the planet," Squid Game. Here's hoping the heist lands him that 45.6 billion won he's been after.

Finally, we have Jeon Jong Seo as our new Tokyo. You may recognize the actress from a couple South Korean thrillers that turned into global hits. She starred in Burning alongside Steven Yeun, and The Call on Netflix alongside Park Shin Hye. Both thrillers are intense, but in varying ways, and would serve as fitting follow-ups once you're done with your Money Heist binge.