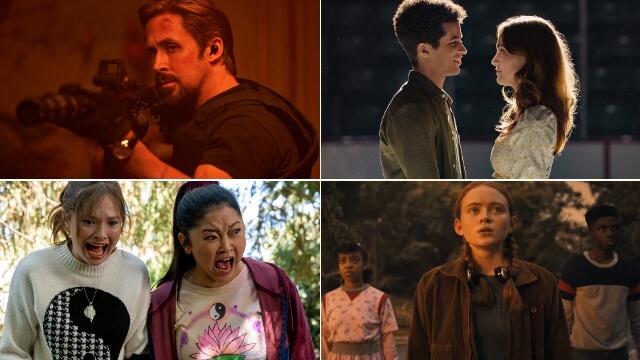 (SPOT.ph) We're officially about to cross over the halfway mark of 2022. Have you reached the goals you set for yourself at the start of this year, or have you been hard at work getting by against—*gestures vaguely at our surroundings*—all this? Either which way, we've made it this far, so let us give ourselves some room to relax this month by streaming some entertaining and feel-good content.

We've rounded up a few of the titles coming out on Netflix this month that'll help you do just that.

Also read: 10 Adventure Movies to Stream If You Need to Escape All Your Real-World Problems

Put these 10 Netflix series and films on your watch-list for July 2022:

Kicking off the month is the jumbo-sized, two-episode finale to Stranger Things 4. The final two episodes will have a lot of time to unpack that cliffhanger the first volume left us with, as they have the combined running time of about four hours. We'll surely be running up that hill to catch the next Stranger Things volume as soon as it drops.

While their toy counterparts may have faced off already in Toy Story 3, Chris Evans and Ryan Gosling—and their glorious facial hair—will be facing off in the flesh in Netflix' action-thriller The Gray Man. Directed by the Russo Brothers (of Captain America and Avengers fame), the film will center on a global game of cat and mouse between the two super spies, played by Evans and Gosling. Our money is on Gosling coming out the winner, but we look forward to being proven wrong.

Hello, Goodbye, and Everything in Between (Film)

We've heard of pacts made between friends to get married before they reach a certain age, but a pact between a couple to break up before they head off to college? Absurd, yet that's the plan for Aidan (Jordan Fisher) and Clare (Talia Ryder) in Hello, Goodbye, and Everything in Between. The film centers on their last, super-date before they go through on their plans to breakup, but something tells us it'll be easier said than done.

For the zombie fix of the month, we're definitely going to check out what this new Resident Evil adaptation has in store. Not related to last year's Resident Evil: Welcome to Raccoon City, this series is a wholly new adaptation of the popular video game franchise, and oh look, it stars John Wick's Lance Reddick! Plus, it looks akin to Zack Snyder's Dawn of the Dead and Army of the Dead, so it should be eight episodes full of aggressive violence and gore.

Who says horror has to all be shocking and action-packed? Boo, Bitch is a ghost story starring Lana Condor as a high school teen who dies whilst trying to cross stuff off her pre-graduation bucket list. YOLO, am I right? It looks to be a horror comedy along the lines of Hocus Pocus and What We Do in the Shadows, but of course, through the very specific Netflix perspective of what high schoolers look and talk like.

Netflix is quite underrated in the animation department. Their kids movies usually find a way to give unique spins on traditional stories, and The Sea Beast looks no different, with its tale of pirates hunting mythical creatures. It's also been a while since we've gotten a swashbucklin' pirate adventure at this scale, so the fact we're getting an animated one from the director of Big Hero 6 and Moana has us pumped.

Detective Conan fans have definitely been eating this past month, with the release of Detective Conan: The Bride of Halloween in cinemas and, now, the upcoming release of a spin-off series Detective Conan: Zero’s Tea Time on Netflix. Even if you're a simple anime fan, you'll appreciate this undercover agent story of "Toru Amuro," who works as in the security police, as a detective, and in a black-ops organization... all under different identites! Which one is the real identity? Will need to reflect on that further.

Another gasp at life for the found footage horror genre, the Taiwanese film Incantation is a fictional documentary that is inspired by a real-life story of a woman seemingly being cursed after breaking a religious taboo. Will there be jump scares galore? We're sure of it. Will we be sleeping with the lights on after watching? You bet.

Lastly, we have the feature film adaptation of Jane Austen's Persuasion. We've already seen how good these Jane Austen adaptations can get with Pride and Prejudice and Emma (and Clueless, too), so we'll be hotly anticipating this period piece. 50 Shades of Grey and The Ellen Show star Dakota Johnson is also playing the lead here, so here's hoping we get some spicy and steamy romance a la Bridgerton.