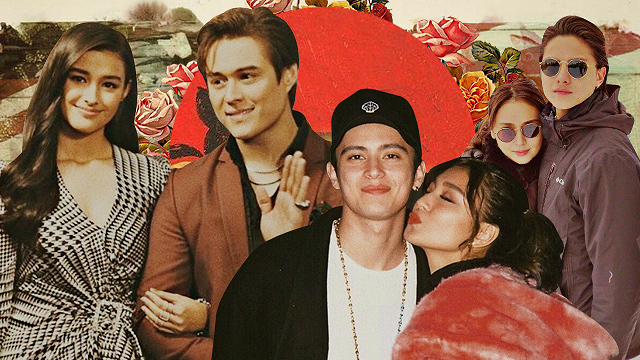 (SPOT.ph) It’s hard to keep a relationship a secret when you’re always under the spotlight. But there are those rare celebrities who managed to surprise everyone with a relationship bombshell aftering keeping things on the down-low. Here are 10 celebrity pairs that made you go, "I knew it!"

As if it’s not already hard enough to confirm your relationship with a fellow actor, it’s even more difficult if you have die-hard fans shipping you with your love-team partner. It doesn’t help if you’re from competing networks, either. Maine Mendoza (a.k.a. Yaya Dub) and Arjo Atayde were first spotted at a restaurant in Makati in October 2018 and they’ve been sparking dating rumors ever since. They were even seen wearing matching costumes for Halloween. While they’ve generally been low-profile about their relationship, Atayde finally confirmed that he’s exclusively dating Mendoza in January and finally made it Instagram-official with a date photo in February—and in the U.S., no less.

It’s one thing to keep a relationship a secret for a few months—but love-team partners Kathryn Bernardo and Daniel Padilla (who make up KathNiel) kept theirs private for five years. Padilla confirmed the news during the media launch of their 2018 blockbuster, The Hows of Us, in August. You could probably already tell they were dating with how they affectionately call each other “Bal,” so while fans were happy over the confirmation, they weren't exactly surprised. (You can’t fake that onscreen chemistry!) Fans might just be hearing those wedding bells soon because the two are reportedly already talking about marriage.

In July 2017, Liza Soberano and Enrique Gil told Yes! Magazine that they were “in a relationship with no labels.” In 2018, five years after they were first paired in 2013’s Must Be...Love, LizQuen confirmed that they were “exclusively dating.” It was only in February 2019, while promoting their new film Alone/Together, that the two officially confirmed on Gandang Gabi Vice that they were already in a two-year relationship.

While others may have been more low-key about confirming their relationship status, Nadine Lustre and James Reid pulled no punches during their JaDine in Love concert in 2016. (Well, in hindsight, the surprise was already in the name of the concert.) Reid already told Lustre that he loved her over dinner a few days before their concert. But that didn’t stop him from saying, “I love you,” to her in front of their screaming fans who have been on #TeamReal since day one.

Indie film director Samantha Lee (Baka Bukas, Billie and Emma) and host-model-blogger Mari Jasmine picked the perfect way to confirm their relationship—with a sweet photo taken at the Pride March held in June 30, 2018. Many were surprised to hear about the relationship, since some people initially knew of Mari Jasmine as Sam Milby’s ex-girlfriend. But Mari Jasmine seems happier than ever. In an interview with Pep, Lee talks about their relationship, saying, “Yeah, we’re going strong…we’re happy.”

Megan Young and Mikael Daez have been open about their travels abroad way before they officially admitted that they were in a relationship. It was only in February 2017 that Daez confirmed that they’ve been in a six-year relationship. They kept it a secret when they were first starting out because Daez was in a love team with Andrea Torres and Young was still vying for the Miss World crown (which she won, btw). But it looks like their sacrifice was worth it, because now they look stronger than ever.

There have been many names linked to Sarah Geronimo—including Gerald Anderson (who reportedly pursued her for a while) and Rayver Cruz (who was her boyfriend for a year). But she’s been generally quiet about all of them, which is why fans were ecstatic when she confirmed her relationship with Matteo Guidicelli in 2014. Fun fact: Before they admitted their relationship, Guidicelli accidentally sent a text message calling her “Mahal” to the late Wenn Deramas, who posted the screenshot on Facebook.

Actress Andi Eigenmann might have stepped away from the spotlight, but that doesn’t mean her fans aren’t updated with her love life. After speculations about her relationship with champion surfer Philmar Alipayo, Eigenmann finally confirmed their relationship in November 2018 in an interview. In February 2019, she announced that they’re expecting a baby together.

News of Billy Crawford’s break-up with long-term girlfriend Nikki Gil in 2013 was still fresh when rumors started swirling about him dating Coleen Garcia. Gil revealed in an interview with Cosmopolitan Philippines in December 2013 that a third party was to blame for their break-up, though she didn’t specify who it was. Crawford and Garcia only confirmed their relationship during an episode of It’s Showtime! in July 2014. And while they’re now happily married, Garcia revealed on Tonight With Boy Abunda that it took her 11 months to say “I love you” back.

All eyes were still on Luis Manzano after news broke about his breakup with on-again-off-again girlfriend Angel Locsin in January 2016. That’s probably why he kept his relationship with Jessy Mendiola a secret for months after officially getting together. In July 2016, Mendiola got caught off-guard when she was asked about Manzano confirming their relationship, but laughed it off and eventually revealed that he started courting her in May 2016.