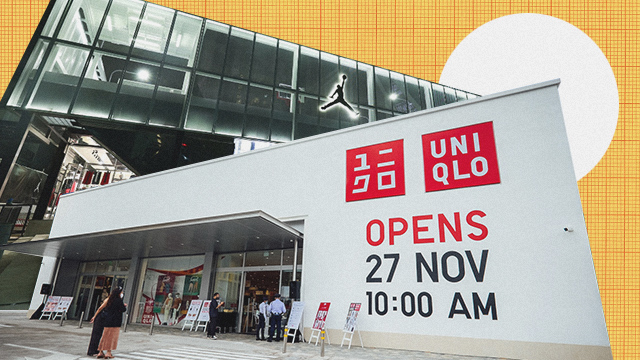 All the Store Openings That Got Us Excited in 2020

Despite the pandemic, the shopping scene in Manila had some cool new additions.

(SPOT.ph) Despite the changes in our shopping habits brought about by the roller-coaster ride that was 2020, the year still saw some great additions to the local retail scene with some pretty notable stores opening throughout—yup, even during quarantine. From international brands opening their first-ever stores in the country to homegrown labels setting up shop and giving the Manila shopping scene more character and variety, these fresh new spots prove that brick-and-mortar is far from being extinct. Below, we round up all the store openings that got us excited in 2020.

Also read:
10 Store Openings That Got Us Excited in 2019
Online Groceries, Face Masks + More: Your Ultimate Guide to Shopping in Manila During Quarantine
10 Ways Traditional Shopping Will Change After the Pandemic

These are the Stores Opening in 2020 we raved about the most:

Believe it or not, it was just this year that Australian skin and bodycare brand Aesop opened its first store in Manila at Greenbelt 5 in Makati City—we know, it feels like a lifetime ago. Even months after the store’s big reveal, the tranquil space is still a sight to behold with interiors decked out in expansive curves and corners and products lined up against neutral tones and spacious interiors, almost like a modern museum.

The news of a Jordan Store opening in Manila first began circulating in late October, with sports fans all over the country buzzing with excitement. The gargantuan sportswear store officially opened on December 3 and it holds the largest assortment of Jordan apparel in all of Southeast Asia. Plus, it’s decked out end-to-end in artwork by local artists Veejay Villafranca, Jaime Pacena, Raxenne Maniquiz, and AJ Dimarucot; the store also has memorabilia that commemorate the beloved sport. It even has a basketball court on the roof, which features a Kimou Meyer mural inspired by a one-on-one game.

The Makati City gem that is It’s Vintage first opened its doors in late January. The brainchild of Filipino designer Fed Pua (the creative force behind local streetwear brand Factory), the vintage clothing shop previously held pop-ups around the Metro, but its Esteban Street outpost, nestled on the second floor of the unassuming Planters Products Building, is its first permanent, standalone store. It’s a treasure trove of old-school finds from the stockpile of vintage clothes sourced from all around the world, to the rustic 1960s Americana interiors to the vinyl records blasting all day long. Don’t forget to check out the one-of-a-kind rainbow dressing room when you drop by!

Yes, the long wait is finally over: You can now shop Glossier in Metro Manila at Look, the jaw-dropping beauty hub in SM Aura Premier that’s stocked corner to corner with makeup and skincare essentials. Look, which opened in late October, also houses other popular brands you’d be hard-pressed to find in the Metro including Kylie Cosmetics, Fenty Beauty, Huda Beauty, Summer Fridays, and more.

Tommy Hilfiger, known for their stylish apparel and accessories, opened their first ever watch-centric store in the entire world at SM North EDSA in January. Though Tommy Hilfiger has several boutiques throughout Manila and around the globe, this outpost marks the first time the brand opened a shop that houses only their chic timepieces. The store has a clean, minimalist aesthetic, but is still decked out in Tommy Hilfiger’s signature red, white, and blue color scheme. Everyone from casual watch owners to obsessive collectors will love browsing the boutique's selection of effortlessly chic analog watches.

Large pink board-ups teasing the opening of Swedish fashion brand Monki in Manila were up in SM Megamall as early as March. Sister brand to the ever-popular H&M, Monki finally opened its first store in the Philippines on September 18 at Mega Fashion Hall—it also happens to be their very first store in Southeast Asia. A week later, a second Monki branch opened at SM Mall of Asia. More than just a place to shop for chic new fashion pieces, Monki is also popular for providing shoppers a glamorous shopping experience—their stores are usually decked out in colorful interiors, extravagant decor, shiny mirrors, and more.

Homegrown store Frankie & Friends opened its third store in the Metro in early November at Molito Lifestyle Center, Alabang. The shop’s first two branches are located in SM Aura Premier and Power Plant Mall, but their latest outpost is perfect for South kids out there looking to shop local a little closer to your home turf. Frankie & Friends describes themselves as "an intentional marketplace for a conscious and holistic lifestyle" and their wide array of locally and sustainably made goodies includes clothing, accessories, food, home decor, beauty and personal care products, plants, and more.

Though their sporty tracksuits were big in the '80s, streetwear brand Champion made a huge comeback in 2017 and their retro-preppy aesthetic has been a favorite among fans of athleisure, vintage fashion, and Americana sportswear since. Champion opened their first standalone store in Manila in October and according to the folks behind the brand, they’ll be setting up shop in more malls soon—we’ll keep our eyes peeled!

Japanese retail giant Uniqlo opened its first so-called "roadside store" at Westgate Alabang in 2019—a standalone building dedicated top to bottom to Uniqlo’s world-famous form-meets-function fashion finds. While the Uniqlo Westgate outpost was the first of its kind in the country, the brand followed it up with a second standalone roadside store, which opened in late November. Both branches offer customers easy access to the store with locations connected to main roads and entrances that require no mall passage—they even have their own parking areas!

Jordan Store Manila Uniqlo Roadside Store Uniqlo Jordan Frankie And Friends Aesop Manila It's Vintage Look Glossier Tommy Hilfiger Monki Champion Shopping Heading Out Store Opening 2020 Store Openings Savvy Adventurer Seasoned Makati Bonifacio Global City Alabang Pasay Mandaluyong
Your Guide to Thriving in This Strange New World
Staying
In? What to watch, what to eat, and where to shop from home
OR
Heading
Out? What you need to know to stay safe when heading out