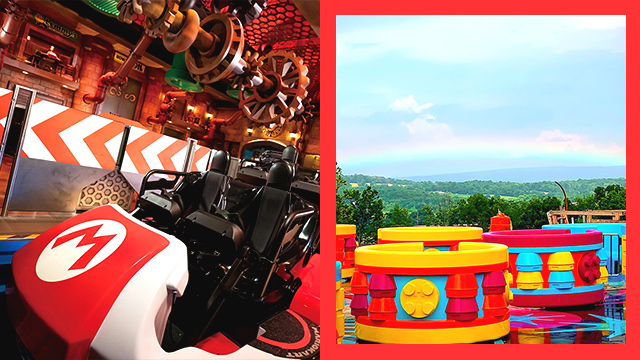 10 Exciting Theme Parks That Are Opening in 2021 and Beyond

We can't wait to check out these awesome attractions.

(SPOT.ph) Whether you're a Disney follower or a Hello Kitty fan, there's always a special theme park somewhere in the world for you. (Huge plus if it's just somewhere in Asia like Hong Kong or Singapore!) With 2020 about to end and fingers crossed a better year coming in, a lot of long-delayed theme parks are finally opening in the next few years.

Check out these exciting theme parks that are opening in 2021 and beyond:

Super Nintendo World’s flagship ride, of course, is a rollercoaster reminiscent of Mario Kart called Koopa's Challenge. Augmented-reality technology lets you be fully immersed in the ride while wearing a virtual headset shaped like Mario's red cap. Live out the popular racing game as you zoom your way through the Mushroom Kingdom and try to win against Mario and Luigi. Just like in the game, you also get to power up through mushrooms and collect coins hidden inside boxes marked with a question mark.

Warner Bros. in August confirmed that a Harry Potter theme park is coming to Japan in the "first half of 2023." The plan is reportedly to make it a lot like the Warner Bros. Studios Tour London's The Making of Harry Potter, where you can explore the world of Harry Potter and see how the movie franchise was created by getting to check out costumes and recreated sets, walking up and down Diagon Alley, or handling your own magic wand.

The much-awaited outdoor attraction—the first of its kind for Studio Ghibli—is located on a 200-hectare plot of land within the Expo 2005 Aichi Commemorative Park in Nagakute City. It is be divided into five zones, which are all based on the studio's amazing repertoire of animated films. There's the Hill of Youth, which takes after the 2004 movie Howl's Moving Castle; Ghibli’s Large Warehouse, which is an indoor space for exhibitions, small-film viewing, shops, and restaurants; Mononoke’s Village, which features a replica of Tatara Ba or Iron Town; Valley of Witches, which draws inspiration from the magical world of Kiki's Delivery Service; and Dondoko Forest, which recreates a rural landscape reminiscent of My Neighbor Totoro's setting.

Said to be the largest of the eight global LEGOLAND Parks, LEGOLAND New York is finally set to open in 2021 following delays in its intended launch in July 2020 (because of you-know-what). It boasts 50 rides and attractions spread out across its 500-acre property, a 250-room hotel, and the first-of-its-kind LEGO Factory Adventure. The attraction shows park-goers how every LEGO brick is made, then turned into a miniature model. It also has a Miniland, which has a 19-foot tall Empire State Building made from 97,680 bricks, a 23-foot long Brooklyn Bridge, and a miniature St. Patrick's Cathedral.

Meridian Berhad and Malaysia's Ministry of Tourism, Arts and Culture in 2019 signed an agreement to develop a Hasbro-themed water park within the proposed 622-acre Malaysia Tourism City. Get ready to see your favorite Hasbro toys like Monopoly and Play-Doh as reimagined attractions. As of September, the Economic Planning Unit has yet to approve the Malaysia Tourism City initiative worth RM 120 million.

Touted as "one of the most ambitious theme park projects ever in Europe," The London Resort is a two-park resort with the first gate opening in 2024 and the second opening in 2029. The 535-acre site is set to house six themed-zones: The Studios, a modern-day warehouse showcasing how a blockbuster film is made; The Woods, which follows the theme of our favorite fairy tales and bedtime stories; the Kingdom, an immersive realm of legends that England is known for; the Isles or the land of giant creatures; the Jungle, which explores the ancient ruins of a Mesoamerican civilization; and the Starport, an imagined 23rd-century city.

It was originally known as London Paramount Entertainment Resort, but was changed to The London Resort after the film company pulled out of the project. It was later announced that the theme park signed a new deal to still have attractions based on Paramount Pictures' films.

Movie-themed Genting SkyWorlds is set to open within Resorts World Genting, Malaysia’s only casino resort. The project sits on 250 acres of land and is bound to have 25 rides and attractions based on Ice Age, Rio, Life of Pi, Night at the Museum, and more. Genting SkyWorlds was originally named 20th Century Fox World, but was later changed after a deal with 21st Century Fox and The Walt Disney Company.

Japan Seasoned Savvy Asia International Travel Heading Out China England New York Guide Greener Attractions Theme Parks
Your Guide to Thriving in This Strange New World
Staying
In? What to watch, what to eat, and where to shop from home
OR
Heading
Out? What you need to know to stay safe when heading out