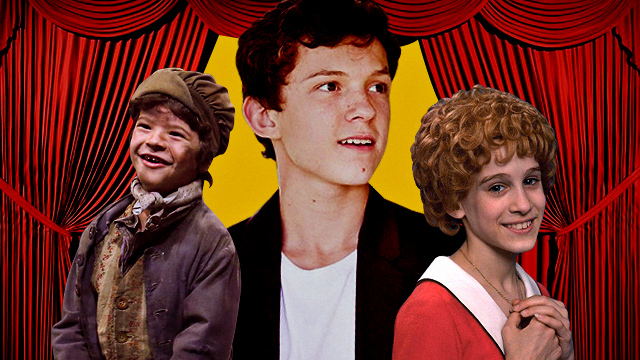 (SPOT.ph) It’s usually easy to pinpoint the role that launched an actor to superstardom— for Robert Downey Jr., it was his Iron Man role in 2008; for Chloë Moretz, there was Kick-Ass in 2010; and for Jennifer Lawrence, it was Winter's Bone also in 2010. Some of them played bit roles or supporting characters before catching their big break, while others got their start in theater—proving that they’re actually triple threats.

We round up Hollywood stars who got their first taste of the spotlight through Broadway or West End:

You may know him as Dustin from Stranger Things, but Gaten Matarazzo actually got his start on Broadway. He played Benjamin in a 2011 production of Priscilla, Queen of the Desert, and was cast as Gavroche in Les Miserables on Broadway in 2014. You may have seen him showcasing his singing chops in the much-talked-about "NeverEnding Story" scene in the third season of the hit Netflix show.

The youngest of the Jonas Brothers was the first to work professionally as a Broadway kid at the age of seven. Before getting married to Priyanka Chopra, dating Miley Cyrus, or being one third of a wildly popular Disney teen boyband, Nick Jonas played a range of little-boy roles in theater: Tiny Tim in A Christmas Carol (2000), Little Jake in Annie Get Your Gun (2001), Chip Potts in Beauty and the Beast (2002), and Gavroche in Les Miserables (2003). He played Marius in the musical’s 25th anniversary concert in 2010 before taking the lead role in How to Succeed in Business Without Really Trying in 2012.

Anna Kendrick’s body of work is incredibly lengthy. She was in four out of five of the Twilight movies, she starred in movie musicals like The Last Five Years and three editions of Pitch Perfect, and was even nominated for a number of awards (including an Oscar) for Up in the Air. But before all that, she played a supporting role in the 1998 Broadway comedy musical High Society. At just 12 years old, she was nominated for Featured Actress in a Musical at the Drama Desk Awards and Tony Awards.

Since Julie Andrews embodies her roles as Mary Poppins and Maria von Trapp, it might not be all that surprising that she started out on stage. But what’s interesting is that she was the original Eliza Doolittle in Broadway’s My Fair Lady in 1956. Audrey Hepburn was cast for the role in the 1964 film version, and rumor has it that the director overlooked Andrews because she lacked movie experience. She went on to star in Mary Poppins in 1963 and bagged the Oscars, Golden Globe, and Grammy—beating My Fair Lady that year.

The Meryl Streep got her start on Broadway, too, and even back then she was already an exceptional performer. One of her first plays was a 1975 production of Trelawny of the ‘Wells’ where she co-starred with Mandy Patinkin and John Lithgow. Before she started getting nominated for Oscars left and right and even before she landed her first major role on film, she was nominated for a Tony in 1976 for her work in 27 Wagons Full of Cotton.

If you’ve seen Frozen, then you know that Kristen Bell can sing—but did you know that she got her musical start on Broadway? The actress went to New York University’s Tisch School of the Arts and majored in Musical Theater. She didn’t graduate, however, as she got the role of Becky Thatcher in the short-lived Broadway musical version of The Adventures of Tom Sawyer in 2001. Another Broadway show under her belt is Arthur Miller’s The Crucible, where she played the role of Susanna Walcott in 2002.

Sarah Jessica Parker is widely known as Carrie Bradshaw in the HBO series Sex and the City, which ran from 1998 to 2003 before being adapted into a film in 2008. But her first taste of acting already happened decades before that. At the age of 11, she made her Broadway debut in the 1976 revival of The Innocents. She was later chosen for the 1977 run of Annie, where she played the role of July before taking the titular role in 1979.

Viola Davis spent the '90s working in on- and off-Broadway plays, years before she was the brilliant defense lawyer Annalise Keating in How to Get Away with Murder. By the 2000s, she had already established herself as one of the leading stage actresses in New York and won a Tony for her performances in King Hedley II (2001) and Fences (2010). She also received the Drama Desk Award for Intimate Apparel in 2004.

Ariana Grande got her big break as a teen star for Nickelodeon. She was in the TV shows Victorious, iCarly, and Sam and Cat, and would contribute songs for their soundtracks. Prior to these, she already had a career onstage as one of the characters in the musical 13 on Broadway.

Tom Holland’s dancing skills may be his actual superpower, as shown in viral videos of him with friends or his unforgettable performance in Lip Sync Battle. But his skills are not newly acquired, as he got his start in the dance-heavy Billy Elliott: The Musical on West End. He was first cast as one of Billy’s friends before taking over the titular role in 2008, rotating with a few other young actors for the role until 2010.

Nikki Francisco is the editor-in-chief of TheaterFansManila.com.