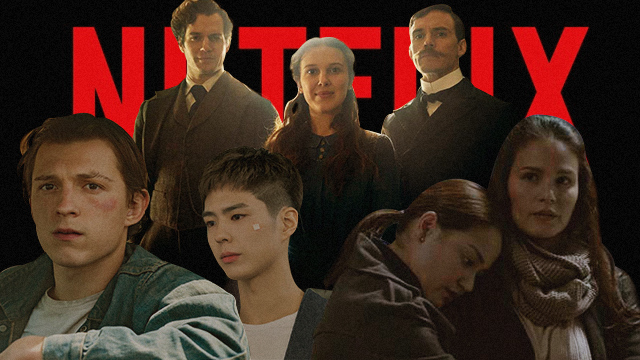 Record of Youth, Devil All the Time + More Cool Things Coming to Netflix in September

(SPOT.ph) Attention, loud and proud couch potatoes! We have the lowdown on the shows and movies hitting Netflix this September—which starts next week, in case you didn't notice. There are exciting thrillers like The Devil All the Time and I'm Thinking of Ending Things, Pinoy indie movies like the hard-hitting Gasping For Air, and the can't-be-missed K-Drama of our favorite Parks, Record of Youth. We round up some of the most exciting content to put on your must-watch list.

This 2017 Cinemalaya entry is one to watch when you have enough emotional strength. Luis (Carlos Dala) and his younger sister Lulu (Barbara Miguel) live on the slow-moving fishing island of Silag. When the aspiring singer Lulu is offered a job in Manila by a "talent manager" she takes the opportunity and leave—only to stop communicating with her family a few months later. Luis then goes off and follows her to the city where he finds her working in a brothel, and completely changed.

Hilary Swank stars as Emma Green, an American astronaut leading the first space mission to Mars. She leaves behind her teenage daughter and husband to spend three years out in space to accomplish the difficult mission. This upcoming science fiction drama series has 10 episodes in line for the first season with creators Jason Katims (Friday Night Lights) and Matt Reeves (Dawn of the Planet of the Apes) at the helm.

Need to exercise your brain cells? Then this pyschological horror film is just the ticket. Directed by Charlie Kaufman (Eternal Sunshine of the Spotless Mind) and based on the debut novel of Iain Reid, the deceptively simple storyline of girl-meets-boyfriend's-parents turns into something sinister and totally surreal. Perfect for late-night existentialist thoughts.

Yup, that's Park Bo Gum and Park So Dam starring as romantic partners! This K-Drama series follows aspiring model and actor Sa Hye Jun (Bo Gum) and makeup artist Ahn Jeong Ha (So Dam Parasite) as they try and make it to the top of their careers. The two are hounded by their own fears—and parental pressure. Anyone else relate to that?

This blockbuster hit was originally scheduled to open in theaters in April—but now you can watch it from the comfort of home! Just try not to be paranoid after watching this zombie apocalypse flick. In #Alive, Joon Woo (Yoo Ah In) and Yu Bin (Park Shin Hye) are neighbors in modern-day Seoul. When zombies begin taking over, the two team up for survival.

Devil All the Time

We're not sure how to recover from that trailer either. Do we freak out about Tom Holland's impeccable southern accent or the singular way Robert Pattinson said "Delusions"? (For which there's an official Netflix 10-minute loop, BTW.) The stellar cast includes Bill Skarsgård, Mia Wasikowska, Haley Bennett, Sebastian Stan, and more. The trailer doesn't give away much about the story—aside from a shit-ton of suspense—but just know that the movie is based on the highlyacclaimed novel of the same name by Donald Ray Pollock.

A Cinemalaya 2018 entry, this heart-wrenching film tackles the return of Liza (Iza Calzado) to her husband and two children—all of whom she pretty much abandoned five years ago. The film follows her return to the Philippines, upon the request of her husband Anton (Nonie Buencamino) after the loss of the love of her life.

Been missing Millie Bobby Brown and her British accent? She's back to star as the younger sister of none other than Detective Sherlock Holmes himself, played by Henry Cavill. This film adaptation of the beloved mystery young-adult series by Nancy Springer also stars Sam Claflin, and Helena Bonham Carter.

Here's another medical K-Drama to add to your list—one with a fantastical twist. School nurse An Eun Young (Jung Yu Mi) has a special power: She can see jellyfish-like monsters that are made from residue of human ill-feelings, all of which she destroys using her toy knife and pellet gun! She is joined by Hong In Pyo (Nam Joo Hyuk), the Chinese language teacher, to clean the school of all the bad mojo.

Missed this 2019 Metro Manila Film Festival entry? (Or just need to watch this rom-com all over again? No judgement here, we're with you, TBH). "Ms. Rom-Com" (Miles Ocampo) teams up with "Mr. Seasoned" (Rocco Nacino) to write the best love story ever. Joem Bascon and Yeng Constantino also star in this movie.

Adventurer Savvy Seasoned Netflix Streaming Services Record Of Youth Park So Dam Park Bo Gum #alive School Nurse Files Distance Iza Calzado Write About Love Enola Holmes Henry Cavill Jude Law Devil All The Time Thinking Of Ending Things Guide
Your Guide to Thriving in This Strange New World
Staying
In? What to watch, what to eat, and where to shop from home
OR
Heading
Out? What you need to know to stay safe when heading out