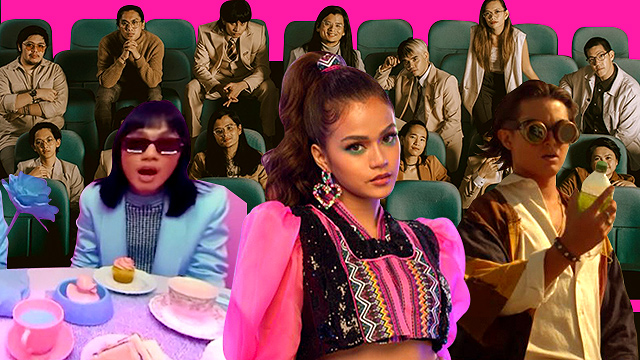 These artists freakin' aced the assignment.

(SPOT.ph) The golden age of rocking out to music videos on MYX and MTV may have already passed—but that doesn’t mean the magic is gone. Music videos can still make a track much better than it already is. Just take a look at this round-up of cool visuals from Pinoy artists! The great thing about music videos is that you can do pretty much whatever—from a 360-degree video to an alien world adventure, these are the ones to watch.

Also read:
10 of the Most Stunning Visuals from Nadine Lustre's Wildest Dreams
The Top 10 Songs for the Crazy Year That Is 2020

Rock out to these with these 10 cool new Pinoy music videos:

Vibes: Put folk, rock, and a bit of pop together in a pot, fire it up with a whole lot of emotions, and you’ve got an excellent dish served up by Ben&Ben and SB19. Who knew an indie-folk band and a P-Pop group could sound so great together? This song got us good—and in our universe, this is totally the redemption arc of the kid from Freddie Aguilar’s “Anak.”

Visuals: The band version of “MAPA” had the two groups rocking it out at the defunct-for-too-long recently restored Manila Metropolitan Theater. The historic setting alone is already cool, but add the fact that we sorely miss live gigs kind of like this, and this music video hits hard.

Vibes: A happy tune with an underlying sadness coursing right through to your heart. Yup, that sounds very much like the introspective Unique Salonga.

Visuals: The tea party concept definitely fits in with a sound that wouldn’t be out of place in an Adult Swim cartoon version of Alice in Wonderland. Plus, that 360-degree treatment has us seeing a new Unique with every rewatch.

Vibes: Adie’s vocals feel like a cup of hot chocolate on a cold night (the type Padre Damaso would give guests he liked, none of your marshmallow-topped watered-down drinks). When done well (Read: like in this track), the dude crooning while on a guitar formula just can’t be beat.

Visuals: Oh yes, that is Ivana Alawi as Paraluman. This short story unfolds on one oddly long but totally entertaining elevator ride. Fun fact: This was written and directed by Bela Padilla.

Vibes: If you ever need a little boost, just pop in this track from Ben&Ben (as we used to say pre-streaming). “Magpahinga” plays out in Ben&Ben’s key comforting sound, this time reminding you that you can, and should, stop and rest easy every now and then.

Visuals: Ben&Ben has given us a slew of must-watch music videos. Remember that short film starring Kathryn Bernardo and Daniel Padilla for “Sa Susunod Na Habang Buhay”? Well, it’s time to shine the light on this tearjerker starring veteran actor Joel Torre and Bela Padilla as a father-daughter duo learning to say goodbye.

Vibes: Maris Racal shows us she’s got more than just quality meme content up her sleeves with this track. Racal amps up the pop and mixes in a very valid life lesson: Aasa pa ba sa wala? Plus, we can’t not mention that epic rap delivery.

Vibes: Okay, so this one’s a bit of an outlier! This music video was made without the backing of an actual recording company, courtesy of Noah Raquel. The producer, singer, and dancer has been taking the social media free-for-all space by storm with their videos of them doing pretty much all at once. Raquel has been putting up these videos since the panini started but it is this cover of Doja Cat and SZA’s hit that we feel will get the ball rolling.

Visuals: This is how people with talent get dressed. Plus dogs! Have we mentioned he does all this with a phone?

Vibes: The unofficial president of the Philippines gifted us with a whole, 30-minute visual album called Wildest Dreams in 2020. If you haven’t experienced this soft, electronic dance beat with Lustre’s dreamlike vocals yet, we can only ask why—and then tell you that there will never be a good enough reason to not watch at least one music video from the album. Just take a look at "Grey Skies."

Vibes: James Reid dropped this otherworldly music video under the Careless Music label (which he co-founded, BTW). We know they’re not officially together anymore, but we love that both he and Lustre gifted us with these chill vibes from the same label. It’s got retro guitar, sweet synth bits, and is an overall smooth ride.

Visuals: Reid plays an astronaut who lands on a distant planet in the year 3038. We follow him as he goes around the mostly desert land, discovering the new terrain—and strange creatures.

Vibes: UDD brought their mystic touch to the Trese series via this ethereal theme song. We know you got major LSS from this track when you binged the Netflix adaptation of the popular graphic novels!

Visuals: This “Not Alive” performance dropped a few minutes before the series was released on Netflix. TBH, we still get excited all over again with every watch of this performance! Plus, note those ghosts in the audience—they’re not just what you think they are.

"The Life I Know (Short Film)" by The Itchyworms

Vibes: The Itchyworms let go of their rocker sounds and slid smoothly into this sweet ballad for their aptly named 2020 album Waiting for the End to Start.

Visuals: Who doesn't love cool stop-motion animation, especially when it's executed this well? The band dropped this music video to celebrate their 25th year in the industry. It tells the sweet story of a kid named Awit learning to adapt to changes in her life, and by changes, we mean a new family member.

SB19 Ben&ben Maris Racal Nadine Lustre Unique Salonga Zild Benitez Adie Noah Raquel Adventurer Savvy Music Video Staying In Greener Guide
Your Guide to Thriving in This Strange New World
Staying
In? What to watch, what to eat, and where to shop from home
OR
Heading
Out? What you need to know to stay safe when heading out