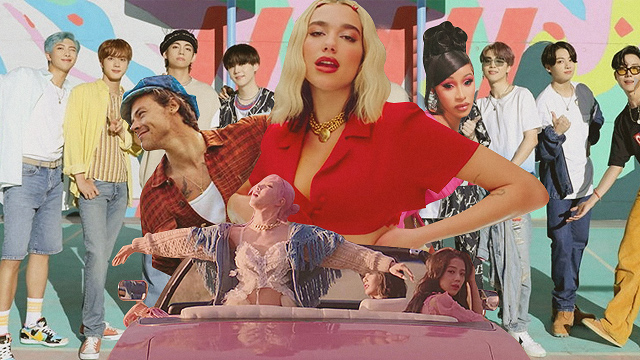 These were the sounds that carried us through the terrible year.

Top 10 Songs for the Crazy Year

(SPOT.ph) So you’re working quietly at your new work-from-home station, just typing away, when it suddenly hits. That soul-crushing, anxiety-inducing knowledge that the world is going through a pandemic and things are never ever going back to the way they were. And while facing things head-on (eventually) is always good advice, there are times when all you can do is blast some jams and lose yourself. That’s okay too. For this list, we round up some of the biggest releases of a very, erm, memorable year and rank them according to just how well their excellent sound made us forget how un-excellent the year has been. Yup, this list is hella subjective.

Forget everything else that came out of 2020, these are the 10 best songs you need to remember:

9. "People I’ve Been Sad" by Christine and the Queens

French artist Christine and the Queens released this soulful synth-pop ballad early in February, just before the world plunged into a down mode—so you can understand the prophetic power of the song’s lyrics. It doesn’t matter if you speak French or not, there’s something about the song and the almost intimate sound in Héloïse Adélaïde Letissier’s voice that just feels like she’s singing all of your feelings. It is the kind of song you yell along to when you've been in the same pambahay outfit you’ve had on for days on end and just need some sort of emotional release.

Road trips may not have been a thing this 2020—but that doesn’t mean we couldn’t imagine we were on one by bopping along to this absolute banger of a track. Miley Cyrus wowed us with another phoenix moment via her Plastic Hearts album, and leading the pack of rock and pop is the break-up anthem of the year, Midnight Sky. From the first '80s old-school synth notes to Miley singing loud and clear, “I don’t need to be loved by you,” this track gave us the perfect mix of anger, badassery, and confidence we needed this year.

Dropping some motivational soft rock this year was Harry Styles crooning about how "Golden" we really are. The song was released right when we needed somebody to tell us something good—and who better to do that than Styles? Match that with a touch of indie pop and that epic choir of what must be angels and this song has us on a completely stressless cloud nine.

Amping up the '80s nostalgia factor is Dua Lipa with an entire slew of top-quality bops thanks to Future Nostalgia. It was incredibly difficult to choose just one track from the synth-heavy album but we have to give it to “Physical” (mostly because it gave us the energy to work out after our sedentary work-from-home lifestyle finally began to take its toll). There were far fewer reasons to smile this year than usual—but "Physical," with its uppity beats and Lipa cheering us on was definitely number one. Add that incredibly '80s dance workout video they released and we’re completely won over.

Finally, K-Pop idol group BLACKPINK dropped their debut album in October—nearly four whole years since they landed on our screens! Sure, we could have gone with “Ice Cream” but we all know this dance-pop ballad, with lyrics by Jisoo and Jennie, deserves this spot more. The electropop beat reaches that perfect party crescendo best for dancing at a rave (or on your own) while still letting the vocals and verses of Jisoo, Rosé, Jennie, and Lisa ring clear. Don’t lie: You definitely had a wild dance party in your room to this song at some point during the quarantine.

4. "Therefore I Am" by Billie Eilish

And bringing it back to the other end of the pop genre spectrum is this dark track courtesy of Billie Eilish and her brother Finneas O’Connell. There’s something about the swagger-filled tempo, Eilish’s unique vocals, and that over-all I-don’t-give-a-damn attitude that makes this song feel like a huge middle finger presented on a silver platter especially for 2020. It's exactly what the year deserves, we think. Plus, that video of Eilish dripping in cool mojo as she does what she wants in an empty mall gets major points.

Look up the expression “tagos sa buto” and you’re sure to find Ben&Ben’s songs as a prime example. This nine-piece folk band always knows exactly how to make us feel things but their track “Di Ka Sayang” just takes it to the next level. They released the soulful song towards the end of 2020, right when people needed a small pat on the back and a whole lot of emotional support. If we’re talking about songs that probably gave people the will to continue on this 2020, “Di Ka Sayang” is the song to beat.

Taylor Swift dropped two whole brand-new albums—written and produced just this same year—and promptly had fans shook with the stripped back direction she took for Folklore. You won’t believe the difficulty we had choosing just one track to include, but in the end, we had to go with the soul-crushing “Exile.” Featuring bare accompaniments, the clean vocals of Bon Iver and Swift, and an incredibly powerful narrative, “Exile” left us picking up the pieces. This song hurt us so bad, it crossed over to heaven territory.

Any doubts people had left over the global power of K-Pop were basically crushed when BTS dropped their first full-English track in August. It’s in the name: “Dynamite.” This pastel-colored disco-pop explosion—because yes, it sounded so good it made us see things—gave us the good vibes we badly needed to have amid the general horror of 2020. The slew of performances, appearances, and yes, discussions over what the global domination of a Korean idol group meant that soon followed signaled a huge change in the world—the kind that actually gave us hope for the future.

Adventurer Savvy Seasoned Music Top 10 Bts Taylor Swift Blackpink Ben&ben Billie Eilish Dua Lipa Harry Styles Cardi B Christine And The Queens Staying In
Your Guide to Thriving in This Strange New World
Staying
In? What to watch, what to eat, and where to shop from home
OR
Heading
Out? What you need to know to stay safe when heading out