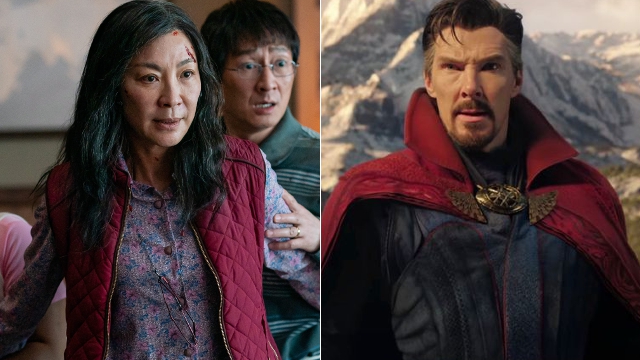 Doctor Strange vs. Michelle Yeoh: Who Had the Better Multiverse Movie?

It's third eyes versus googly eyes.

(SPOT.ph) Over the recent years, we’ve seen the concept of a “multiverse” explored in films and series that have successfully landed with the general audience. Between popular films like Spider-Man: Into the Spider-Verse, the Dan Harmon-created series Rick & Morty and Community, and even obscure time-loop films like Happy Death Day and Source Code (which play around with the concept of alternate realities based off a single situation), it’s clear that audiences don’t find the multiverse concept difficult to consume and that storytellers are allowed infinite pathways when trying to creatively explore this plot device.

However, never in film history have we had two major, mainstream films that delve into the multiverse concept release within such close time frame of one another, yet here we are with the huge releases of Doctor Strange in the Multiverse of Madness from Marvel Studios and Everything Everywhere All at Once from distributor A24. Ergo, we’re going to compare the two to determine which does the multiverse better.

To do that, we’re going to be looking at two major aspects: how each film uses the multiverse plot device and what story is each film trying to tell. Beware that spoilers are ahead, so get ready to open your third eye—or paste a googly eye on your forehead, doesn’t matter—and tell your tax auditor that you love them in every universe, because we’re deep diving into the multiverse.

Also read: To Cinemas and Beyond: Here Are the Movies You Shouldn’t Miss This June

How is the Multiverse Used in Doctor Strange and Everything Everywhere All at Once?

In Doctor Strange in the Multiverse of Madness, you’d think that Doctor Strange (Benedict Cumberbatch) would go insane over the sheer volume of weird and abstract universes traveled to in the film, but no. After a brief sequence of falling through different universes (including a paint one and an animated universe, among others), Strange and his partner America Chavez (Xochitl Gomez) just find themselves in a technologically advanced New York City, where most of the middle act is set. Strange later gets thrown into another universe that’s essentially just “decaying New York City,” the last alternate reality the film visits before it wraps up.

The film primarily uses the multiverse to introduce new versions of our established characters, such as Strange and Scarlet Witch (Elizabeth Olsen). The film repeatedly visits imagery of distorted and fractured mirrors to evoke the many, flawed sides of our “heroes.” Strange encounters three different variants of himself, all of whom are egotistical to varying degrees of evil, which forces Strange to internally confront his own need to be in control of everything.

Meanwhile, Wanda comes face-to-face with a variant of herself that is a mother that she hopes to be, only to realize that she can never be that if she stays on the path of rage and destruction that she’s on. Additionally, there’s the Illuminati, who are alternate versions of fan-favorite characters, but they’re more of an action set piece than actual characters, as they’re disposed of rather quickly.

On the other hand, in Everything Everywhere All at Once, a wide variety of universes are explored and integrated into the main story mostly via jump cuts that indicate the consciousness of the main Evelyn (Michelle Yeoh) we’re following is now in a different universe. Most of the universes depicted on the screen are more of split-second references to movies, genres, and other forms of entertainment media that your brain is only supposed to recognize and quickly associate with a vague past memory, before it moves on to the next universe.

The film does have a handful of universes that are crucial to the story, two of which notably being universes referencing the Pixar film Ratatouille and the Wong Kar-wai classic In the Mood for Love. Multiverse absurdity is what the film seems to primarily be going for, with inclusions such as a universe wherein people’s fingers are made of sausages and the whole idea of doing weird tasks to trigger the Matrix-esque “verse-jumping” plot device.

The first act of the film utilizes the multiverse and the absurdity to find a dynamic and idiosyncratic rhythm in its editing and fight scene choreography. The first act is fantastically overwhelming, as the title itself suggests, but in the best way possible. Everything Everywhere All at Once is definitely the more ambitious and dedicated film among the two, in terms of utilizing the multiverse concept, but its trouble lies more in fulfilling the big promises that it lays out early on.

What Stories Were the Movies Trying to Tell?

Everything Everywhere All at Once promises early on a vast multiverse and a powerful villain embittered by feeling at every moment the said vastness in its entirety. However, after a couple fight scenes and a few scenes of characters just schlock philosophizing over their existence being small in the grand scheme of things, the film practically boils down to the conclusion that “nothing matters, so choose to be kind!”

It's not a necessarily bad central theme, but it feels like a deflating point to land on after an hour of big talking points about existence being thrown around. The execution of said thematic conclusion also does feel a bit patronizing, as the film’s climax drags on for quite a while as we have to watch Evelyn wrap up the storylines of what felt like a dozen different side-universes by making amends with another character or actively trying to make their life better. Finally, she reaches her daughter, the main emotional relationship developed throughout the film, only to do the same with her, but by which point already feels heavy-handed and redundant.

Meanwhile, Doctor Strange in the Multiverse of Madness does have in its favor that it isn’t all that ambitious with the multiverse, which is why it can find middling success in just simple scenes of Strange letting America take the lead in saving the day and Wanda promising her other self that she will love her kids. It definitely still feels wrong that Wanda would try to wipe herself out of existence rather than learn to move on from her loss and face the consequences of her actions, but that’s a separate discussion.

Both films use the multiverse to reference popular films and both films center on stories of a mom who has lost her place in the world. However, they take wildly different approaches to these stories, to varying degrees of success. Everything Everywhere All at Once definitely takes the cake for better multiverse movie, even if its conclusions aren’t all that insightful. No need to worry about that though, because, as it points out, there’s definitely “another life” wherein both these movies work out for everyone.

Verdict: Everything Everywhere All at Once

Doctor Strange in the Multiverse of Madness is currently playing in cinemas. Everything Everywhere All at Once is set to be released in Philippine cinemas by TBA Studios soon.

Doctor Strange In The Multiverse Of Madness Everything Everywhere All At Once Marvel Marvel Cinematic Universe A24 Multiverse Movies Adventurer Savvy Greener
Explore Spot.ph