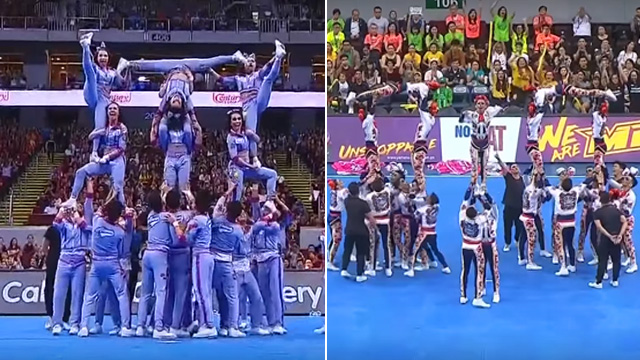 Time for a Throwback: All the Winning UAAP Cheerdance Performances From the Past Decade

Are you ready for Season 82?

(SPOT.ph) We’re nearing the most exciting part of the 82nd season of the University Athletic Association of the Philippines—and nope, we’re not talking about the basketball championships (sorry not sorry). The Cheerdance Competition is coming up so it’s time to prepare ourselves for a wild day of strained relationships, sanity-breaking pressure, possible cases of hypertension, and more. Take note that the previously described scene is only for the audience (a.k.a. you and me, probably). We can only guess what the athletes of the competing schools will be feeling.

To really get us all in the mood, we round up the teams that shone the most at the University Athletic Association of the Philippines (UAAP) Cheerdance Competition (CDC) in the past decade. From the fierce competition between the established university powerhouses to surprise winners, each performance has led up to today’s competition; Looks like it’s time once again to choose your bets for the 2019 UAAP cheerdance champion.

Here are the past 10 champions of the UAAP CDC:

The University of the Philippines (UP) Pep Squad had barely recovered from their previous back-to-back win in 2007 and 2008—having taken the crown right from the original unbeatables, the University of Santo Tomas Salinggawi Dance Troupe—when the Far Eastern University (FEU) swooped right in and claimed the throne. The FEU Pep Squad took the Sarimanok logo of the season and used it to create a stunning routine; who knew a rooster could be great inspiration for a dance?

The UP Pep Squad managed to get their throne back in the following season, with FEU close behind as 1st runner-up. UST’s Salinggawi also made it back to the podium, marking this year’s competition a close fight between the “big three” pep squads of earlier years. Despite the backlash on the fiesta theme, it worked out for the UP Pep Squad who played it out with banderitas-inspired skirts and masks.

The squads went full-on diva for this season, and UP brought it to the next level with bright blonde hair à la Madonna—not the last time they used their hairstyle to their advantage. Plus, how can we not mention the cone bras? The defending champions not only kept their throne, they also came in first in the Group Stunt category. De La Salle University also found their way back into the top three, making it to second place.

The UP Pep Squad made sure to win big to make their three-peat championship something worth remembering. Who can forget those "bald and bold" heads? Their shaved heads was like the shiny cherry on top of the clean and minimal choreography sundae they served ice cold in Season 75. Also, not only did they break the norm with women doing the heavy lifting, but this three-peat gave them an awe-inspiring record of eight championship titles since the UAAP CDC began in 1994—a feat only UST had claim to until then.

A changing tide was brought in with the National University Bulldogs Pep Squad’s first-ever championship in 2013. All the universities delivered quirky routines, from second-placer UP’s ‘80s inspired presentation to NU’s own Arabian Nights theme. NU’s practically flawless routine brought the old underdog to the forefront, and it looks like they haven’t backed out of the spotlight since.

Complete with Mohawks, feathered headgear, and Native American-inspired fringes, the NU Bulldogs delivered a routine that proved they weren’t about to let go of their newfound championship title. The UP Pep Squad claimed second place with a routine that highlighted the issue of equality—a socially relevant angle that launched quite the discussion on who should have won. Despite the usual talks, no one can deny NU Bulldogs gave us a seamless routine full of impressive stunts.

The next season proved that the NU Bulldogs were shifting the old dynamics of the Cheerdance Competition with a three-peat championship win—despite the controversy. Many complained that their caveman-themed routine, which arguably wasn’t at par with the technical flawlessness of past performances, just didn’t stand up against the performances of second-place finishers, University of Santo Tomas' Salinggawi Dance Troupe and the UP Pep Squad’s “Utak at Puso” routine.

The NU Bulldogs continued their streak with the fourth championship in a row in Season 79—yup, the same year that the UP Pep Squad opted out of the competition in protest of the 2015 results. NU’s cyborg-inspired routine took on new levels of technical difficulty, once again earning them the top honors. FEU took second place with a Broadway-inspired routine, followed by the Adamson University and their “Aloha” routine; their entrance into the top three was only a sign of what was to come.

NU Bulldogs took a step back in 2017, with Adamson University (AdU) claiming the top spot—their first ever championship since the competition began. Nobody saw their ‘80s oversized bows and Grease Lightning-esque outfits coming, but their seamless performance gave everyone the (pleasant) shock of their lives. It was the first time since 1994 that a school that wasn’t UST, FEU, UP, or NU won the championship.

The NU Bulldogs came back in a big way to reclaim their championship title in Season 81. In Dia De Los Muertos outfits inspired by the Coco (2017) film, complete with blooms in their hair, the NU squad performed an impressive routine that was probably cleaner than a hospital ward—and awesome enough to win back their throne. It was their fifth title and it probably won’t be their last.