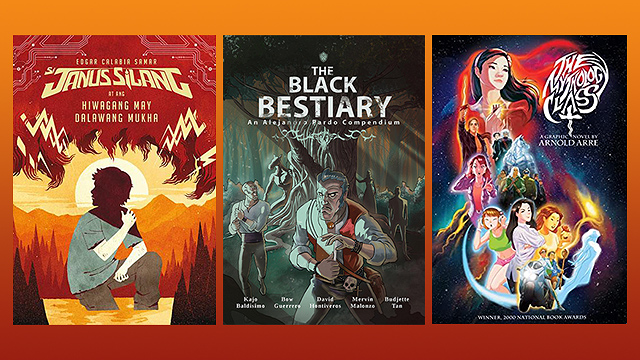 Our local folklore is a treasure trove of beautiful stories.

(SPOT.ph) Whether you’ve been a fan of Budjette Tan and Kajo Baldisimo’s comic-book series Trese since 2008 or just got into it because of Netflix’s adaptation, Alexandra Trese's encounters with creatures of the underworld must have piqued your interest in Philippine mythology. Along with our legends, epics, and other folktales, our local myth is as rich and as varied as our number of islands and variety of ethnolinguistic tribes. It’s a treasure trove of stories that can be told and retold, adapted to different times, and transformed creatively. So it’s no surprise that a lot of Filipino writers have delved into harnessing our folklore to produce short stories, novels, graphic novels, or compilations about Philippine mythology.

Also read:
Let's Compare: The Creatures of Trese and the OGs of Filipino Folklore
10 Gorgeous Filipino Comics That We Also Need to See as Animated Series
10 Popular Pinoy Comics You Need to Read on Penlab.Ink
10 Best-Selling Comics You Need to Check Out From Komiket

Check out these local books about Philippine mythology:

Edgar Calabia Samar's Si Janus Sílang at ang Tiyanak ng Tabon first came out in 2014, and has since given birth to three more books: Si Janus Sílang at ang Labanáng Manananggal-Mambabarang (2015), Si Janus Sílang at Pitumpu't Pitong Pusong, and Si Janus Sílang at ang Hiwagang May Dalawang Mukha. It follows the adventures of the titular character, who is fond of playing the online game TALA (Terra Anima Legion of Anitos). Unknown to him, this mysterious world goes beyond the Internet and leads to a parallel universe of tiyanak, manananggal, do-ol, and other supernatural creatures. The book series has also been adapted to manga by Carljoe Javier and Natasha Ringor.

The Lost Journal of Alejandro Pardo: Creatures & Beasts of Philippine Folklore details the exploits of Alejandro Pardo as he catalogs and chronicles the truths about the ghastly beasts in our underworld. Written in a journal format, it reveals the secrets and mysteries of the creatures of the dark, such as the kapre, malakat, tikbalang, batibat, and mandurugo.

Available as an e-book on Summit Books  and Lazada.

Released two years after The Lost Journal of Alejandro Pardo, The Black Bestiary: An Alejandro Pardo Compendium follows a more inward narrative that focuses on the aftermath of the journal's publishing rather than the creatures and beasts. It also tries to make sense of Alejandro Pardo's own dark secret.

More of an anthology rather than a modern retelling, Treasury of Stories compiles the many myths, legends, epics, and folk stories gathered from indigenous groups all over the Philippine archipelago. It was co-prepared by eminent Philippine anthropologist and National Scientist of the Philippines E. Arsenio Manuel, who spent most of his career rediscovering and publishing folk epics especially of the Manuvi, Matigsalug, and Ilianon ethnolinguistic groups.

Available on Anvil, Shopee, and Lazada.

El Folk-lore Filipino was Isabelo de los Reyes' winning entry at the Exposición Filipina in Madrid in 1887, and eventually one of the greatest contributions not only in Philippine literature but in the social sciences. It was later published in 1889 in two volumes. University of the Philippines' publication was translated in English by Salud C. Dizon and Maria Elinora Peralta-Imson. Aside from cataloging folkloric material from Ilocos Sur, Zambales, and Malabon, El Folk-lore Filipino also traces the shared knowledge across our entire archipelago despite differences in our customs.

Available on UP Press, Shopee, and Lazada.

Mga Nilalang na Kagila-gilalas is a mini-encyclopedia of creatures from Philippine mythology, including our multitude of anito, aswang, diwata, and bathala. It was originally published in 2015, then reprinted in 2019 to include illustrations by Leo Kempis Ang, Sergio Bumatay III, Mico Dimagiba, JC Galag, Kat Matias, Jap Mikel, Harry Monzon, Stephen Prestado, Conrad Raquel, and Borg Sinaban.

Created by Filipino-Canadian comic-book author J. Torres with illustrations by Elbert Or and Jill Beaton, Lola: A Ghost Story weaves Filipino mythology into an all-too-familiar story about family. It follows Jesse, who discovers that he has the same otherworldly vision that his grandmother had when she was still alive. The paperback copy is stocked in limited quantities at local bookstores. You can still get it as an e-book on Kindle; this edition was released in March 2020 andincludes a revised ending and updated illustration of the original hardcover copy published in 2009.

Available as a paperback at Fully Booked and as an e-book on Amazon Kindle.

Tabi Po follows the story of Elias, a flesh-eating and shapeshifting aswang who not only has to cope with life among humans, but also has to deal with living in a colonized country. Tabi Po Volume 1 won in the graphic literature category at the 34th National Book Awards in 2014.

Available at Mervstore. It is also available as an e-book through Tabi Po’s website.

The two-volume Salamangka brings the spotlight on the mysterious world of Filipino folklore through intricate and vibrant art as reimagined by artist Ian Sta. Maria. When asked about his goal for the book, the artist told SPOT.ph in a previous interview that it was his own spin "on Filipino characters, legends, or creatures in short story contexts to help spark a reader’s imagination could be a simple way of having a somewhat interactive artbook."

The Mythology Class was first published as a four-issue graphic novel in 1999 before it was reprinted by Adarna House in 2005, then by Nautilus Comics in 2015. The National Book Awards-winning series follows anthropology student Nicole Lacson, who finds herself face to face with all sorts of aswang and engkantos. She goes on a journey to save the world alongside her childhood heroes like Sulayman and Lam-Ang through the streets of Metro Manila.

Available on Shopee and Lazada.

Books Affiliate Shopee Lazada Guide Summit Books Anvil Publishing Adarna House Mythology Trese Adventurer Savvy Seasoned Staying In
Your Guide to Thriving in This Strange New World
Staying
In? What to watch, what to eat, and where to shop from home
OR
Heading
Out? What you need to know to stay safe when heading out