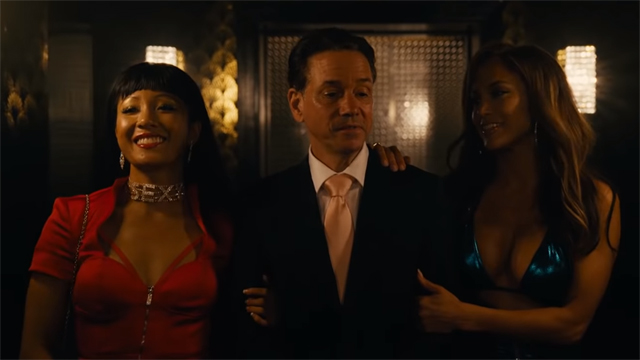 Here Are All the Badass Women in the Hustlers Trailer

Because who can say no to a cast of such cool women?

(SPOT.ph) There's nothing like women supporting other women and accomplishing spectacular feats together. You've seen what a powerful female cast can do with the likes of Ocean's 8, and if you're raring to see another ensemble of badass women achieve a common goal, we have some good news: the Hustlers trailer is out and it stars Constance Wu and Jennifer Lopez, and five other badass actresses.

Struggling to make ends meet, single mom Dorothy, played by Wu, takes on a stripper job with the aim of providing for her family. Having had enough of the horrible treatment from customers and not making enough, she devises a scheme to scam her clients. Veteran stripper Ramona (Lopez) believes that the Wall Street men they service are keeping all the money to themselves and moves to set things straight. She takes Dorothy under her wing and helps her set her plan into motion. The first step? Assembling a team of fellow strippers.

The film is based on an actual story called "The Hustlers at Scores" written by journalist Jessica Pressler for New York Magazine in 2015, detailing the story of how strippers manipulated money out of their patrons' pockets.

It sounds hardcore on paper, and the credits only add to that. Here are the women we're excited to see in Hustlers:

You've seen her before as headstrong Rachel Chu in Crazy Rich Asians and feisty mom Jessica Huang in Fresh Off the Boat, and this time around, she's taking the lead as Dorothy, or Destiny when she performs. Her only goal is to take care of her family and okay, maybe go shopping once in a while (we can relate), but the stripper job doesn't make that too easy.

The multi-hyphenate has starred in movies like The Wedding Planner and Maid in Manhattan, has chart-topping bops like "Let's Get Loud" and" On the Floor," and even had a short stint as a judge on American Idol. And she's a killer dancer, too. It's a pretty safe bet she'll kill it as Ramona.

This actress got her start on the film Akeelah and the Bee and went on to star in programs under Nickelodeon (remember True Jackson VP?) and later even appear in Scream Queens. Not much is known about her character Mercedes from the trailer, but it just can't be a heist film without a team to activate the plan, and Palmer's character plays one of Ramona's stripper associates.

The Riverdale star is sweet and lovable as Betty Cooper, but her role in Hustlers is anything but. The trailer shows Reinhart's character Annabelle going wild at the sight of champagne and encouraging clients to drink. Like Palmer, she plays another one of Ramona's stripper associates.

True self-love is taking a cue from Someone Great and popping open a bottle of wine while rapping along to singer-rapper Lizzo's track "Truth Hurts." You can also sing along to her song "Juice" for a change of tempo, but with the same amount of #LoveYourself. Lizzo plays Liz and appears briefly in the trailer. We're not yet sure how her character is intrumental to the plan, but we won't say no to seeing a confident woman on screen.

The background music for the trailer is by rapper Cardi B and the track is fittingly titled "Money." Aside from lending her music to the film, she also makes a brief appearance as the character Diamond. Badass movie with a killer song? We think yes.

The Bourne Identity and Silver Linings Playbook actress plays a journalist named Elizabeth who is writing a story on the scam. She's likely playing a character based on Jessica Pressler, writer of the New York Magazine feature that inspired Hustlers.