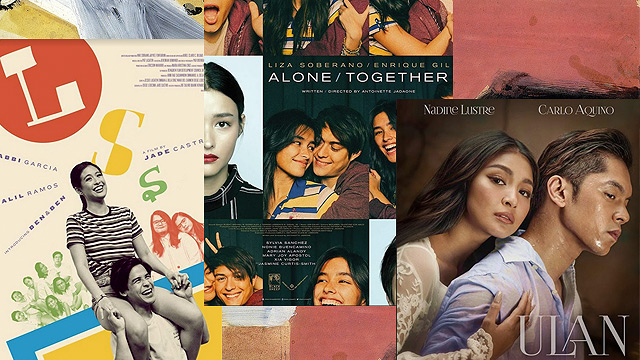 10 Local Songs That Made Tearjerkers Out of Trailers

Which trailers have made you cry recently?

(SPOT.ph) A good trailer makes you want to set aside a couple of hours of your day to watch the movie. Though only a short snippet of a what a full film has to offer, it still appeals to your emotions, whether it’s sadness, happiness, or kilig. Effective trailers take more than just stunning visuals—it also uses the perfect song to drive home the emotions, like these 10 OPM tunes in local movie trailers that made us feel all sorts of things.

Here are 10 OPM songs used in movie trailers that made us cry:

The lyrics of this ballad capture the star-crossed romance and drama of Hello, Love, Goodbye. Joy (Kathryn Bernardo) and Ethan (Alden Richards) are overseas workers trying their luck in fast-paced Hong Kong. Despite their conflicting personalities and life goals, they fall in love—or “not” in love as their inside joke goes. The trailer builds momentum until Joy tearfully delivers her quotable line: “Kung mahal mo ako, bakit pinapapili mo ako?” Fun fact: Less than two months since its premiere, the movie has earned over P880 million worldwide, making it the highest-grossing local film of all time.

LSS follows Sarah (Gabbi Garcia) and Zak (Khalil Ramos), two strangers who share a love for folk pop band Ben&Ben, so it’s only fitting that the band scores the movie trailer. It opens with Sarah and Zak ugly crying at a Ben&Ben gig, an intriguing contrast with everyone else in high spirits. As their story unfolds, Ben&Ben’s reluctantly hopeful “Pagtingin” hints at the push and pull of two people who are just starting to fall in love. The trailer cuts back to and ends with Sarah and Zak crying at the gig, faces just inches away from each other. If the trailer leaves you wanting more, Ben&Ben got Garcia and Ramos—who are a couple in real life by the way—to star in the official music video of the song.

“Sana” by I Belong to the Zoo

Even before it was featured in the trailer of Open, “Sana” has been the song of the forlorn since it came out in 2018. The lyrics took on a different meaning when it was paired with the movie about a couple trying out an open agreement to save their relationship. With Ethan (JC Santos) pushing to see other people and Rome (Arci Muñoz) reluctantly agreeing to it, you can feel that the open agreement is simply a band-aid to a deep, deep wound. As the trailer wraps up, Rome’s line, “Kulang na kulang ba ako?” perfectly syncs with the lyric, “Sana sinabi mo.”

Ebe Dancel’s beautiful, wedding-worthy song about all roads leading to the love of your life is perfect for the meet-cute of Spencer (Arjo Atayde) and Julia (Jessy Mendiola) in Stranded. Spencer is the delivery guy who arrives late at Julia’s office, and they end up being the only people stranded there when a typhoon hits the city. Though things start out rough between them, the circumstances lead them to find common ground and something unexpected in the midst of the raging storm.

Any college graduate knows how much easier it is to make grand promises when you’re a bright-eyed student with the whole future ahead of you. But the real world can be brutal and can break even the sincerest of promises, as hinted at in the trailer of Alone/Together. When college sweethearts Christine (Liza Soberano) and Raf (Enrique Gil) meet by chance five years after breaking up, the what ifs come rushing in like it was just yesterday that they were falling in love. As the trailer cuts to the present, where the exes lead different lives with different people, JM de Guzman’s cover of Rivermaya’s “214” starts playing. It scores the stark reality of their current lives, but its “you and me against the world” theme suggests that sparks still fly even after all this time.

“Your Universe” by Acel

Used in: Between Maybes

In Between Maybes, two Filipinos meet while seeking refuge in a small, suburban town in Japan. Acel’s cover of Rico Blanco’s “Your Universe” captures the quiet romance brewing between Hazel (Julia Barretto), a famous actress in the Philippines, and Louie (Gerald Anderson), the son of overseas Filipino workers who are deported from Japan to the Philippines. Stripped back and restrained, the cover song reflects the peaceful life that both characters long to have but may not be able to attain together.

Physical intimacy is one thing that makes dating difficult enough as it is—imagine how much more complicated it can be between two sex workers. Adela (Sue Ramirez) is the “senpai” (teacher) to the newbie Ram (RK Bagatsing) in the movie Cuddle Weather. In between sessions, things get more and more complicated, definitely warranting the use of the song “Migraine.” Sue covers Moonstar88’s song for the movie: “Oo nga pala, hindi nga pala tayo. Hanggang dito lang ako, nangangarap na mapa-sa'yo.”

Maya (Nadine Lustre) grew up on superstitions like the classic one that Filipinos bring up whenever it rains while the sun is shining: “May kinakasal na tikbalang (half-horse, half-human mythical creature).” As an adult nursing a broken heart, Maya notices that it rains whenever something good happens to her. She vows to never cry about love again, but meeting Peter (Carlo Aquino) might just change all that. The trailer purposely keeps details under wraps, and Janine Tenoso’s folksy guitar version of Rivermaya’s “Ulan” adds to the mysterious vibe. Indeed, “sinong di mababaliw sa ulan?”

Used in: Finding You

Nel (Jerome Ponce) has suffered heartbreak after heartbreak on his quest to find The One. Since he has a condition that makes him remember every single thing that happens in his life down to the minute, getting over his past loves is quite the challenge. Unbeknownst to him, Kit (Jane Oineza), his best friend who has been by his side all this time, also feels his pain for entirely different reasons. With lyrics like, “Kakalimutan na kita, siguraduhin mong hindi talaga puwedeng tayo. Napag-isipan mo na ba? Dahil kakalimutan na kita,” Munimuni’s “Sa Hindi Pag-alala” feels like it was made for this story.