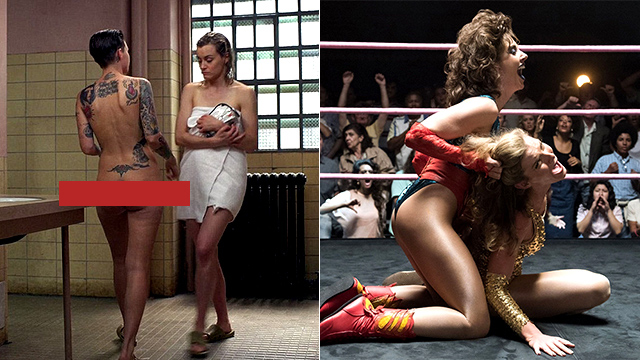 For your super-specific entertainment needs.

(SPOT.ph) While the great Sir Mix-A-Lot once said that he “likes big butts and [he] cannot lie,” we are here to proudly declare that all butts, in our opinion, deserve your attention—especially when they’re available to stream and appreciate in all their naked glory (accompanied by an entire human being in a compelling story of course, but let’s be real, that’s not why you clicked on this article). Below, we list some of the cutest pairs currently on Netflix because, well, in case you needed something to lift your spirits today.

Also read:
Forget Fifty Shades, This Steamy Tell-All Book By a Gigolo Will Get You Hooked
This Online Adult Store Has Sex Toys for Every Zodiac Sign
Top 10 Movies With the Steamiest Sex Scenes
10 Perfect Places for Breaking Up in Manila

Going full-moon spotting on Netflix? Here’s a handy guide to the 10 best butts to watch for:

Raise your hand if that sudden cut to Anthony B.’s (Jonathan Bailey) bare bum scandalized—and delighted—the tita within you. The huge tone shift for this Regency-era drama was very thankfully kept up for the rest of the season. Fast-forwarding to episodes five and six, and somehow, the butt gods proved to be even more generous. The Duke’s bare peach-smooth pair let itself be very well-known to viewers as Simon and Daphne (Regé-Jean Page and Phoebe Dynevor) ehem, cavorted all over the dukedom and we can’t be anymore thankful than we already are for this opportunity to witness it all (those scenes, BTW, were filmed with an intimacy coordinator). We’re putting this gift from Shondaland up there alongside everything Grey’s Anatomy has ever given us.

Enchong Dee and Jasmine Curtis-Smith couldn’t possibly enter the infamous alter subculture without some steamy scenes. And with Dee playing a coveted escort, he gets very creative with some whipped cream and, of course, puts his super-toned swimmers’ cheeks to good use. There’s a rather lengthy bit in the intro effectively establishing the skill he has for his occupation and yup, it’s one of the film’s main highlights.

Orange Is the New Black

No way Ruby Rose could be left out of a list like this. The Aussie model had everyone shocked out of their shells with that shower scene from the third season of Orange Is the New Black. Sporting nothing but her tattoos and truckloads of self-confidence and self-assuredness (somebody give us some of that), her character Stella chats it up with Piper (Taylor Schilling)—who very understandably stalls the conversation long enough to erm, we suppose, check out her cool tattoos!

The second season of Sex Education brought more diversity, wholesome stories, legit education, and even a shot of Otis’s (Asa Butterfield) oddly adorable-looking bum. Sure, the story gets a bit of an unexpected twist nearing the end of the season as a “gathering,”—definitely not a party, says Otis—ends with his mom, Dr. Jean Milburn (Gillian Anderson), catching a glimpse of him sleeping butt-naked and butt-side up next to someone who isn’t Maeve (Emma Mackey). Butterfield even took to Twitter to declare how “liberated” he feels knowing a shot of his ass is up in the airwaves. “Cheeks out boys, it’s 2020,” he said—and we couldn’t agree more.

A Canadian sitcom about a suburban couple who falls for an escort they hired to spice up their sex life—as in, they end up a “throuple.” Oh, you know you want it. You Me Her has no end of steamy-slash-funny steamy scenes, and we have to give a special shoutout to all the times Izzy’s (Priscilla Faia) backside stole the show during the many sex scenes.

Decked out in glitzy, kitschy ‘80s pro-wrestling outfits, Alison Brie and Betty Gilpin’s derrieres were in the spotlight more than once. The two play besties-turned-enemies Ruth Wilder and Debbie Eagan, who in the wrestling world are known as Zoya the Destroya and Liberty Belle respectively, for this comedy-drama about women making it in a man’s world. Needless to say, the unresolved tension between them makes for a great wrestling match—and all the bright ’80s outfits and those high-cut bottoms are a huge plus for their backsides.

It was bound to happen. Tom Ellis finally went full backside-naked for his role as the fallen angel in season five of this Netflix hit series. It’s no secret that Lucifer is built like the devil himself—get it?—but this glimpse was a very welcome confirmation of the fact. Netflix even sneaked a second or two of the bare-bum shot in the season’s trailer, promptly sending the fan base into havoc.

You have definitely seen the still of Zac Efron peeing horizontally into the toilet with his toned bum up in the air—and just in case you were wondering, you can watch the full scene in this cutesy 2014 rom-com. Efron stars as Jason, a dude’s dude who makes a promise with his dude friends Daniel (Miles Teller) and Mikey (Michael B. Jordan) to all stay single, right as he ends up meeting a girl who could be “The One.” We’re throwing this one into the mix for some much-needed nostalgia.

Ursula Corbero completely owns the bad girl stereotype as the gun-toting, hard-shelled Tokyo in the Spanish-produced La Casa de Papel. It’s hard not to fall for this grown-up version of Mathilda Lando (There’s no way Natalie Portman wasn’t some form of influence for her character). As proof of her ridiculous attractiveness, even while our hearts were racing when Denver offered her up to authorities in the second season and she was forced to strip for a bomb search, we couldn’t help but be the least bit sidetracked by her backside—that is, until she began that epic last dash for freedom.

Adventurer Savvy Seasoned Netflix Streaming Services Sex Education Bridgerton Sense8 Money Heist Zac Efron That Awkward Moment Lucifer Glow Alison Brie Orange Is The New Black Alter Me Guide Staying In
Your Guide to Thriving in This Strange New World
Staying
In? What to watch, what to eat, and where to shop from home
OR
Heading
Out? What you need to know to stay safe when heading out