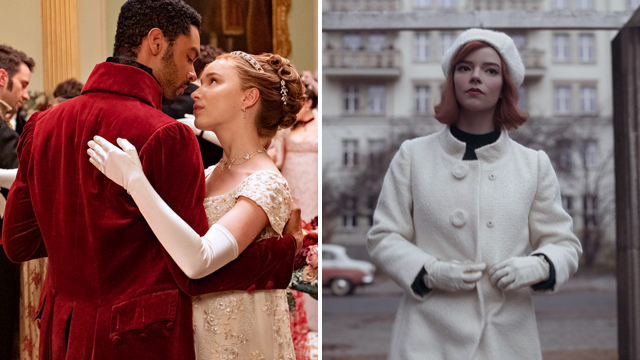 What is it about these two Netflix series that got people hooked?

(SPOT.ph) It's official: Bridgerton is Netflix's biggest series to date. With 82 million households tuning in during the first 28 days since its release, a place in the top spot of the streaming service's top 10 in 83 countries, and even Julia Quinn's OG books hitting the The New York Times bestseller lists for the first time (18 years after they were first published, to be exact), it's clear the world is hooked on this steamy regency drama.

The news was confirmed by Jenny Howe, Netflix's vice-president for original series, in a statement. "In a pop culture world dominated by sci-fi and fantasy, I’ve always loved beautiful, lush romances," she wrote while pondering the massive success of the Shondaland-produced period drama. And indeed, even Lady Whistledown may not be able to explain why people became obsessed with a romance series when barely a few years ago we were all riding high on the gore and lore of shows like Game of Thrones.

Howe listed down lessons she learned from Bridgerton—which happens to be her first project for Netflix—enumerating what set the series apart. Unsurprisingly, another record-breaking series popped up in her discussion: The Queen's Gambit! Beth Harmon (Anya Taylor-Joy) and her climb to stardom in the male-dominated world of chess in the latter half of the 20th century had everyone suddenly bringing out their own boards. Around 62 million households tuned in during the show's first 28 days on the platform in another record-breaking feat for Netflix.

What Set Bridgerton and The Queen's Gambit Apart?

"It pays to be bold and to take creative 'risks,'" said Howe, and the two series are prime examples of that.

The Queen's Gambit followed Harmon's journey from orphan to chess rockstar—which meant audiences were in for a time-traveling ride from the '50s to the '70s. From sweeping shots of different hotels in different times and places to Beth's impeccable wardrobe, it's no doubt that world-building in The Queen's Gambit was immersive.

Bridgerton, set in 1813 London, "lifts the facade of Regency life," said Howe. Showrunner Chris Van Dusen led the reimagining of this Regency period drama which unashamedly doesn't aim for historical accuracy—remember those epic Taylor Swift and Billie Eilish covers in the soundtrack—and instead is "more lavish, sexier and funnier than the standard period drama."

But with settings in a very specific time and place that most audiences across the globe have no real connection to, the two series still somehow managed to ensnare. "Bridgerton, like The Queen's Gambit, defies tradition, and demonstrates that period dramas are not limited in scope or audience."

Another important aspect of both shows is that it allowed for more representation. "More people want to see themselves reflected on the screen," adds Howe. Shondaland is known for diversity—and the added storyline of Queen Charlotte (Golda Rosheuvel) to Quinn's original novels gave the adaptation an entirely new layer. As Regé-Jean Page, a.k.a. the Duke, put it in an interview with SPOT.ph, "I hope that what audiences take from this, beyond anything, is being able to see a woman like Golda inhabit that position in society so effortlessly. And how it feels so, so right on her. I think that that can be inspiring for everyone that watches the show."

Harmon herself was a character that was so rare you couldn't help but root for her. It was hard not ride along with her determination to dominate in chess, all while being helped by (and winning over) male characters.

"The empowerment of people of color and women made Bridgerton feel accessible and contemporary, resonating with audiences all around the world," said Howe. The Regency drama, alongside The Queen’s Gambit and even Emily in Paris, drew upon "themes that are universal yet speak directly to women because they feature independent-minded female protagonists in lead roles," Howe said, laying it all down simply. Looks like there'll be more great shows to expect in the future!

Adventurer Savvy Netflix Streaming Services Bridgerton The Queen's Gambit Explainer Staying In
Your Guide to Thriving in This Strange New World
Staying
In? What to watch, what to eat, and where to shop from home
OR
Heading
Out? What you need to know to stay safe when heading out