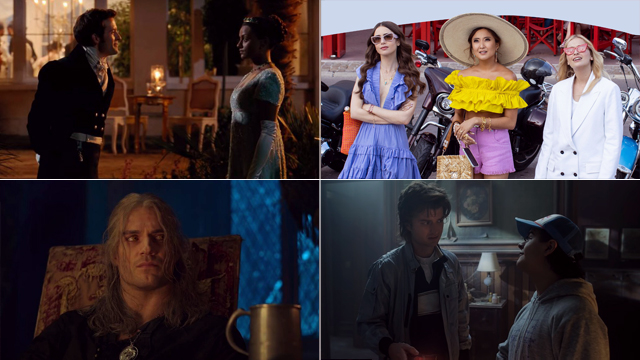 (SPOT.ph) Netflix is coming in strong with a whole slew of new clips and teasers from the most exciting titles! The massive online TUDUM! event finished on September 26 local time—and with it came sneak peeks, new clips, first looks and finally, release dates for some of the biggest titles on their slate. From a scathing new clip from Bridgerton Season 2 to a peek at Stranger Thing's newest setting, we round them up below.

Also read: 10 of the Biggest Films Coming to Netflix Before 2021 Ends, Ranked By How Much It'll Make the Year Suck Less

Check out the exciting new clips from the Netflix TuDum event:

"Your character is as deficient as your horsemanship. I shall bid you goodnight," or in other words: "Your personality's just as shit as your horse-riding skills. Bye, boy." Now that was a take-down. We got our first look at Bridgerton's next main couple—Anthony (Jonathan Bailey) and newcomer Kate (Sex Education's Simone Ashley)—and the tension is already bursting at this one clip. The second season will take us through the Viscount's quest for his own match, leading him to clash with his intended's feisty older sister Kate. We don't know how they'll top the first season's "I burn for you" dialogue but hey, this horse-related burn sure shows a lot of promise.

OG watcher's of this classic anime will know that the jazzy soundtrack was part of why it was so, so good—so you'll be happy to know that they're keeping the music alive for the live-action remake! The "Tank" theme was brought back for the Netflix-version title sequence, which includes both cartoon and live-footage. The new Spike Spiegel is played by John Cho, Jet Black is played by Mustafa Shakir, and Faye Valentine is played by Daniella Pineda. Original composer Yoko Kanno is on board too!

#RakeLives! Looks like that river water had some strange healing magic, as seen in the sequel's first clip. Details as to what this mercenary will be up to now—especially seeing as the rest of the world thinks him dead—have been kept under wraps. With Chris Hemsworth calling the first movie the "most exhausting ride" ever though, we're sure this follow-up will be just as intense.

Joe Exotic is back! Netflix released this hilarious clip to announce their follow-up on the Tiger King's strange life—and we honestly still don't know what to expect. The first documentary caught everyone by surprise. The clip does show Exotic in prison, too, so who knows, we may finally get some clarity on this insane true-crime case, if you can even call it that.

We got two whole clips from The Witcher's second season, both revolving around our favorite witcher Geralt of Riviera (Henry Cavill) and Princess Ciri (Freya Allan). The first season's ending had the three main characters, Geralt, Ciri, and Yennefer (Anya Chalotra), finally in the same timeline—which means the second season will delve into that prophecied link Geralt and Ciri have.

The ultimate escapist series is coming back with even more ridiculous escapism vibes! Yup, love it or hate it, people can't seem to get enough of Emily (Lily Collins) and her overly-perfect life. This time, it looks like everything will work out so well for her that she'll end up having the time of her life vacationing in idyllic Saint-Tropez, along with her besties—and a new boy, an expat who is probably just as infuriating and entertaining as Emily, sometimes.

Hold up, did anyone else get extreme Haunting of Hill House vibes here? Stranger Things Season 4 is introducing a whole new set of characters, the Creels, and their creepy house. The gang—Mike and Eleven are pointedly not in this teaser—are on some strange quest to find out the secrets of Creel House; The father, Victor Creel (Robert Englund) was a patient of Pennhurst Mental Hospital, imprisoned there after a gruesome crime in the 1950s.

Adventurer Savvy Seasoned Netflix Streaming Services The Witcher Emily In Paris Bridgerton Stranger Things Staying In
Your Guide to Thriving in This Strange New World
Staying
In? What to watch, what to eat, and where to shop from home
OR
Heading
Out? What you need to know to stay safe when heading out