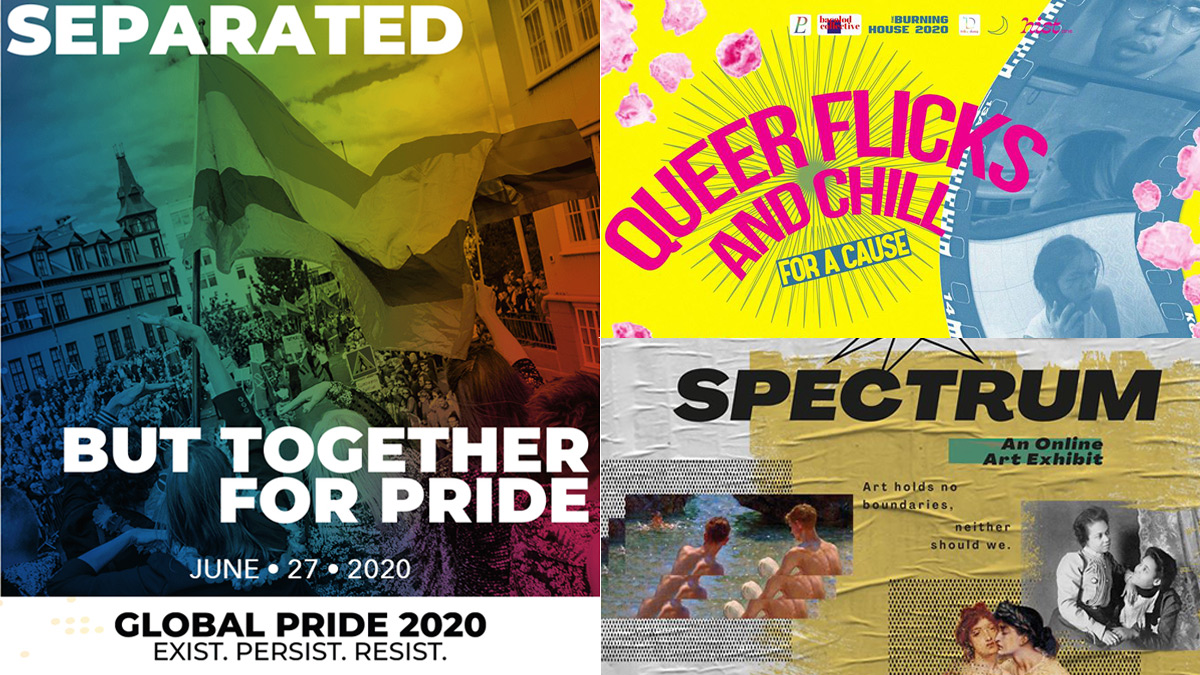 10 Ways You Can Celebrate Pride Month From Home

Here and across the globe!

(SPOT.ph) Every year on June 28 (or every third weekend of June), members of the LGBTQ+ community and their allies march on the streets in their most fabulous outfits, rainbow flags, and colorful placards bearing calls for equality and justice. This is the annual Pride March, a global event that commemorates the momentous uprising of lesbian, gay, bisexual, and transgender persons following a police raid at a gay bar in New York on June 28, 1969.

The Stonewall Riots, as it later became known, marked the start of the long-standing LGBTQ+ rights movement. And while people around the world can’t all leave their homes and march with pride this month, there are a lot of virtual celebrations to celebrate Pride for what it really is—a protest, raising of awareness, and a fight for equal rights.

Check out these 10 virtual events that celebrate Pride Month:

It's not always easy to be queer in a traditional country like the Philippines. In an effort to promote visibility, director Samantha Lee (Baka Bukas and Billie and Emma) and photographer BJ Pascual make use of their art to champion positive representation of the LGBTQ+ community. On Being Queer is a short chat about their journey as queer artists. Registration is required.

What: Webinar
When: Every Tuesday and Thursday of June
Where: Love Yourself Facebook page

Non-profit organization Love Yourself Inc. and Megaworld Corporation come together for a six-part online talk show that tackles LGBTQ+ issues. This series is streamed online every Tuesday and Thursday at 8 p.m. The first episode kicked off on June 9 and featured three lesbian women who shared their journey towards self-acceptance.

What: Online Art Exhibit
When: June 8 to 15
Where: Benilde Hive Instagram page

What: Live reading
When: June 19, 1 p.m. to 3 p.m.
Where: UP Center for Women's and Gender Studies Facebook page

In July 2019, Mulat Sulat launched five storybooks that talk about equality and inclusivity of all sexual orientations, gender identities, and expressions. It's targeted not only to children, but also to teachers who want to use SOGIE-inclusive materials in the classroom. The UP Center for Women's and Gender Studies' upcoming live-reading session will feature these books. Registration is required for this event.

What: Web series
When: Every Wednesday, 7 p.m.
Where: PNU Katalonan Facebook page

Philippine Normal University's LGBTQ+ organization Katalonan cooks up an interesting web series that gives an in-depth discussion on everything you need to know about SOGIE. It also hopes to debunk misconceptions and stereotypes about the community.

What: Webinar
When: June 20, 3 p.m.
Where: Benilde Hive Facebook page

Performances in night clubs and comedy bars are often done by drag queens, a person—often male—who dresses up in gowns and dresses and applies makeup. But doing drag has become so much more than entertainment and performance, and has become a way of self-expression. Find out more about the art of drag through this online talk on its history and roots.

What: Film streaming
When: June 15, 2 p.m. to 5 p.m
Where: UP Center for Women's and Gender Studies Facebook page

Often compared to Ang Pagdadalaga ni Maximo Oliveros, Ang Huling Cha-Cha ni Anita is about 12-year-old Anita (Teri Malvar) who develops a crush on an older woman named Pilar (Angel Aquino). It is set in rural Obando, Bulacan, a town famous for the Fiesta of Santa Clara, and tackles themes of teenage pregnancy, abortion, and seduction. On June 15, the UP Center for Women's and Gender Studies and CineFilipino are hosting a one-time screening of the award-winning film plus a short talk with director Sigrid Andrea Bernardo. Make sure to register so you can join this event.

Lgbt Pride Month Pride March Free Things To Do Guide Events
Your Guide to Thriving in This Strange New World
Staying
In? What to watch, what to eat, and where to shop from home
OR
Heading
Out? What you need to know to stay safe when heading out