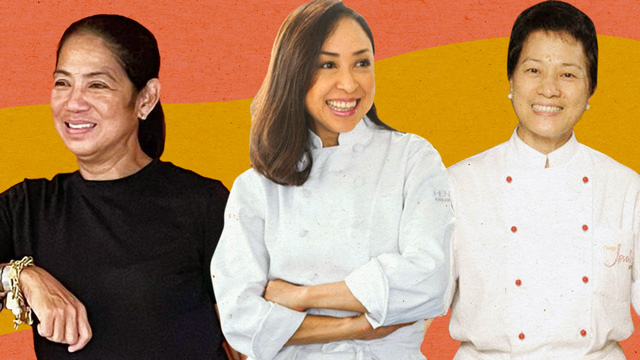 Wonder Women: The Filipina Chefs You Should Know by Now

The local culinary scene wouldn't be the same without them.

(SPOT.ph) The professional kitchen has, for the longest time, been a male-dominated industry—which is pretty ironic, considering how cooking in the home setting is traditionally considered a “feminine” activity often associated with our mothers, grandmothers, great-grandmothers, and so on. It’s time we celebrated the many skilled, brilliant, and creative female chefs in the Philippines, who prove time and time again that women are beyond capable of reaching culinary success.

Behind the famed Chef Jessie restaurants is the eponymous Chef Jessie Sincionco, who got her head start in the '80s as she won the grand prize in the baking category of The Great Maya Cookfest. She was soon offered a special pastry training course at the Hotel Intercontinental Manila and became their First Filipina Pastry Chef in 1990, and eventually got awards from culinary competition Chefs On Parade (where she won the coveted Gold with Distinction and L’Assiete D’Or trophies). She sought to enter the restaurateur world as she opened Le Soufflé in Greenbelt in 1991. Sincionco also established JCS Gastronomie Inc. in 2009, and opened upscale establishments Top of The Citi by Chef Jessie (which is now closed), Chef Jessie Rockwell Club, and Chef Jessie’s Place.

Chef Margarita Fores needs no introduction—her restaurants Cibo, Grace Park, and Lusso are all known for serving stellar food in their respective genres (Italian, Filipino-leaning farm-to-table, and French, respectively). It’s no wonder she was hailed Asia’s Best Female Chef in 2016! Early in her career, Fores was in the fields of finance and fashion, but her experience working for Valentino in New York led to her infatuation with everything Italian—the cuisine included, of course—and soon began cooking Italian food for her family and friends. She traveled to Italy and immersed herself in the culture, learning how to cook from three signoras rather than going to cooking school. It’s worth noting how she takes the Italian philosophy of using and highlighting what’s fresh and in season, but as applied to Filipino ingredients.

Chef, Philippine Daily Inquirer columnist, and consultant Reggie Aspiras started cooking at the tender age of six. She soon took courses under celebrated chef Sylvia Reynoso-Gala, and was encouraged to study more about the culinary craft in Europe by chef and restaurateur Beth Romualdez. Upon returning to the Philippines, she worked as a creative consultant for The Plaza Catering and soon opened her own restaurant, Reggie’s Bistro—but realized running a restaurant was not for her. Instead, she went into teaching, establishing the Reggie Aspiras School of Culinary Arts in 1991. She’s also worked as Chef Consultant for the United States Department of Agriculture, the Agricultural Trade Office in Manila, and San Miguel Purefoods.

Chef Bettina Arguelles is the first Filipina Executive Chef of the Sofitel Philippine Plaza Manila’s household buffet Spiral. Arguelles first joined the Sofitel team in 2013, beginning as a French Sous Chef for Spiral and soon becoming Spiral's Restaurant Operations Chef. She also has experience as Executive Chef at the InterContinental Singapore Robertson Quay, and was awarded the Female Chef of the Year at the 2019 World Gourmet Awards in Singapore.

Miko Calo is the chef and superwoman behind modern French establishment Metronome. She grew up in Butuan and has always been into cooking, eventually taking up Hotel and Restaurant Management at St. Scholastica’s College Manila. She soon interned for the Tivoli of the Mandarin Oriental Hotel and worked for the Hyatt Hotel and Casino Manila, before pursuing further French culinary studies at the L’Ecole Française de Gastronomie. Most notably, Calo went on to work for the acclaimed L’Atelier de Joël Robuchon restaurant empire—as a stagiare at its Paris outpost, as commis at the London outpost, and as junior sous chef at its Singapore outpost.

Chef Waya Wijangco owns Gourmet Gypsy Art Cafe, which is known for its globally influenced eats. It also serves as a training ground for the students of the Open Hand School for Applied Arts, which Wijangco also co-founded. The said school caters to teenagers and young adults with special needs and helps them gain skills to become independent and be able to support themselves. Although she’s always loved cooking, Wijangco shares that she got into the food industry by “accident” as a friend of her dad ordered food from her for his birthday, and she ended up catering his dinner. From that dinner, she got more and more bookings for catering. Wijangco opened her first restaurant, Kiss the Cook, in 2008 (it’s since closed); and the first branch of Gourmet Gypsy Art Cafe in Roces Avenue in 2014.

Formerly the Executive Chef of Hey Handsome and the Research and Development Manager of the Standard Hospitality Group, Chef Quenee Vilar co-founded delivery-only ventures Sambar and TK Kitchen with Chef Nicco Santos. Together with Santos, she’s known for cooking up bold, flavorful dishes with East and Southeast Asian influences.

A known celebrity chef, Myrna Segismundo was among the first Filipino chefs to present at culinary conference Madrid Fusion in Spain. She grew up with a food-loving family in Lipa, Batangas, and did not attend formal culinary schooling, instead basing her taste the flavor profiles and memories of her childhood. Segismundo champions Filipino cuisine, not only on a global stage, but also by emphasizing that we Filipinos ourselves should be proud of it.

Chef Tippi Tambunting cooks up contemporary takes on continental fare at M Dining & Bar (formerly Masseto). Prior to the restaurant’s opening in 2009, Tambunting enrolled in a professional cooking course at the Culinary Institute of America and interned under restaurateur Daniel Mogul. In 2015, she even cooked for Pope Francis during his visit to the Philippines.

Chef Natalia Moran is the culinary consultant for The Sunny Side Group and Tasteless Group of Restaurants—some of the restaurants she handles are The Sunny Side Cafe, Granivore, and PizzaExpress. She’s there to lend a helping hand, too, helping raise funds and cooking for medical frontliners in light of the pandemic in 2020. Moran shares that she was introduced to cooking in grade school as both her grandmothers were home cooks; eventually started cooking for family and friends before taking up Hotel, Restaurant and Institution Management in the University of the Philippines and going to cooking school in Florence, Italy.

Heny Sison is practically a household name here in the Philippines and is hailed for her stunning cakes and pastries. More notably, she’s known for passing on her vast culinary knowledge through the Heny Sison Culinary School. While Sison graduated with a Social Science and Political Science bachelor’s degree and initially worked at a bank and a government agency, she decided to go the culinary (specifically, baking) route instead and took classes under Tess Isaac, Sylvia Reynoso-Gala, and Avelina Carbungco-Florendo—all established names in the local cooking world—before completing courses at the Wilton School of Cake Decorating and Confectionery in Illinois. Sison opened the Heny Sison School of Cake Decorating and Baking in 1985, and hosted TV show A Taste of Life With Heny Sison in the early 2000s. She also runs Ilocano establishment Victorino’s in Quezon City.

Women Women's Month Jessie Sincionco Margarita Fores Reggie Aspiras Bettina Arguelles Miko Calo Waya Wijangco Quenee Vilar Myrna Segismundo Tippi Tambunting Natalia Moran Heny Sison Chefs Female Chefs Adventurer Savvy Seasoned Staying In Filipina Chefs Greener
Your Guide to Thriving in This Strange New World
Staying
In? What to watch, what to eat, and where to shop from home
OR
Heading
Out? What you need to know to stay safe when heading out