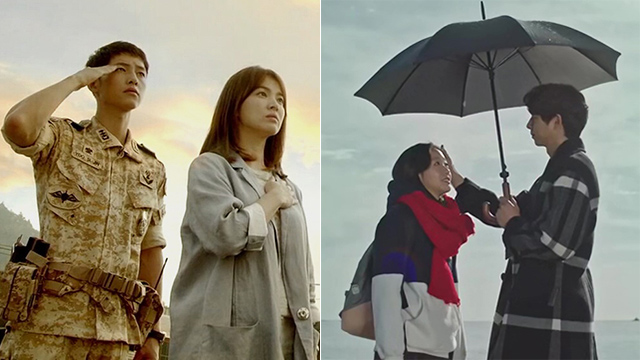 Including Descendants of the Sun, Goblin, and more!

(SPOT.ph) You'll never run out of K-Dramas to watch, but some titles stand out and cause a craze amongst casual viewers and hardcore fans alike. The 2000s gave rise to OG classics like Winter Sonata and Boys Over Flowers, but the 2010s also had its share of gems. Some of the most buzziest Korean series from 2016 to present are currently available on Netflix, which means you can stream these titles in a snap—whether you've been meaning to finally watch them or you're in the mood to relive the hype.

Who could forget the Song-Song couple? Captain Yoo Si Jin (Song Joong Ki) has a chance encounter with doctor Kang Mo Yeon (Song Hye Kyo), and the two agree to date. Due to the nature of their work, the pair struggles to spend time and begin to realize how different their philosophies are. They reunite on the field in Uruk and rekindle their feelings for one another, all the while getting their job done for the nation. Descendants of the Sun was a huge hit in South Korea, and is largely credited for the second Hallyu wave that got fans from all over the world interested in K-Dramas once more.

The young king of Goryeo dynasty kills his military general Kim Shin (Gong Yoo) after the latter was deemed a traitor. Years later, Kim Shin is cursed to remain immortal as a Goblin and must watch his love ones die to atone for the sins he committed during the war. In order to peacefully die, the Goblin's bride must pull the sword from his chest. Cheerful girl Ji Eun Tak (Kim Go Eun) summons the Goblin in present day, and the Goblin finds himself living with the Grim Reaper (Lee Dong Wook), all while looking for his bride. Series writer Kim Eun Sook—who wrote Descendants of the Sun and Lovers in Paris, to name a few—penned Goblin.

This 2018 satirical drama is a glimpse into the lives of South Korea's elite in a residential area called SKY Castle in Seoul, where wealthy professionals live. Four housewives (Yum Jung Ah, Lee Tae Ran, Yoon Se Ah, and Oh Na Ra) are committed to make their husbands look good, and will stop at nothing to get their kids into top universities with the help of their money. Sky Castle is the highest-rated drama in Korean cable television history, and has been praised for using dark humor to discuss important issues in Korean society like entrance examinations, college admissions, and ethics in the medical field.

If you love zombies and a good plot twist, Kingdom is for you. The power-hungry Queen Consort Cho (Kim Hye Jun) and her father Cho Hak Ju (Ryu Seung Ryeong) are adamant on keeping the throne from Crown Prince Lee Chang (Ju Ji Hoon). As the king falls, a mysterious disease plagues Joseon, turning normal citizens into flesh-hungry zombies. The show's a peek into Korea's history and gives you a dose of suspense and gore with political manipulation on the side. Season 2 of the series is out, and if you haven't watched yet, this is your sign to do so.

Crash Landing on You dropped in December 2019, but has been talk of the town straight into 2020 thanks to the beautiful locations featured in the show and the undeniable chemsitry between its two lead actors. So much so that it has succesfully landed itself in Netflix's daily Top 10 every day since the feature's launch. After a paragliding accident, South Korean heiress Yoon Se Ri (Son Ye Jin) finds herself in the last place she wants to be in—North Korea. Captain Ri Jeong Hyuk (Hyun Bin) spots her and protects her after her crash landing, with plans to return her safely to the other side of the border. But as friendship blooms and feelings develop, the two find themselves deviating from the plan.

Goblin Descendants Of The Sun Sky Castle Kingdom Crash Landing On You K-dramas Korean Dramas Netflix Adventurer Savvy Seasoned
Your Guide to Thriving in This Strange New World
Staying
In? What to watch, what to eat, and where to shop from home
OR
Heading
Out? What you need to know to stay safe when heading out