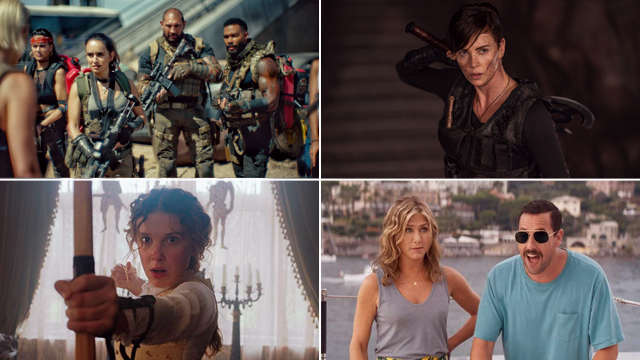 Not that we're European or anything, as Bianca said.

(SPOT.ph) Army of the Dead has hacked its way into the list of Netflix's 10 most-watched original films—whether you loved it or hated it, you can't deny the zombie heist film made a killing with the numbers. Zack Snyder's introduction to an epic new world was well on its way to be watched by 72 million households barely two weeks after the movie dropped, reported Deadline on May 28.

This lands Army of the Dead (AOTD) on the number 10 spot on the list, tied with the introspective apocalypse flick The Midnight Sky. Unsurprisingly, or surprisingly (depending on where you stand), Netflix's slew of most-watched original films are full of their biggest, hyped-up projects so far. We don't know what we expected either. The latest stats are based on the number of households that watched the movies within the first four weeks—find out if your fave made it to the list below:

Record-breaker: It hasn't been confirmed by the streaming service just yet, but all signs point to it breaching the 72-million households mark at the end of four weeks on the platform.

The gist: Enter Zack Snyder's alternate reality through AOTD. The movie picks up a couple of years after a zombie outbreak turned Las Vegas into the domain of an alpha race of sorts. War hero Scott Ward (Dave Bautista) is set to return to his old battlefield with a ragtag crew to retrieve a ridiculous amount of money for a sketchy billionaire—before the U.S. government nukes the entire place.

The gist: George Clooney plays a disgruntled old scientist with a terminal illness who chooses not to join humans as they try and escape the Earth's death. Except he discovers that a child has accidentally been left behind. Expect more emotions and thoughts than that visceral fight-or-die effect you would usually get from apocalypse movies.

The gist: Set in the city of New Orleans where the strange new drug, simply called "Power," is wreaking havoc on the streets, Art (Jamie Foxx) is on the hunt for its source. He ends up tracking down the syndicate with the help of Frank (Joseph Gordon Levitt), a police detective, and Robin (Dominique Fishback), a teenager from the so-called "wrong" side of town.

The gist: Millie Bobby Brown pretty much paved the way for this captivating new angle to the classic British detective's story, as based on the books by Nancy Springer. In it, she plays Sherlock Holmes' surprise younger sister who goes out to find her missing mother—only to find a bigger ploy than she ever imagined. With a stellar cast consisting of Brown, Helena Bonham Carter, Henry Cavill, Sam Claflin, and more, it is definitely worth a watch.

The gist: Charlize Theron kills it as Andromache of Scythia (a.k.a. "Andy"), the leader of a bunch of immortals living it out in our modern world—who finally comes to realize that truly, nothing lasts forever. The movie was based on the acclaimed comic-book series of the same name.

The gist: Looks like the the Adam Sandler-and-Jennifer Aniston combination isn't losing its magic anytime soon. In this comedy-mystery mash-up, they play an American couple who end up entangled in well, what else but a murder mystery aboard a mysterious rich man's yacht during a trip to Europe.

The gist: Ryan Reynolds in an action movie directed by Michael Bay. That's really all you need to know. But seriously speaking, Reynolds plays an ultra-rich billionaire who fakes his own death to become a vigilante, recruiting five other highly-skilled people—who all remain anonymous as they take down the crime world's "untouchables."

The gist: Okay, so this movie had way more than just Post Malone's cameo as a convict. This action-comedy sees ex-con and ex-cop Spenser (Mark Wahlberg) team up with Hawk (Winston Duke) to uncover a sinister conspiracy in behind the death of two Boston cops.

The gist: Hollywood royalty Sandra Bullock pretty much blessed Netflix with its first ever massive blockbuster original via the tense horror flick Bird Box. Chances are you've already watched the post-apocalyptic flick, but for the uninitiated, Bullock plays Malorie, a woman in charge of getting two kids and herself to a potential safe haven amid a world now plagued by monsters you can't look at.

The gist: And sitting at the absolute top of most-watched movies is the action-packed Chris Hemsworth starrer, Extraction. Hemsworth lets go of Mjolnir for a bit to take on the role of Tyler Rake, a black-market mercenary hired to rescue the kidnapped son of an imprisoned crime lord.

Adventurer Savvy Seasoned Netflix Streaming Services Army Of The Dead Project Power The Midnight Sky Enola Holmes The Old Guard Murder Mystery 6 Underground Spenser Confidential Bird Box Extraction Staying In
Your Guide to Thriving in This Strange New World
Staying
In? What to watch, what to eat, and where to shop from home
OR
Heading
Out? What you need to know to stay safe when heading out