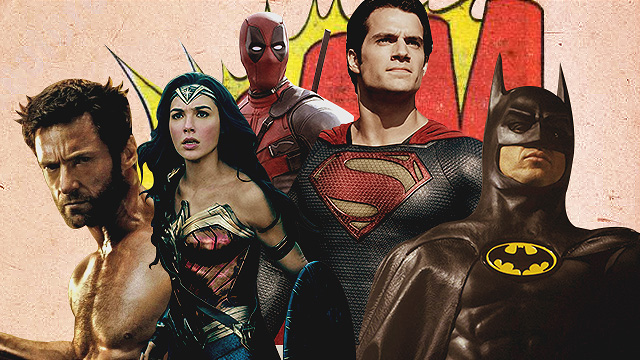 10 Action-Packed Superhero Films You Can Stream on Netflix Now

(SPOT.ph) With everything going on in life, you might be wishing for rather oddly specific abilities like magically skipping traffic, having just enough loose change in your pocket, or even perfectly cracking an egg every single time. While those are all great, traditional powers—like telekinesis, super strength, invisibility, and flight—found in comics and movies are the product of childhood dreams and are still just as cool today. Countless superpowered heroes have saved the planet and more, and it’s always a thrill to see them flex their powers in action-packed sequences. You might never be a superhero yourself, but you sure can dream when you watch these films.

Top 10 Superhero Shows You Should Be Watching Right Now

Check out these must-watch superhero movies you can stream on Netflix:

Black Panther melds traditional African culture and technological advancements, all nestled in the fictional country of Wakanda. Prince T’Challa (Chadwick Boseman) promptly returns to Wakanda after his father’s death to assume the throne, along with the title and abilities of the Black Panther. His new role is a huge responsibility, but it’s made even more difficult when enemies smuggling the country’s precious vibranium come to seek revenge. This is the 18th film in the Marvel Cinematic Universe and also stars Michael B. Jordan, Lupita Nyong’O, and Angela Bassett, to name a few.

Get to know the story behind the superpowered woman of truth and justice. Before becoming Wonder Woman (Gal Gadot), Diana was the princess of Themyscira, home to the Amazonian warriors that protect the Earth. American pilot Steve Trevor (Chris Pine) crash lands on the island and he tells her of the perils the rest of the world faces. Determined to help, she sets foot outside her home and fights in a war that unleashes her full powers and potential.

There are several Spider-Man adaptations and you’ve probably got your fave, but who says you have to choose just one? This animated Spidey flick sees new neighborhood Spider-Man Miles Morales (Shameik Moore) slip into the role and seek help from his fellow Spider-Men (Jake Johnson, Hailee Steinfeld, John Mulaney, Kimiko Glenn, and Nicolas Cage) from alternate universes. Their different styles and personalities come together in the Spider-Verse, making for a fun flick filled with inventive visual elements. Mahershala Ali and Liev Schreiber also lend their voices to the film.

If you like your superheroes rough around the edges with a dark sense of humor, Deadpool’s the flick for you. Mercenary Wade Wilson’s (Ryan Reynolds) life is all good once he meets the love of his life, Vanessa (Morena Baccarin). But just as things are looking up, he’s diagnosed with cancer. He’s offered a cure to his illness, and he becomes the lab rat of Ajax (Ed Skrein), who instead activates regenerative abilities within Wade. The operation has negative side effects, and Wade hunts him down to reverse the process.

There are several films in the X-Men film series, but it's Days of Future Past that will take you on a wild ride across the franchise’s timeline. Sentinels are intelligent robotic weapons and developer Bolivar Trask (Peter Dinklage) has programmed them to exterminate mutants, which he believes are a threat to mankind. In 2023, a small group of X-Men communicate with the X-Men of the past to warn them of attack, and to change the course of history. Wolverine (Hugh Jackman) volunteers to go back to 1973 to try and set things right. The film also stars James McAvoy, Michael Fassbender, Jennifer Lawrence, and Nicholas Hoult.

The Green Lantern Corps have been around for centuries and are committed to maintaining intergalactic peace, with each Green Lantern assigned a sector of the universe to monitor. Arrogant test pilot Hal Jordan (Reynolds) is chosen to join their ranks, much to the dismay of the other Green Lanterns, and while he’s not very good at being one himself, he will have to learn to harness the ring’s power in order to protect Earth. Blake Lively, Peter Sarsgaard, Strong, and Bassett also star in the DC Comics film.

The voices in your head are hard to turn off—especially when they happen to be an alien force trying to take over your body. Journalist Eddie Brock (Tom Hardy) plans to expose Life Foundation’s shady secrets, but his investigation leads him to merge with alien Venom, which gives him superhuman abilities. Venom tries to control his new host and offers him a chance to live provided that he helps aliens invade Earth, but as Venom interacts with the world using Eddie’s body, he slowly begins to change his mind about Earth and its inhabitants.

This old-school superhero flick is the first installment in the Batman series and stars Michael Keaton in the titular role. The 1989 version first introduces millionaire Bruce Wayne, and explores how he came to adapt the vigilante alter ego. It’s also the first time you’ll see the Joker (Jack Nicholson) in a film, and you’ll get to know more about the mad clown’s origin story. The OG movie might not have special effects and death-defying stunts of more recent Batman films, but it still holds its ground as the foundation of the Batman franchise.

This list wouldn’t be complete without the OG spandex-rocking, cape-wearing, and chisel-chinned man of muscle: Superman. The 2013 version stars Henry Cavill as the man of steel and is a reboot of the Superman film series that explores Clark Kent’s origin story. Chief adviser Jor-El (Russel Crowe) is doing everything he can to save the planet of Krypton, but seeing as it’s impossible, opts to send his only son Kal-El to planet Earth to preserve their race. He lands on Jonathan (Kevin Costner) and Martha’s (Diane Lane) yard, who welcome him into the family. Years later, old foes invade Earth, and Clark must use his powers to save Earth.

Not all heroes have to be super. Ordinary teenager Dave Lizewski (Aaron Johnson) is determined to fight crime without any special powers. Taking inspiration from his favorite comics, he designs a costume and calls himself Kick-Ass. Father-daughter duo Big Daddy (Nicolas Cage) and Hit-Girl (Chloë Grace Moretz) join him to deliver justice using their badass human skills. Their desire to do good hits the nerve of mafia boss Frank D’Amico (Mark Strong), who wants them dead and out of his way.

Black Panther Wonder Woman Spider Man Into The Spider Verse Deadpool X Men Days Of Future Past Green Lantern Venom Batman Man Of Steel Kick Ass Netflix Streaming Services Adventurer Savvy Seasoned Guide
Your Guide to Thriving in This Strange New World
Staying
In? What to watch, what to eat, and where to shop from home
OR
Heading
Out? What you need to know to stay safe when heading out