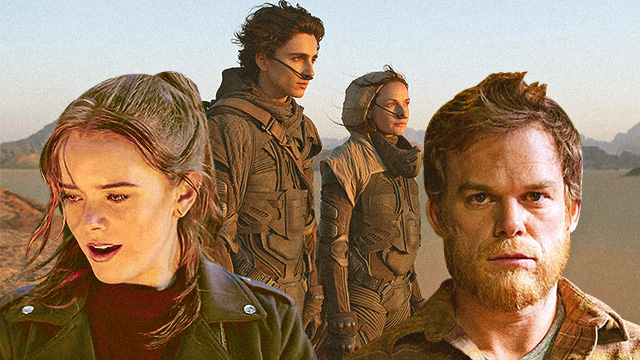 Nostalgia Alert: 10 Reboots and Revivals That Have Us Excited for 2021

Check out when Rugrats, Gossip Girl, and more are scheduled to drop!

(SPOT.ph) Remember the good old times? You know, everything that happened before 2020? Well, we may not be able to bring those back—but we can at least look forward to a blast from the past courtesy of old-school titles coming back to the screen! We round up shows and movies that were definitely part of your screen time growing up—and are making an epic comeback.

Also read:
10 '90s Sitcoms You Can Stream for a Fun Flashback
10 No-Fail Series to Watch Again and Again, According to Spotters
The Serious List: Your Guide to What to Watch Now

Put these 10 movies and TV remakes on your watch list for Revivals Coming in 2021:

Netflix is kicking the year off with a darker reimagining of the brightly hued Winx Club! Remember Bloom and the fairies of Alfea (and those ridiculously tiny waists)? Well, it looks like you can expect a more realistic version of the popular Italian cartoon—or at least as realistic as teenage fairies battling evil forces can get—through this Netflix Original. This reimagining, with the OG animator and comic book author Iginio Straffi on board as executive producer, follows the slew of “teen drama”-fied series (think Riverdale and The Chilling Adventures of Sabrina) from Netflix so we can’t wait to see how they change things up!

The '80s are back in a huge way. Just take this big-ticket reboot of the 1984 sci-fi adventure classic Dune starring Timothée Chalamet! Based on the classic novel by Frank Herbert, it follows the aristocratic Atreides family as they struggle to keep control of the desert planet Arrakis, a.k.a. Dune, the only source in the entire known Universe of the life-extending substance "the spice." The movie was one of the huge sure blockbusters pushed back during 2020 and is now slated for a theatrical release in the U.S. in October 2021. Fingers crossed it will stream on HBO Go as well.

Oh yes, she’s back, baby. We’re sure you saw those pictures of the new cast of Upper East Side high-schoolers on the Met steps. Anyone else get peak Gen Z feels? The Gossip Girl reboot is another exciting title coming to HBO Max; it was meant to drop in 2020 but was pushed back to 2021. The upcoming series picks up around eight years after the OG Gossip Girl site went down and will revolve around a new generation of private school kids picking up the social surveillance site.

We know it’s been nearly a decade since Dexter left us with a, erm, very-talked about ending in 2013, and yes, we know we’re not alone in saying we aren’t happy with how it all went down. Thankfully, Showtime has revived the bloody serial killer drama! The upcoming series will pick up around 10 years after Season 8’s shenanigans and will hopefully tie up all the loose ends we’ve been thinking about for years.

Are you ready for a CGI Tommy and gang? Well, ready or not, Nickelodeon has both a TV series reboot and a new movie coming in 2021. The movie, which was supposed to have dropped in November, has been "indefinitely shelved" while the 26-episode season is pushed back to 2021. The OG 1991 series is one of those cartoons that were truly top tier—so we can’t wait to see how “Next Gen Nick” will reimagine the classic characters.

Don’t lie: You still can’t get enough of Friends. The much-awaited unscripted special reunion of our favorite Central Perk gang just keeps getting pushed back—but fingers crossed 2021 is the year it finally happens! Mathew Perry (Chandler Bing) took to Twitter in November to finally give us an update: the Friends reunion will film in March 2021. There’s no final word yet on the release, but it was supposed to have coincided with the launch of HBO Max earlier in May—which we're taking as a sign that the reunion drops earlier rather than sooner!

Yup, Nickelodeon is on a roll! This time they’re making a reboot for the 2000’s kids: iCarly. OG cast members Miranda Cosgrove (Carly herself), Jerry Trainor (wacky and well-intentioned older bro Spencer), and Nathan Kress (good old Freddie), are coming back for a revival of the series. The revival is set to drop on Paramount’s incoming streaming service CBS All Access in 2021.

It’s official! After two directorial changes and three lead-star changes, we will finally see this Darna remake on our screens in 2021. ABS-CBN announced the change of plans after movie production was halted by the pandemic, opting instead for a series. Jane de Leon will still get to play the ever-popular Pinay superhero. This ABS-CBN remake has been in the works since 2014, so we can only expect something huge from this production.

Camilla Cabello as Cinderella, Idina Menzel as the evil stepmother—and Billy Porter as Fab G, the fairy godmother (we see what you did there!). This 2021 musical comedy remake of the classic children’s tale is set to be as un-Disney as possible, complete with a star-studded cast chock-full of Broadway pros. Have we already mentioned Idina Menzel? Plus, note that the idea for this film was James Corden’s, and with him as producer, we can only expect quality content.

Don’t worry, we’re having a hard time processing this live-action and animation hybrid of our childhood’s most classic characters, too. This film stars Chloë Grace Moretz as a recent hire at a fancy hotel who unwittingly hires Tom to evict Jerry—you know, after decades of the cat unsuccessfully trying to do so—before a huge event! The mix of 2D and 3D looks convincing so far; at least the kiddies will know what we’re talking about when we reference the two best frenemies. This Warner Bros. flick is slated to open in U.S. theaters in 2021; fingers crossed it lands on our shores, too!