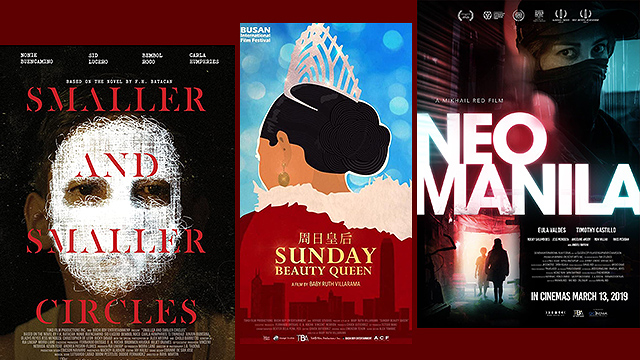 10 Local Films You Can Stream for Free

(SPOT.ph) These days, there are many ways to stay entertained (and keep sane) at home: you have workout classes to join and concerts and plays you can watch Filipino movies online for free. Movie buffs are also in for a treat as local film studios have made some of their titles available for free, in case you want to watch something that's outside of your usual streaming platform subscriptions. From coming-of-age stories to a nail-biting noir thriller Tagalog movies online, there’s something for you on this list.

Also read:
10 of the Most Fun Things You Can Do for Free Online
10 Free Online Concerts You Can Watch From Your Couch
10 Workout Studios Offering Free Online Classes

You can watch these local films for free online:

This eye-opening documentary gives us a glimpse into the lives of five Filipino domestic workers in Hong Kong. The women reveal their daily struggles—from dealing with demanding employers, enduring low wages, to providing for their loved ones back in the Philippines. It's the seemingly small things that help them cope: Every Sunday, they spend their time off doing makeup, wearing flashy gowns, and training for an annual beauty pageant. The documentary premiered at the 21st Busan International Film Festival and became an official entry to the 2016 Metro Manila Film Festival, where it won Best Picture.

This comedy-drama movie stars Rocco Nacino, Carlo Aquino, Enzo Pineda, and Kean Cipriano as Toran, Erik, Christian, and Joshua, respectively. All of them are students at a prestigious law school and together, they face the challenges that come with earning a law degree while maintaining their friendships and personal lives. They struggle through tough classes and terror professors like Justice Hernandez (Odette Khan) and her make-or-break recitations, pulling impossible all-nighters and doing their best to live up to family expectations.

Directed by Mikhail Red (Birdshot, Eerie), this dark neo-noir thriller tackles the Philippines' supposed war on drugs. It tells the story of Toto (Timothy Castillo), a teenage orphan, and his encounters with the police, drug dealers, and gangsters. To top it off, an altercation sends his junkie older brother to jail. With no one to turn to, Toto finds refuge in Irma (Eula Valdez), an assassin on the hunt for notorious drug dealers.

Dubbed as the first Pinoy stoner film, Super Psycho Cebu introduces us to The Idol (John Dino), who claims to be a shaman. He goes on a "spiritual" quest to acquire the SuperPsychoCebu, a fictional form of cannabis. Along the way, he encounters a variety of characters, like Pancho (Wes Bacareza), Sexy Samson (John Mark Maglana), Beauregard (Rapi Sescon), and a mysterious woman (Angelica Gamolo). Idol also comes face to face with God, who apparently is an amateur actor (Joshua Aquino) dressed up as Hesus.

That Thing Called Tadhana takes you on a spontaneous trip to places like Baguio and Sagada for some soul-searching. The film follows the unique encounter between strangers Mace (Angelica Panganiban) and Anthony (JM de Guzman) as they go through the process of mending their broken hearts. Mace is fresh out of a relationship, which prompts her to unload some emotional baggage with the help of Anthony. Their conversations deepen as they share what-ifs and bits of wisdom they've learned from their exes. Will Mace and Anthony be able to part and return to reality?

Based on F.H. Batacan's 2002 novel of the same name, this mystery-slash-drama revolves around two Jesuit priests, Father Augusto Saez (Nonie Buencamino) and Father Jerome Lucero (Sid Lucero), who are tasked by the NBI to hunt down the serial killer linked to the murders of several young boys in Payatas.

Where to watch: Studio B

Do you miss the JaDine tandem? If you feel like reviewing the reel-to-real history of one of the most popular local love teams, check out the movie that started it all. Based on the hit Wattpad story of the same title, Diary Ng Panget is a cross between Cinderella and Beauty and The Beast. Eya (Nadine Lustre) is a teenage orphan who gets kicked out by her aunt at the age of 18. Struggling to make a living, she finds a job as a maid to hot-tempered Cross (James Reid). With the two spending more time together, they develop romantic feelings but decide to keep it from each other. Along the way, Eya gets a makeover and comes to terms with her more confident self.

This 2008 Cinema One Originals entry tells the coming-of-age story of senior high-school students Lucas (Felix Roco) and Joaquin (Joseph Roble), who both dream of getting into a good university. The boys deal with the pressure that comes with taking the UPCAT (University of the Philippines College of Admissions Test) and planning out their college lives. It is a humorous take on how students prepare for the UPCAT and how to go about choosing a college course. Make it a point to browse through the comments section and you’ll find people sharing their own UPCAT stories, too.

In this Jerrold Tarog film, we meet a famous 30-something actress named Jane Ciego (Iza Calzado). During a shoot for her upcoming movie, Jane suffers a bad fall from a stunt, leaving her crippled and secluded in her own house. Unusual happenings drive Jane to the brink of insanity. Even under the care of her husband Carlo (TJ Trinidad) and caretaker Lilibeth (Adrienne Vergara), she feels trapped in a series of nightmares. This psychological thriller sheds light on stardom and its dark sides.

Days before college graduation, best friends Carson (Maja Salvador) and Dio (Paulo Avelino) spontaneously embark on a road trip to attend a music festival in San Juan, La Union. Carson intends to reveal her true feelings to Dio, but is caught by surprise as she sees Dio hanging out with a girl named Pathy (Jasmine Curtis-Smith) hours after they arrive in La Union. It’s a heartfelt film that will have you reminiscing about college life and hankering for some bagnet.

Con-00263 Adventurer Savvy Free Streaming Services Upcat Bar Boys Im Drunk I Love You Neomanila Diary Ng Panget That Thing Called Tadhana Smaller And Smaller Circles Bliss Super Psycho Cebu Youtube Sunday Beauty Queen Studio B Tba Studios Cinema One
Your Guide to Thriving in This Strange New World
Staying
In? What to watch, what to eat, and where to shop from home
OR
Heading
Out? What you need to know to stay safe when heading out