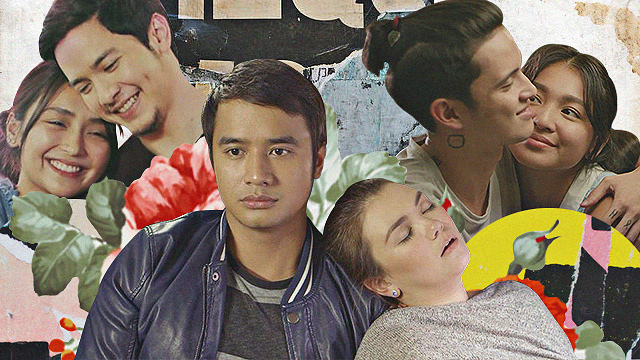 If you want to cry, fall in love, dream, and more.

(SPOT.ph) Pinoys know romance. If for some godforsaken reason you need proof, look no further than our movies. We could point to unbeatable classics like Sana Maulit Muli and Labs Kita, Okey Ka Lang?—not to mention the two-part Popoy and Basha series—but for this list, we round up films from recent years that have continued to reshape the genre (and get all the #hugot just right). Look, whether you like them or not, romance flicks are an integral part of life—fight us on this—and we have a couple of picks from the last few years that just can’t be missed. So bring out the tissues and prepare your hearts!

Bring out all the feels with the best Pinoy romance films you can stream:

Hugot wouldn’t even exist if this movie didn’t—there, we said it. Re-watching the painfully funny attempt of Mace (Angelica Panganiban) to get over her ex by dragging the innocent bystander Anthony (JM de Guzman) on a surprise road trip to Baguio City and Sagada never gets old. After all, where else would broken hearts go? Not only did this film put director Antoinette Jadaone on the mainstream map, but it also set the bar for all other romance flicks that would come after it.

Where to watch: iFlix

Director Nestor Abrogena hit everyone right in the feels with a film that tackles every masochist’s favorite topic: the non-relationship relationship. Sam (Nicco Manalo) and Isa (Emmanuelle Vera) are students whose lives are about to take-off: Sam has been offered the chance to fly to Berlin for a filmmaking fellowship, while Isa will soon migrate to the U.S.—and has a boyfriend (who is not Sam). So now they both have to figure out a way to end a relationship that was never actually real. This wonderfully slow-moving film hooked everyone enough for Abrogena to gift us with a sequel, Tayo Sa Huling Buwan ng Taon, in 2019.

Where to watch: iWant

This film directed by Samantha Lee was arguably one of the first to really push the LGBTQ+ movement to mainstream audiences. Alex (Jasmine Curtis-Smith) is falling for her best friend—sounds familiar, we know—except that she hasn’t even told Jess (Louise delos Reyes), the said best friend, that she happens to be lesbian. Baka Bukas is a relatable story whatever your sexual orientation is; It tells the story of a young adult who just wants to make it in the city—and hopefully, be with the one they love, too.

Don’t lie: You’ve said some pretty stupid shit while drunk—including “I love you.” IDILY tackles the college romance like no other. It follows the hopelessly-in-love Carson (Maja Salvador) as she goes on a road trip to La Union with Dio (Paulo Avelino), her best friend and unrequited love of seven years, before they graduate. Dio has effectively friend-zoned her, but as their last few days of being a student come to a close, it seems Carson isn’t about to give up hope.

This indie flick jumps far outside the box. Lea (Alessandra de Rossi) is a Filipino tourist guide who goes blind after witnessing her Japanese fiancé's infidelity—she then meets the happy-go-lucky Tonyo (Empoy Marquez), a Filipino who is also her neighbor, and the seemingly mismatched pair eventually fall for each other. Equal parts funny and painful, this hit made its way to become the highest grossing indie film in the Philippines; an Indonesian remake, Cinta Itu Buta (Love Is Blind), even came out in 2019.

This movie cemented the cult status of the JaDine pairing; The love team is currently on hiatus—we mean, has since broken up IRL which makes rewatching this even more bittersweet. Gio (James Reid) and Joanne (Nadine Lustre) are young, carefree, and in love. Their easygoing relationship is tested when their hopes and dreams lead them to different paths. The critically acclaimed film won Lustre the Outstanding Performance by an Actress in a Leading Role for the 2019 FAMAS Awards and Best Actress at the 2019 Gawad Urian.

What better time to release a heartbreaking romance film than on Valentine’s Day? This Antoinette Jadaone film follows the story of Christine (Liza Soberano) and Raf (Enrique Gil), two people who meet, fall in love, and break up during their student days, with plenty of their sweet moments set at the University of the Philippines - Diliman. They meet again eight years later as completely different people who have managed to make their dreams come true—more or less—but still, the question of “What if?” hangs heavy over the pair.

Kathryn Bernardo and Daniel Padilla had a slew of films before this Cathy Garcia-Molina movie, but The Hows of Us really cemented their acting chops and the undeniable chemistry. Primo (Padilla) and George (Bernardo) are a young couple in love. The two have their entire lives before them and they plan on spending it together; much easier said than done, as the two are forced on different paths to achieve their dreams.

Finally, we got to see the CarGel loveteam together again in Exes Baggage—a film which a little too aptly centers on moving on from past relationships. Pia (Panganiban) and Nix Cabangon (Carlo Aquino) are two strangers who enter into a relationship mainly so they could forget about their respective exes. Not a healthy start, we admit, but the film delivers top-tier #hugot dialogue that, when coupled with Ben&Ben’s “Maybe the Night,” makes for the perfect tearjerker.

Ranking high on our list of films to watch with an entire roll of tissue, Hello, Love, Goodbye pretty much wrecked audiences when it first came out—and it still does, TBH. Joy Fabregas (Kathryn Bernardo) and Ethan Del Rosario (Alden Richards) are Pinoys in Hong Kong who meet, and as always in these movies, fall in love—whether they’re destined to be together, we won’t say. The rich story delves beyond the rosy exterior of romance and into the harsh realities of working abroad—not to mention the choices people have to make between what they want to do and what they need to do. Bernardo and Richards are seen for the first time apart from their usual loveteams and the pairing makes for an unexpectedly honest performance. Hello, Love, Goodbye is, as of writing, the highest-grossing film in Philippine history.

Adventurer Savvy Streaming Services That Thing Called Tadhana Ang Kwento Nating Dalawa Baka Bukas Im Drunk I Love You Idily Kita Kita Never Not Love You Alone/together The Hows Of Us Exes Baggage Hello Love Goodbye Netflix Iwant Iflix Youtube Guide
Your Guide to Thriving in This Strange New World
Staying
In? What to watch, what to eat, and where to shop from home
OR
Heading
Out? What you need to know to stay safe when heading out