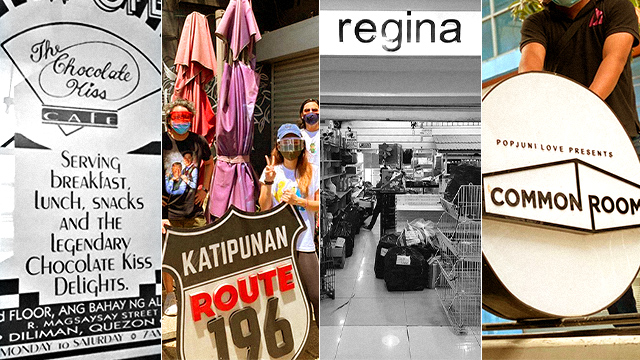 The restaurants, hangouts, and stores that have closed so far.

(SPOT.ph) Have you thought about what you’d tell your grandkids, if they ask what 2020 was like? The year definitely hasn’t been a nice one and to top it all off, it looks like the “back to normal” we’ve all been hoping for is not going to happen just yet. So to ease us all into accepting that fact—and because misery loves company—we list down a few of the places in Metro Manila that we’ll never see again even after the quarantine. The restrictions have not been easy on anyone and several industries have been severely affected, from restaurants, to retail stores, and more.

Also read:
What Do You Miss Most About Pre-Quarantine Metro Manila?
The Past, Present, and Future of Dining in Metro Manila

Time to say goodbye to these Metro Manila spots that have closed in 2020:

This semi-hidden spot along Don Chino Roces Avenue in Makati City has been a popular club in the city’s night scene since it opened in 2016. You might remember a wild night spent at either its sister bar 20:20 right beside it—or both—dancing along to local and international acts up until the early hours, and then stumbling over to Ministop in front of the La Fuerza compound to sober up. The club announced its closure on September 1.

The Katipunan area has always had Route 196 to depend on for its dose of wild nights and music—until they announced their closure on August 23. The live-music venue held one last virtual concert with acts like Ben&Ben, Itchyworms, Sponge Cola, and more on September 12 before officially saying goodbye.

Cubao Expo’s usuals are sure to feel the pain with this goodbye. This restaurant-slash-bar-slash-haven for the queer community and the arts said goodbye on June 18. They were originally located in Cubao Expo before they moved to their spot a block or so away along General Malvar Street in 2012. Their sister bar, Futur:st, remains open in Poblacion, Makati City.

From the night spots to the kiddie parties: mini-amusement park Fun Ranch announced their closure on June 3. All of their branches, from the OG one in Ortigas—with the unmistakable bright-red granaries—to the ones in Alabang, Muntinlupa City, and in San Fernando City, Pampanga, stopped operations a few months after the quarantine started in March. Jump Yard, the first indoor trampoline park in the country, announced its closure at the same time. Both were owned by entrepreneur Vince Padilla.

Kids and kids-at-heart had to say goodbye to another city playground: KidZania Manila. This indoor theme park in Bonifacio Global City announced their permanent closure on July 22 through a statement released by ABS-CBN. They first halted operations on March 11 due to the quarantine. The park was popular with kids and adults alike, especially for their “grown-ups” night when they let the big kids reign free on the playground—with drinks to boot.

This treasure trove of toys, knickknacks, fun gift items and more had been a go-to spot in the Greenhills Shopping Center for 43 years—and they broke several generations' hearts when they bid goodbye on June 7. Regina Gift Shop was the kind of place you went to when you weren’t really sure what you were looking for...and then you'd somehow end up buying way more fun stuff than you needed. Patrons of the store were pretty emotional when they announced their closure, and one Uriel Briones Cui even trekked to the shop for a final goodbye and took some farewell pics. Anyone else feeling affected by the the sight of the store's empty shelves? We know we do.

Another shop that’s sure to be missed is the Common Room branch along Katipunan Avenue. The fun store was a favorite hangout among students from the universities and schools around it. There were sometimes workshops and tutorials on a variety of arts and crafts—and who can forget that swing they once had outside their door? This hub was where you could find all kinds of cool stuff, from stationery to accessories, from different artists around the Metro. They officially said goodbye to their Katipunan branch on July 31.

Poblacion had to bid farewell to one of its defining shops this year: Pineapple Lab. This popular creative hub along Palma Street was where artists and audiences held shows, pop-ups, and workshops of different kinds. Pineapple Lab's creative director Andrei Pamintuan said goodbye through a Facebook post on August 8. While their group had to let go of their physical space, “We hang on to all the memories and lessons learned until we can make new ones again. Magkikita pa tayo pramis," wrote Pamintuan.

Yup, it looks like it might be time to say goodbye to this nostalgic hangout spot as The Chocolate Kiss Café announced that they would be closing on August 24. The café had been the go-to spot for folks in the University of the Philippines campus in Diliman since they first opened on the second floor of Ang Bahay ng Alumni in September 1997. This was the place for filling, home-style meals, excellent cakes, or—if you were a student on a budget—unlimited iced tea to accompany your study sessions. On the bright side, you can still order their cakes online! Don’t bid farewell to the Devil’s Food Cake just yet.

This store has been a part of the local comics scene since 1986 when they first opened up shop in the now-defunct Red Square Arcade in BF Homes, Parañaque City. They then branched out to Greenhills, Makati, and even SM Cebu, but their most popular branch was arguably the one at SM Megamall. We're sure you've dropped by at least once even if it was just to take a look at their collection of toys for sale. “We've had to make the difficult decision to begin the process of closing down Comic Quest,” they announced on their Facebook page on September 16, citing the difficulty of operating amid a pandemic.

Adventurer Savvy Seasoned Metro Manila City Life Route 196 Xx:xx Today X Future Fun Ranch Kidzania Regina Gift Shop Common Room Pineapple Lab Comic Quest The Chocolate Kiss Cafe Closures Restaurant Closures
Your Guide to Thriving in This Strange New World
Staying
In? What to watch, what to eat, and where to shop from home
OR
Heading
Out? What you need to know to stay safe when heading out