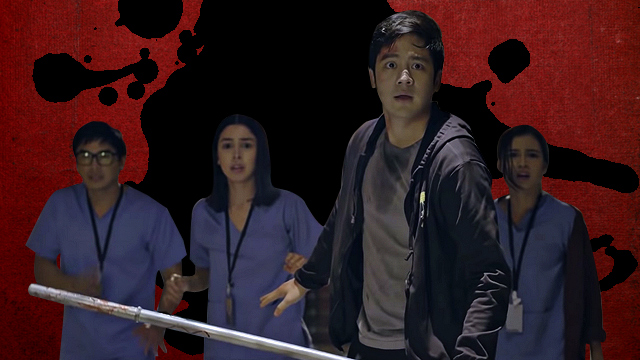 Zombies, a superhero, and more are set to hit cinemas.

(SPOT.ph) You would know by now that there’s no shortage of talent in the local film industry. Whether you’re into blockbuster films and hilarious rom-coms or the more unsettling pictures from independent film producers, Filipino cinema usually offers a wealth of options. We’re only on the first month of the year and we’re still counting on more releases, but we round up 10 flicks you might want to catch this year.

Director Yam Laranas is at the helm of this horror film starring Yam Concepcion, who plays a nurse assisting a mortician at the morgue. During her long and hellish shift, dead bodies seem to come to life, but everyone is convinced she’s just seeing things. More bizarre incidents transpire, but no one’s there to hear her scream.

A contagious disease rips through the country, effectively turning the Filipino population into flesh-hungry zombies. With no one left to protect them and the outside world in absolute chaos, a group of college kids (Julia Barretto, Joshua Garcia, Yves Flores, Myrtle Sarrosa, Maris Racal, and McCoy de Leon) take matters into their own hands and create a fortress out of their university. Ian Veneracion and Dimples Romana also star in this Mikhail Red film.

On Vodka, Beers, and Regrets

On Vodka, Beers, and Regrets marks the second time actors JC Santos and Bela Padilla are working together (the first being 100 Tula Para Kay Stella). Padilla's character recently got out of a relationship and spends her time drinking her bitterness away. She meets Santos’ character, a romantic boy who is more than ready to move mountains for her. As they try to figure out and define their vague relationship, people and regrets of the past catch up to them.

This 2019 film from American director Ben Rekhi made rounds in film festivals in the U.S., including the Seattle International Film Festival, but will eventually get a local release. Watchlist, or Maria as it’s known in festivals, stars Alessandra de Rossi as a woman who lost her husband to the Duterte administration’s “war on drugs.” With children to protect and her own life to live, she must confront evil forces within and beyond herself in order to survive. Art Acuña and Jake Macapagal are also part of the cast.

After Smaller and Smaller Circles, director Raya Martin now tackles the youth in his upcoming film Death of Nintendo. Set in the suburbs of Manila before the 1991 eruption of Mt. Pinatubo, the Black Sheep Productions project follows two boys as they graduate from kids to teens. Filled with '90s pop culture, coming-of-age rituals, and fun games, the two 13-year-olds realize there is no cheat code for growing up. The film is set to premiere at the Berlin International Film Festival.

We told you late in 2019 that Fan Girl starring Paulo Avelino and directed by Antoinette Jadaone has finished filming. Most of it is under wraps, but the plot revolves around a young girl who somehow ends up in the mansion of her idol (with Avelino playing a fictionalized version of himself) and realizes that who he is in real life is different from his celebrity persona. There were open auditions for the lead actress in this film, and it seems there’s no knowing who she is until the film’s trailer arrives. ABS-CBN confirmed the film’s 2020 release, so we'll find out soon enough!

Whether the Weather Is Fine

Starring Charo Santos-Concio, Daniel Padilla, and Francinne Rifol of idol group MNL48, Kun Maupay Man It Panahon (Whether The Weather Is Fine) explores the aftermath of typhoon Yolanda in the province of Tacloban. Not much is known about the film yet, but it is a collaboration between local and foreign studios, namely Black Sheep Productions, Quantum Films, Cinematografica, Plan C, Globe Studios, House on Fire from France, AAND from Singapore, KawanKawan Media from Indonesia, iWant, and Dreamscape Entertainment.

You probably know Mang Jose from the Parokya Ni Edgar song, but the Filipino superhero for hire is getting his own film from Project 8 corner San Joaquin Projects for VIVA Films. Produced by Dan Villegas and Jadaone, the film will star Janno Gibbs as the titular hero, Mikoy Morales as Tope, and Manilyn Reynes as King Ina, the Queen of Turborats.

Not much is known about De Rossi’s directorial debut, but if the trailer is anything to go by, it looks like she’s also starring in the film alongside Piolo Pascual in a romantic drama, with the relationship’s high and low points shot against the background of picturesque locations. The film is produced under Spring Films, which also happens to be Pascual’s production house.